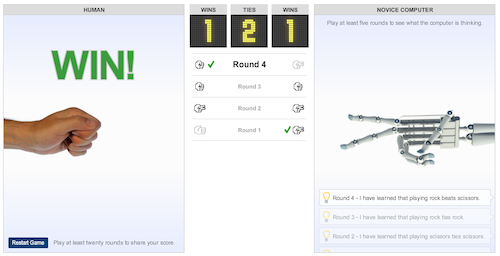 Anyway, the NY Times online Science section has shared an online game of “Rock, Paper, Scissors”, where you can play against a choice of computer opponents. The “Novice” opponent has no understanding of your previous moves or stratgey. But, the “Veteran” option has gathered data on over 200,00 moves, and will try to use its database to crush your spirit Here’s what we did.

Sarah Hagan links up the definition of a function to dating advice:

After this short conversation, I think I saw some light-bulbs come on. There was laughter, and I heard several girls discussing how they were going to ask the next guy they were interested in if he was a function or non-function. They decided this was problematic, though, because he wouldn’t know what they were talking about if he hadn’t taken Algebra 2.

Campaigns for “Literacy / Numeracy Across The Curriculum” always seem to wind up a joyless exercise in box-checking for teachers outside those disciplines, but Bruce Ferrington’s school approached schoolwide numeracy with some whimsy:

The boss has decided that teachers are going to wear a number around their necks. No, we are not all convicts doing time. It’s a cunning plan to get the kids to look at numbers in new ways. The whole idea is that the students are not allowed to use the names of the teachers. They need to call them by a number combination or calculation that equals their number.

We decided that if we wanted kids to talk, they needed to have something rich and complex to talk about and make sense of. After brainstorming some different options, we turned the computational question into a conceptual one.