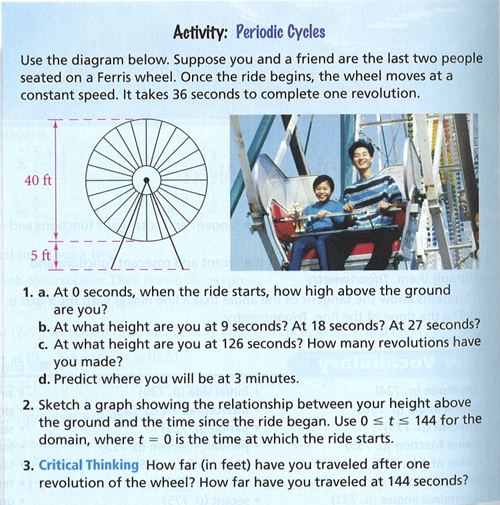 Pass out these empty graphs [pdf]. Ask students to graph the height of the red cart above the ground as best as they can for two complete spins. We aren’t asking for exactness yet. We’re looking to see:

Do they create smooth maxima and minima or pointy, non-differentiable cusps? If they’re making cusps, they’re suggesting the cart bounces at the top of the ferris wheel. 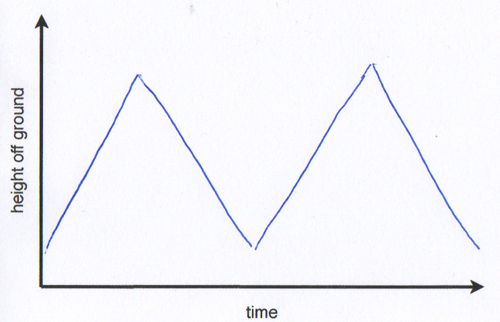 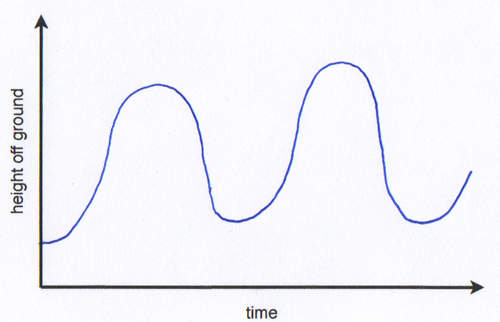 Is the horizontal distance between maxima the same? If they’re different, your students are suggesting the cart isn’t moving at a constant rate, that it speeds up or slows down during the ride. 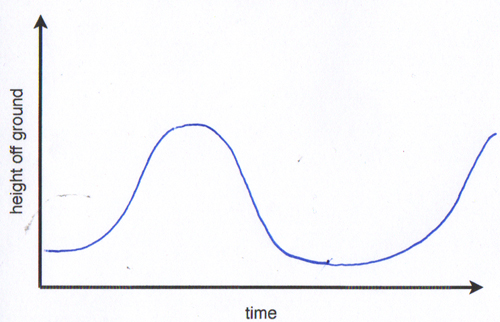 Are their minima a few feet above ground level? Or are they suggesting the red cart hits the ground at the bottom of each turn? 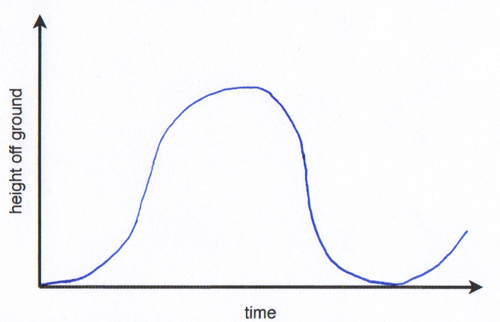 In every case, push your students to attend to precision. (Common Core achievement unlocked!) Give them more of these graphs or have them hit erase on the tablet and start again. Get it right. Be precise.

Now that we’re pretty clear on the structure of this new kind of function called “periodic,” let’s step our game up. Ask them to guess how many full turns the red car will take before its ride is over. Tell them their other goal is to figure out exactly how high off the ground the cart will be at the end of three minutes. (Real-world relevance achievement … still pretty much locked.)

Now we’re ready to start the task as written. Use this screenshot with information. Head to Desmos, kids. Punch in points that are more obvious to you. The minima. The maxima. The position at far left and far right. Keep that going. 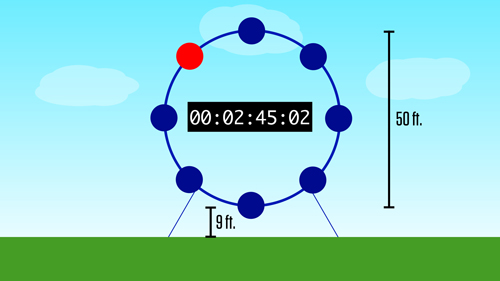 Students need to see that their old models are useless to describe these points. So give them a new one. Out with y=mx+b. In with y=asinb(x+c)+d.

Have them mess with the parameters until they get a perfect fit. Then use it to find the position at 3:00.

Now show them whether or not the model actually works.

For an extension, perhaps ask:

Previously. The preview post where you’ll find some other interesting ideas.

Happy August. There are four #MakeoverMondays left and I’ll be posting their previews on the previous Thursday. What would you do with this introductory task from a unit on periodics and why?

This is from Pearson’s Algebra 1 textbook for iPad.

Tom Ward has me covered on the first point. Nothing’s topping this aspirational save-the-date for his 2019 marriage to Ms. Stone. What will postage cost then? 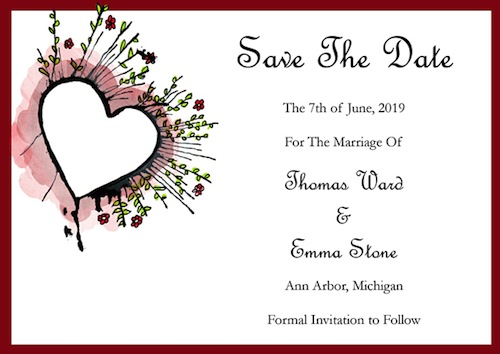 Graphs and equations of data are useful when they let us predict something external to the data we know. We don’t know the price of postage stamps in 2019 so we can extend a linear model beyond the data and find out what it might be. 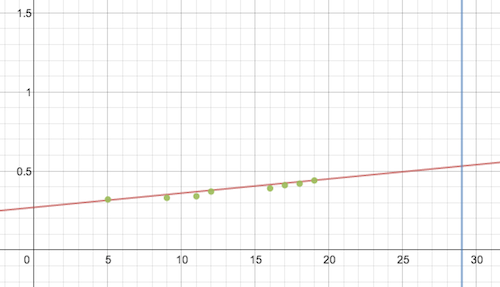 Mr. Ward will need to scrounge up 54 cents per invitation.

But he still hasn’t given us a reason to care about the step graph. For that we look at internal data. We tell the kid, “Hey, your graph is messed up. If you hand that graph to someone, it says the cost of postage in 2003 was 39 cents and the cost in 2005 was 41 cents. But the cost in both those years was only 37 cents.” 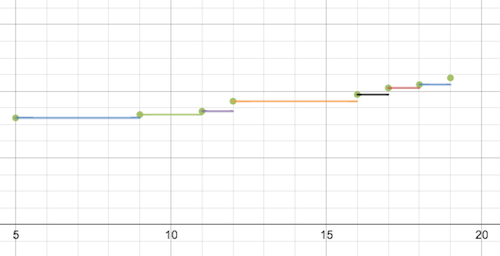 Aside from Tom Ward’s superb work, over on the blogs:

@ddmeyer Get rid of text. Change table to pics of stamps with the years labeled. Ask to predict $ a letter costs this year and in 2020

@ddmeyer investigate a longer time line and a line of best fit to determine future increases. Discuss "vertical distances" to each point.

So show this picture of a wreck. Ask your students to guess how fast you think that car was going when it hit the brakes. Tell them they have to figure out if it broke the law. Do they think it was speeding? 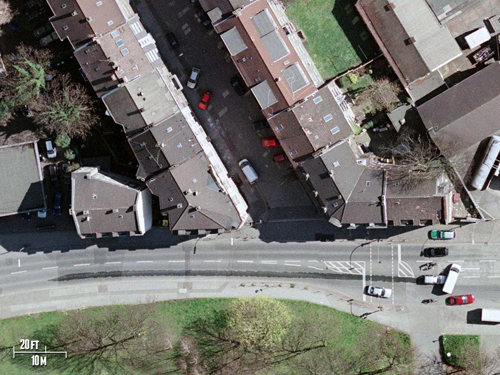 Then show them this image. 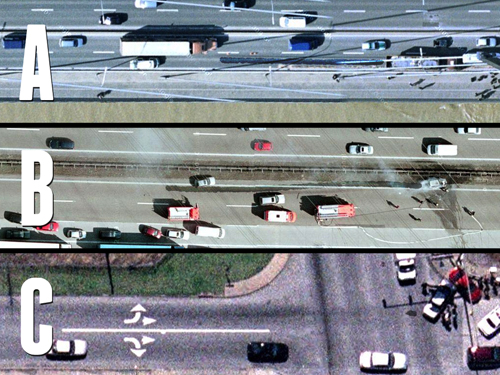 Ask your students to rank the cars from fastest to slowest. Ask them how they know. They’ve decided the variables “length of skid” and “speed” are positively related. But what kind of relationship is it? This is where a graph — a picture of a relationship — is so useful. Show them the data. 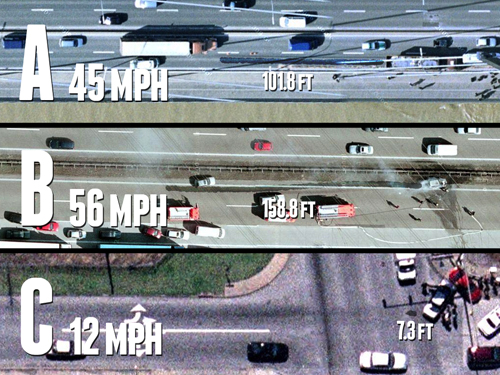 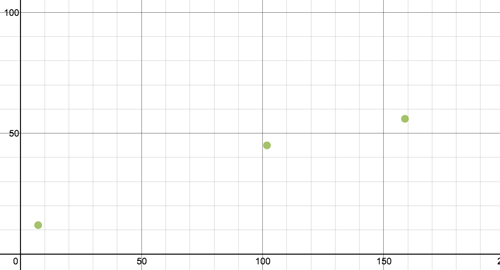 Now they can find the exact model for these data and evaluate it for 232.7 feet. 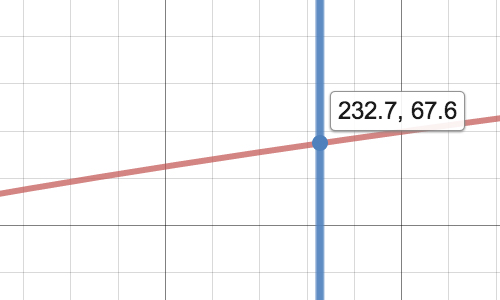 68 miles per hour in a residential zone? You won’t be needing that drivers license for a long time.

Now this is the reason I follow this blog. I am a criminal justice instructor and many students come to my field as fugitives from math and science. Use of these materials is helping me develop criminal justice contextualized math resources for a class proposal.

This is from Discovering Geometry.

Basically, I three-acted the heck out of it. Which means:

Here’s the three-act page. Leave a response to see the entire lesson.

Show this video to students.

Ask them to write down a guess: will the sauce overflow? Ask them to guess how many meatballs it’ll take. Guess guess guess. It’s the cheapest, easiest thing I can do to get students interested in an answer and also bring them into the world of the task.

Ask them what information would be useful to know and how they would get it. Have them chat in groups about what’s important.

Give them the information you have. 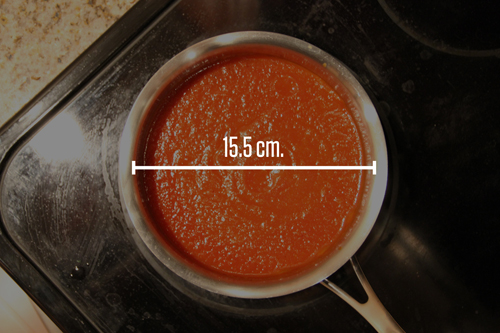 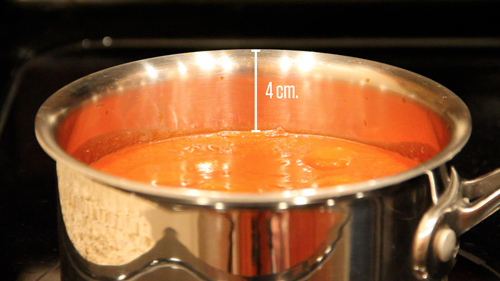 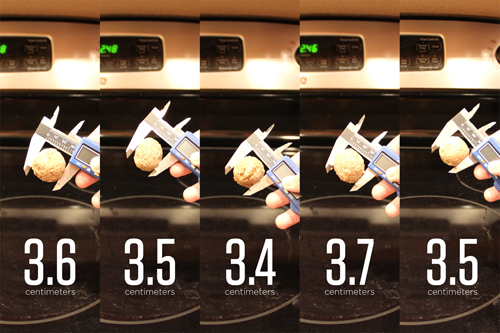 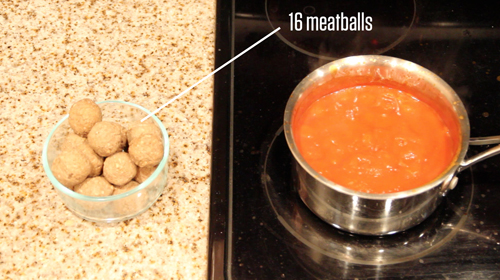 Let them struggle with it enough to realize what kind of help they’ll need. Then help them with the formula for cylinder and sphere volume. Do some worked examples.

Once they have their mathematical answer, have them recontextualize it. What are the units? If that lip matters, how many meatballs will it matter? Should you adjust your answer up or down?

Then show them the answer.

Surprisingly close. The student who decided to add a couple of meatballs to her total on account of that lip is now looking really sharp.

Let’s not assume students are now fluent with these volume operations. Give them a pile of practice tasks next. Your textbook probably has a large set of them already written.

If you have a textbook task you’d like us to consider, you can feel free to e-mail it. Include the name of the textbook it came from. Or, if you have a blog, post your own makeover and send me a link. I’ll feature it in my own weekly installment. I’m at dan@mrmeyer.com

2013 Jul 16. A makeover from Chris Hunter in the comments. (I had forgotten how weird Orbeez look in water.)

We just talked about this problem and your makeover at Math for America. One idea was to up the stakes: I’m putting this jar of water on top of a student’s phone. How many balls can I put it before it spills over? If you are sure you are right, put your phone under the jar…