Lately, I’ve been interested in the math teaching opportunities that arise when we delete and then progressively reveal details of a task. Digital media offers us that luxury while paper denies it.

I saw an opportunity to apply the same approach in history and geography. I took the license plates from all fifty United States and removed explicit references to the state or its outline. Then Evan Weinberg turned it into an online quiz.

Feel free to send your students to that quiz, or to use the images themselves [full, deleted, animated] in any way you want. If you’re feeling obliging, stop by and let us know how it went in the comments.

If I Taught: Social Studies

I’d have my students reverse engineer banknotes and license plates:

I’d rip ’em from Banknotes or Plateshack or wherever. And then I’d get comfortable with Photoshop’s clone stamp, removing identifying details by any means necessary.

And then I’d serve them up plain … 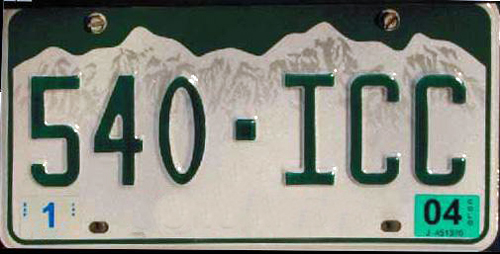 … and ask the students to:

You are unexpectedly transported to England in the year 1000 AD with what you are wearing, what you know, and nothing else. What challenges do you face? Specifically, how do you survive?

Such a fine summative question there, visceral, compelling, offering a gradient of responses all the way from “I wouldn’t.” to some of the comments at Marginal Revolution, demonstrating extraordinary command of local geography, sociology, and economy.

And after dozens of serious vectors on the question, this gem:

Only what you are wearing and what you know? Well, I’m wearing a fully-comped Springfield DA in a shoulder rig, counterbalanced with three extra mags. I’ve got a Spyderco Police Model in the back pocket of my jeans, a pretty extensive magpie board in my wallet, and I know how to make grain explode. So, me, I’m headed straight for my new castle, comprende?

We’re talking a four-minute blend of motion graphics and archival footage so fine it’s tough to tell where one ends and the other begins. The mad geniuses at PIC Agency tossed ’em both in a blender, hit purée, and the result is an even-handed, sober narration of Saudi Arabia’s entire existence.

As a kid born after the embargo, I never understood until now just how their interests and ours have competed on their soil and, as of 9/11/01, on ours like some fatal game of football. “A violent collision of tradition and modernity,” as the narration puts it.

And they’re online. And in high-def. If you teach history, I’d sock this one away for the appropriate unit.

So clearly the visuals here supplement the narration in a sum-greater-than-the-parts kinda way. This wouldn’t have been nearly the accomplishment with just visuals or just text.

But I think the success of this piece and others like it leads some teachers to the wrong conclusion, that multimedia is the magic element here. The mistake is to assume that using video clips or pictures or sound or some combination thereof or even some student buffet selection thereof is gonna improve learning.

What no one teaches teachers to do, what teachers only teach themselves if they’re of the mind, is how to edit their material into stories, how to set-up antagonists and position their students as protagonists, how to modulate their voices, letting them bend a little with the direction of the stories, how to use volume like a scalpel, letting it drop a little before a conclusion and pick up as they move along, how to generate kinesthetic energy by moving around the classroom when the lesson’s pace slackens, when to signal that something big is coming up and when to let it kinda drop on them and settle on different students at different times.

Or how to do that in multimedia, surround sound stereo.

More than the media matters is the quality of the media. The edubloc is taking up the cause of multimedia but how many bloggers realize that their responsibility doesn’t end with putting a camera in a kid’s hands or a microphone in front of her face.

How many of them realize that there’s a right way to teach this stuff, or that their multimedia fixation is making video / audio / photo production teachers out of them all?