Amare is looking at these 16 parabolas. Her partner Geoff has chosen one and she has to figure out which one by asking yes-or-no questions. 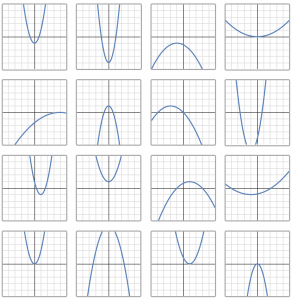 There are lots of details here. She’s trying to focus on the ones that matter. The color of the parabola doesn’t seem relevant. They’re all blue. The window of the graph is the same for all the parabolas.

She focuses on the orientation of the graphs and she asks a question using the most precise words she can given her current understanding. “Is it like a hill?” she asks.

Geoff answers back “No” and Amare eliminates all the “hill” graphs from consideration. So far so good. 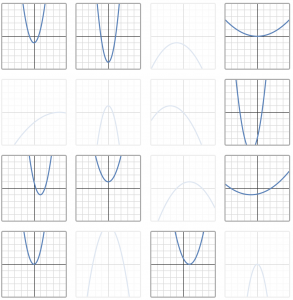 Amare is now at a loss. She knows that the graphs are different but she isn’t sure how to articulate those differences. “Is it wide?” she asks.

After a long pause, Geoff answers back “Yes.”

Amare eliminates several graphs, one of which happens to be Geoff’s graph. Their definitions of “wide” were different.

Their teacher brings the class together for a discussion of the features the students found useful in their exchanges. The teacher offers them some language mathematicians often use to describe the same graphs. Then they all return to the activity to play another round.

Here is a diagram the GAIMME report uses to describe mathematical modeling (p. 13): 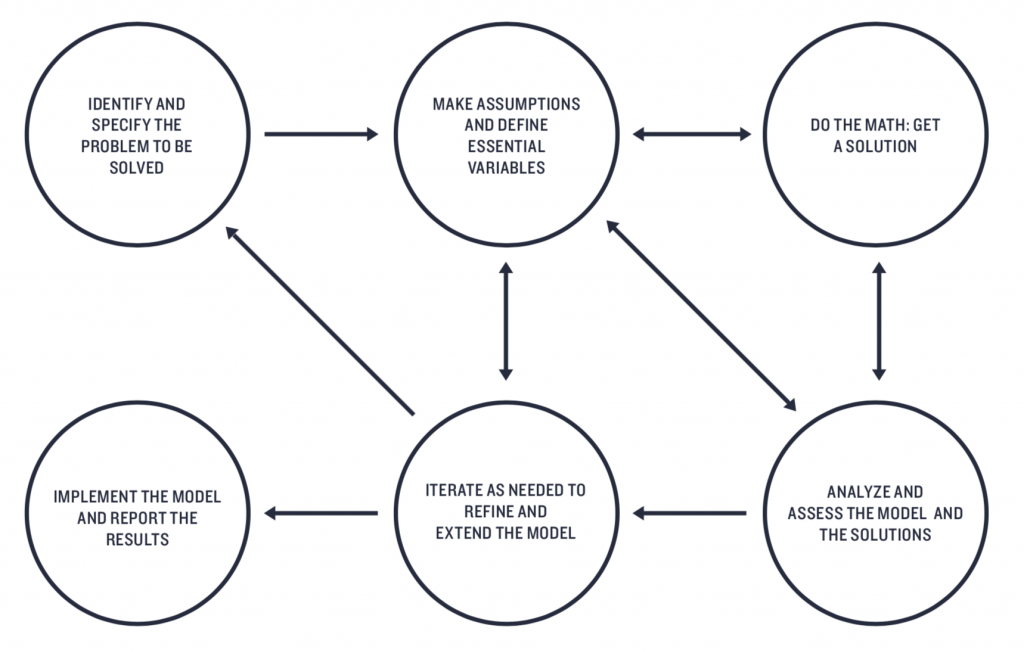 I contend that Amare and Geoff participated in every one of those stages.

Mathematical modeling is a process that uses mathematics to represent, analyze, make predictions or otherwise provide insight into real-world phenomena.

I contend that Amare and Geoff satisfy that definition as well.

Many mathematical modelers would disagree, I suspect, given the reaction to my panel remarks last week.

Polygraph isn’t “real world.” They’re convinced it isn’t. When asked to describe how we know a student is working in the “real world” or not, though, they beg the question with adjectives like “legitimate,” authentic,” or “not mathematical” (essentially “not not ‘real world'”).

They can’t offer a definition of “real world” that categorizes the shapes that are right in front of the student right now as “not real.” They just know “real world” when they see it.

The distinction between the “real” and “not real” world doesn’t exist and insisting on it makes everyone’s job harder.

It makes the mathematical modeler’s job harder. The tasks mathematical modelers enjoy are not categorically different from Polygraph. The early ideas that teachers need to elicit, provoke, and develop in those tasks differ from Polygraph only in their degree of contextual complexity. Instead of telling teachers, “Here is how this task is similar to everything else you’ve done this year,” and benefiting from pedagogical coherence, they tell teachers, “This task is categorically different from everything else you’ve done this year and why aren’t you doing more of them?”

I’m trying to convince mathematical modelers that their process is the same one by which anyone learns anything, that they should spend much less time patrolling borders that don’t exist, and instead apply their processes to every area of the world, every last bit of which is “real.”

Don’t Teach Math the “Smart Way”   All Learning Is Modeling: My Five-Minute Talk at #CIME2019 That Made Things Weird
Unless otherwise noted, everything you and I post here is licensed
for reuse under Creative Commons Attribution 4.0 International.