“Surprising” probably isn’t in the top ten list of adjectives students would use to describe math class, which is too bad since surprise lends itself to learning.

In short, when we’re surprised we’re ready to learn.

We can design for surprise too, increasing the likelihood students experience that readiness for learning. But the Intermediate Value Theorem does not, at first glance, look like a likely site for mathematical surprise. I mean read it:

[I slam several nails through the door and the floor so you’re stuck here with me for a second.]

Nitsa Movshovits-Hadar argues in a fantastic essay that “every mathematics theorem is surprising.” She continues, “If the claim stated in the theorem were trivial it would be of no interest to establish it.”

What surprised Cauchy so much that he figured he should take a minute to write the Intermediate Value Theorem down? How can we excavate that moment of surprise from the antiseptic language of the theorem? Check out our activity and watch how it takes that formal mathematical language and converts it to a moment of surprise. 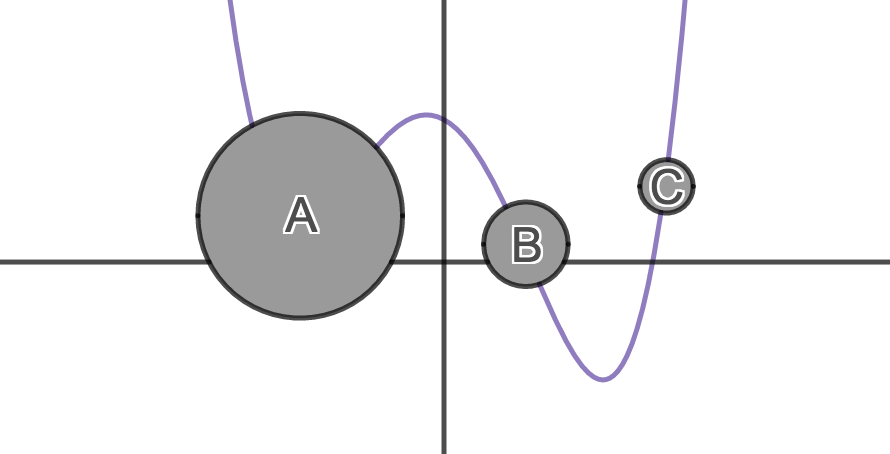 They formulate and defend their conjectures and then we invite them to inspect the graph.

In the next round, we throw them their first surprise: functions are fickle. Do not trust them.

And then finally we throw them the surprise that led Cauchy to establish the theorem:

But you can’t expect me to spoil it. Check it out, and then let us know in the comments how you’ve integrated surprise into your own classrooms.

Sometimes you check just a few examples and decide something is always true. But sometimes even 9.8 Ã— 10â´Â² examples is not enough!!!@gregeganSF and I came up with this shocker here on Twitter. To see what's really going on, visit my blog:https://t.co/Yw0S0Iyyx9 pic.twitter.com/1FThY9skeZ

Remainders   Rough-Draft Talk in Front of Hundreds of Math Teachers
Unless otherwise noted, everything you and I post here is licensed
for reuse under Creative Commons Attribution 4.0 International.