The Desmos Teaching Faculty Is Hiring!

My team at Desmos is hiring!

Why you should apply is really simple:

Desmos is the best place to do great work in math edtech right now and for the foreseeable future.

Here are six reasons I’m pulling out of muscle memory. I’m not even thinking about them. Ask me in ten minutes and I’ll give you six more just as fast.

We’ve spent several years tuning up our model for math, education, and technology. We studied it over the last three months and various aspects have clicked right into place. Demand is heating up for that work so we’re looking for people to help us build.

So please check out the posting and think about applying or sending it to someone you know.

BTW. If the formatting of the job posting seems atypical, it’s because we spent a lot of time discussing Lever’s blog series on reducing hiring bias. It would be easy to write a list of required credentials based on our mental profile of an ideal candidate. But that mental profile would be extremely susceptible to implicit and explicit biases. Lever received more responses from a more diverse group of candidates when they focused less on their credentials and more on what they’d need to know for the work and what they’d do at different milestones in their first year.

For example, an earlier draft of our posting required “at least five years of teaching experience at grades 6-12,” which isn’t bad as far as credentials go, but we realized it’s really just a proxy for the first four bullets beneath “What you should show up ready to teach anyone on your first day.”

We’re grateful to Lever for opening up their hiring practices to the public.

Two New Interviews with Yours Truly

I have two interviews out right now that I want to bring to your attention – a PDF and a podcast, so pick your medium! Both sets of interviewers were fantastic – well-researched and probing — and I did my best to rise to the occasion.

First, Ilona Vashchyshyn interviewed me for the May / June issue of Saskatchewan Mathematics Teachers’ Society magazine [pdf]. Ilona read my dissertation and her questions drew together themes of online math edtech, mathematical modeling, and Math Teacher Twitter. Here’s me:

The consistent theme in my participation [in online math teaching communities] is the fact that my thoughts always seem perfect to me until they escape the vacuum seal of my brain. Once they’re out in the world, in a blog post or a tweet, that’s when I realize how much work they need. I can’t get that feeling any other way.

Second, I have an hour-long interview out today with Becky Peters and Ben Kalb of the Vrain Waves podcast. They dug deep into my blog’s back catalog and asked questions about decade-old posts I had forgotten about. Halfway through, they asked about the role of memorization in learning mathematics. I confessed to them that I never want to be stuck driving on the road at the same time as anybody who derides the value of memorization in learning mathematics. I know a bunch of you will disagree with me there, so listen to the piece, and then tell me what you think either here or on Twitter. 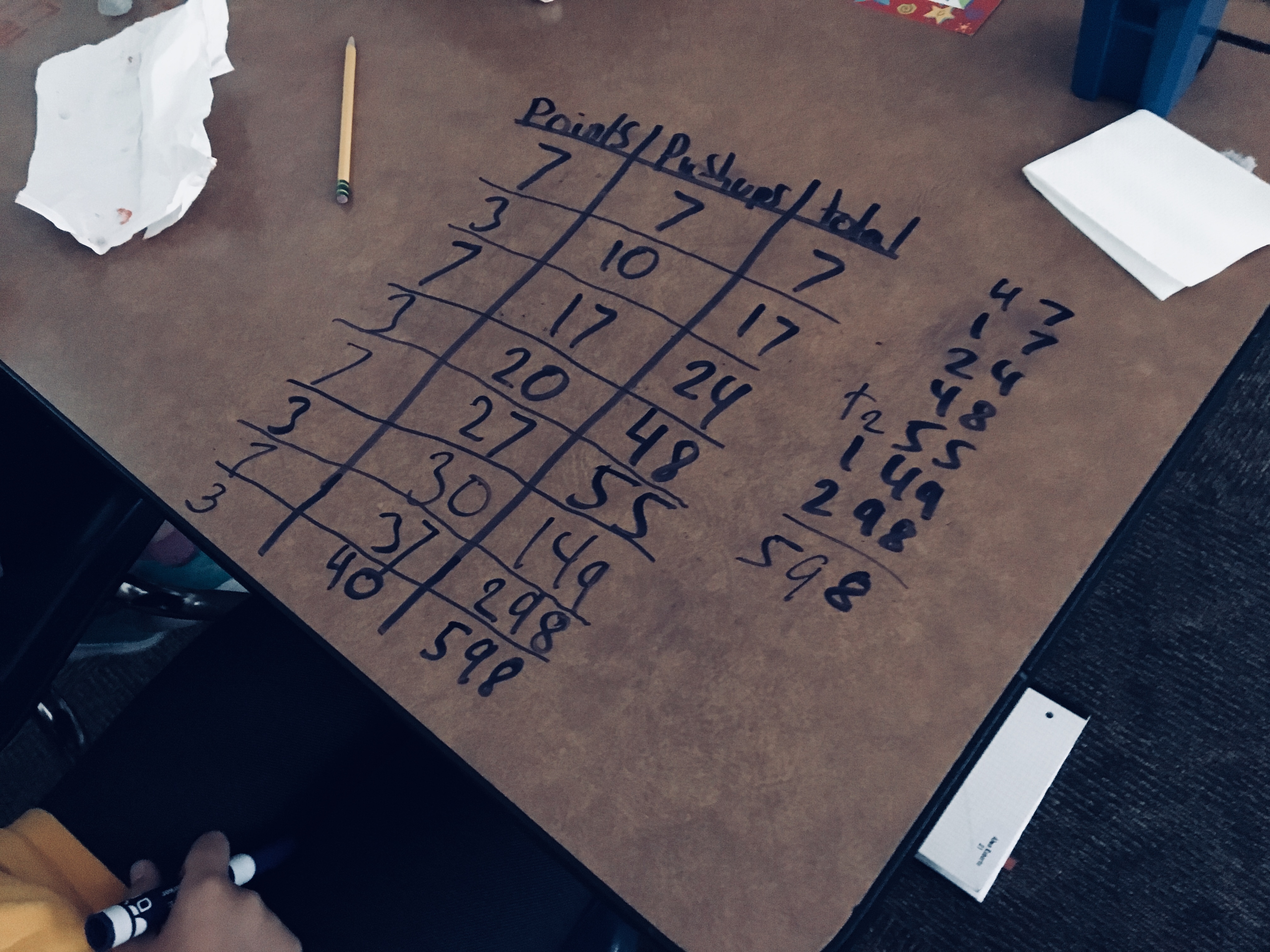 Many thanks to Ben Spencer and his fifth-grade students at Beach Elementary for letting me learn with them on Friday.

In most of my classroom visits lately, I am trying to identify moments where the class and I are drafting our thinking, where we aren’t looking to reach an answer but to grow more sophisticated and more precise in our thinking. Your classmates are an asset rather than an impediment to you in those moments because the questions they ask you and the observations they make about your work can elevate your thinking into its next draft. (Amanda Jansen’s descriptions of Rough-Draft Thinking are extremely helpful here.)

A productive task certainly helps though. So today, we worked with Bucky the Badger, a task I’d never taught with students before.

We learned that Bucky the Badger has to do push-ups every time his football team scores. His push-ups are always the same as the number of points on the board after the score. That’s unfortunate because push-ups are the worst and we should hope to do fewer of them rather than more. 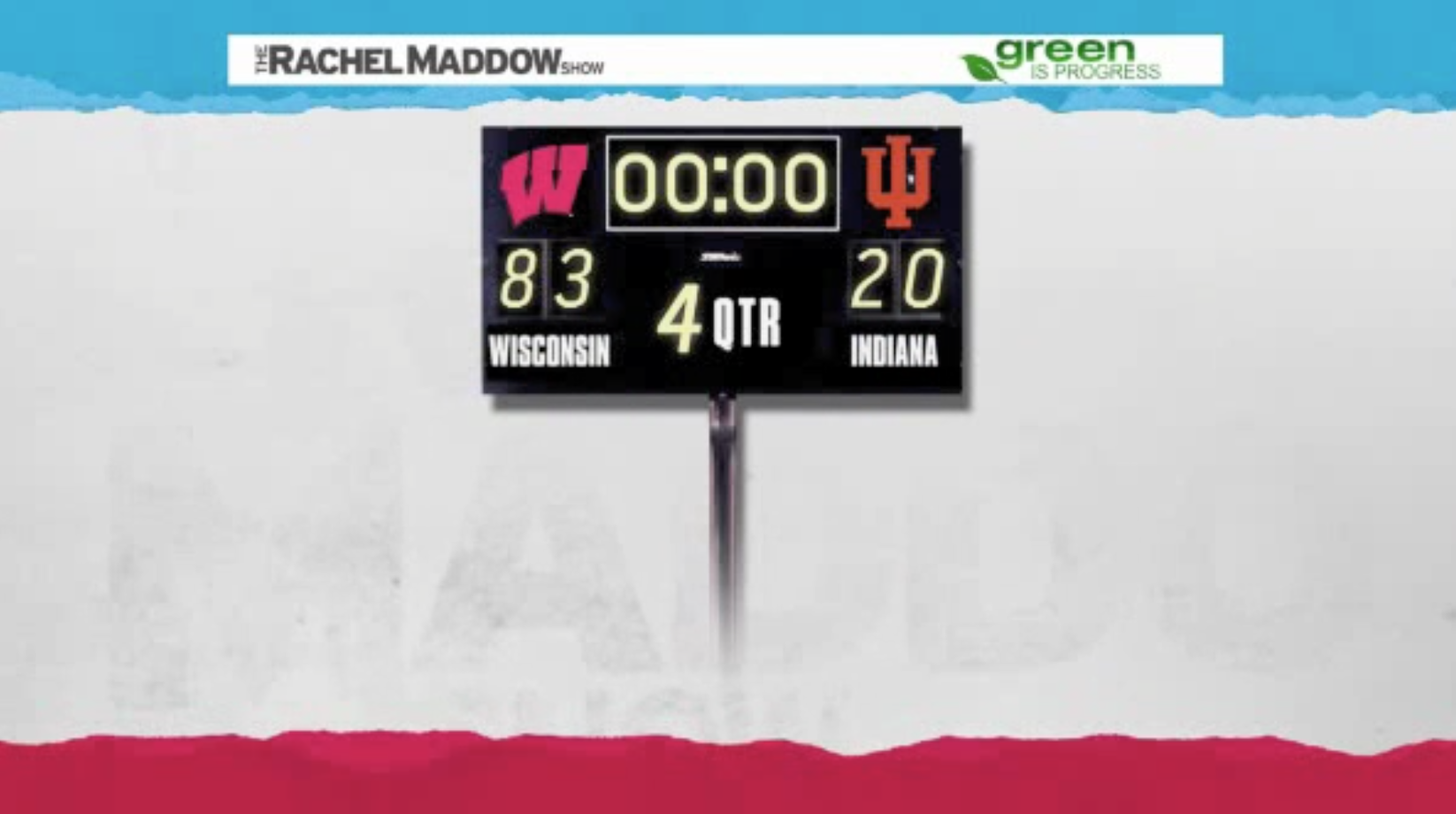 I asked students to predict how many push-ups Bucky had to perform in total. Some students decided he performed 83, the total score of Bucky’s team at the end of the game. Several other students were mortified at that suggestion. It conflicted intensely with their own understanding of the situation.

I wanted to ask a question here that was interpretive rather than evaluative in order to help us draft our understanding. So I asked, “What would need to be true about Bucky’s world if he performed 83 push-ups in total?” The conversation that followed helped different students draft and redraft their understanding of the context.

They knew from the video that the final score was 83-20. I told them, “If you have everything you need to know about the situation, get to work, otherwise call me over and let me know what you need.”

I told the students that if the answer to either question was “yes,” that I could definitely get them that information. But I am very lazy, I said, and would very much rather not. So I asked them to help me understand why they needed it.

Do not misunderstand what we’re up to here. The point of the Bucky Badger activity is not calculating the number of push-ups Bucky performed, rather it’s devising experiments to test our hypotheses for both of those two questions above, drafting and re-drafting our understanding of the relationship between points and push-ups. Those two questions both seemed to emerge by chance during the activity, but they contain the activity’s entire point and were planned for in advance.

To test whether or not the kind of scores mattered, we found the total push-ups for a score of 21 points made up of seven 3-point scores versus three 7-point scores. The push-ups were different, so the kind of scores mattered! I acted disappointed here and made a big show of rummaging through my backpack for that information. (For the sake of this lesson, I am still very lazy.) I told them Bucky’s 83 points were composed of 11 touchdowns and 2 field goals.

Again, I said, “If you have everything you need to know about the situation to figure out how many push-ups Bucky did in the game, get on it, otherwise call me over and let me know what you need.” The matter was still not settled for many students.

I passed out the listing of the kinds of scores in order and students worked on the least interesting part of the problem: turning given numbers into another number.

I looked at the clock and realized we were quickly running out of time. We discussed final answers. I asked students what they had learned about mathematics today. That’s when a student volunteered this comment, which has etched itself permanently in my brain:

A problem can change while we’re figuring it out. Our ideas changed and they changed the question we were asking.

Many math problems don’t change while we’re figuring them out. The goal of their authors, though maybe not stated explicitly, is to prevent the problem from changing. The problem establishes all of its constraints, all of its given information, comprehensively and in advance. It tries to account for all possible interpretations, doing its best not to allow any room for any misinterpretation.

But that room for interpretation is exactly the room students need to ask each other questions, make conjectures, and generate hypotheses — actions that will help them create the next draft of their understanding about mathematics.

We need more tasks that include that room, more teacher moves that help students step into it, and more teacher beliefs that prepare us to learn from whatever students do there.

2018 May 23. Amanda Jansen contributes to the category of “productive teacher beliefs”:

Doing mathematics is more than answer-getting.

Everyone’s mathematical thinking can constantly evolve and shift. Continually. There is no end to this.

Everyone’s current mathematical thinking has value and can be built upon.

An important role of teachers is to interpret students’ thinking before evaluating it. Holding off on evaluating and instead engaging in negotiating meaning with students supports their learning. And teacher’s learning.

Everyone learns in the classroom. Teachers are learning about students’ thinking and their thinking about mathematics evolves as they make sense of kids’ thinking.

The list goes on, but I’m reflecting on some of the beliefs that are underlying the ideas in this post.

2018 May 26. Sarah Kingston is a math coach who was in the room for the lesson. She adds teacher moves as well.

My talk from the annual convention of the National Council of Teachers of Mathematics last week was called “Why Good Activities Go Bad.” I hope a) you’ll have a look, b) you’ll forgive my voice, which as it happens I left at the Desmos Happy Hour the night before.

The talk is a deep dive on a single activity: Barbie Bungee.

But the goal of the talk isn’t that participants would walk away having experienced Barbie Bungee or that they’d use Barbie Bungee in their own classes later. Phil Daro has said that the point of solving math problems isn’t to get answers but to understand math. In the same way, the point of discussing math tasks with teachers isn’t to get more tasks but to understand teaching.

So during the first few minutes, I give a summary of the task relying exclusively on your tweets for photo and video documentation. Then I interview three skilled educators on their use of the task —Â Julie Reulbach, Fawn Nguyen, and John Golden. Two teachers saw students engaged and productive, while the third saw students bored and learning little.

What accounts for the difference?

My talk makes some claims about why good activities go bad.

Here are the previous five addresses I have given at the NCTM Annual Convention.

2017: Math is Power, Not Punishment
2016: Beyond Relevance & Real World: Stronger Strategies for Student Engagement
2015: Fake-World Math: When Mathematical Modeling Goes Wrong and How to Get it Right
2014: Video Games & Making Math More Like Things Students Like
2013: Why Students Hate Word Problems