We were solving linear equations in Ms. Warburton’s eighth grade class last week and I learned (or re-learned, or learned at greater depth) a couple of truths about mathematics.

As I approached B and R, I misread them as disengaged. In fact, they were thinking really, really hard about this beast:

B suggested they multiply by two as a “fraction buster.”

(One small pleasure of guest teaching is trying to identify and decode the vernacular of each new class. I heard “fraction buster” more than once.)

R asked, “But do we multiply this by two or the whole thing by two?” 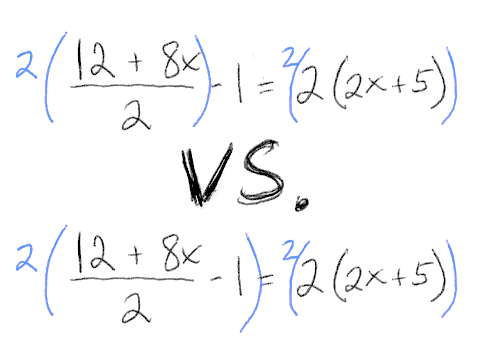 If you’ve taught math for a single day, you know the choice here.

You can tell them, “You multiply the whole thing by two.” That’d be helpful by the definition of “helpful” that includes “completing as many math problems as correctly and quickly as possible.” But in terms of classroom management, I’ll be doing myself no favors, having trained B and R to call me over whenever they have any similar questions. More importantly, I’ll have done their relationship with mathematics no favors either, having trained them to think of math as something that can’t be made sense of without an adult around.

“Variables like x and y behave just like numbers like -2 and 3.” I said. I wrote this down and said, “Try out both of your ideas on this version and see what happens.”

After some quick arithmetic, they experienced a moment of clarity.

In the next class, students were helping me solve 2x – 14 = 4 – 2x at the board. M told me to add 2x to both sides. One advantage of my recent sabbatical from classroom teaching is that I am more empathetic towards students who don’t understand what we’re doing here and who think adding 2x to both sides is some kind of magical incantation that only weird or privileged kids understand.

So at the board I was asking myself, “Why are we adding 2x to both sides? What if we added a different thing?”

Then I asked the students, “What would happen if we added 5x to both sides? What would break?” 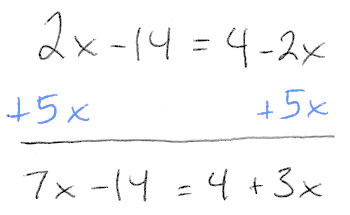 Nothing. We decided that nothing would break if we added 5x to both sides. It wouldn’t be as helpful as adding 2x, but math isn’t fragile. You can’t break math.

Here is an awesome sequence of comments in which people savage the term “cancel,” then temper themselves a bit, and then realize that their replacement terms are similarly limited:

I have a huge problem with ‘cancel.’ It’s mathematical slang, and I’m OK with its use among people who really understand the mathematics. But among learners it obscures the mathematics and leads to things like “cancelling terms” in rational expressions.

I think the word “cancel” is misused in math when teaching students. We are not canceling anything we are making ones and zeros.

I never say cancel. I’ve worked hard to eliminate it from any teaching I do. Same with cross multiply, never say it. Instead I say “add to make zero” or “divide by or multiply by the reciprocal of to make one”.

We use “cancel” to mean too many things and so they use the term anytime they want to get rid of something or slash something out. The basis for my concern: when I ask kids “why can you do that?” they often can’t explain.

However, when it comes to squaring a square root, what is most accurate to say? I don’t correct the kids in that case, and I tell them that cancel means the same thing as “undo”.

If the point is to be rigorous, “apply the inverse” is more rigorous and technical than “cancel”.

In the topic of “get x by itself”, I’ve started saying “We want to say what x is. What would that look like?” They usually say “It would look like x = something”. Then they’ve chosen what the final equation ought to look like for themselves.

I wonder what would happen if we had an equation and then asked them to find out what, say, 2x+1 was.

Even in my Advanced Algebra 2 classes I have started using the phrases “legal” and “useful”. In the original post adding 5x to both sides was definitely “legal” just not as “useful”.

One of my refrains is that an algebraic step is “correct, but not useful.” Inspired by my dance teacher, I also talk about how a particular procedure is lovely, just not in today’s choreography (which is geared towards solving for an unknown/simplifying a trig expression/ finding intercepts, etc).

[Desmos Design] Algebra Is Power, Not Punishment   [Pseudocontext Saturdays] Exoskeleton
Unless otherwise noted, everything you and I post here is licensed
for reuse under Creative Commons Attribution 4.0 International.