Every Handout from NCTM 2017

I’d been using the same script for this task for the last two years, but NCTM switched website vendors this year and I had to create a new one. On the one hand, accessing handouts from the conference probably shouldn’t be so challenging. On the other, this process is such a fun puzzle for me, and maps almost perfectly onto the process of mathematical modeling.

Here is what I mean. The third step in the modeling cycle is to “perform operations.” I’m not here to tell you that people (old or young) should never perform operations, just that computers are generally much faster at it. When I thought about the task of poking my head into all 740 NCTM session websites and asking, “Hello. Any handouts in here?” I admitted defeat immediately to some software.

So the human’s job is the first two steps: identifying essential variables and describing the relationships between them. Computers are much, much worse at this than humans. That meant looking at cryptic computer chicken-scratch like this and asking, “What do I need to tell the computer so it knows where to look for the session handouts? 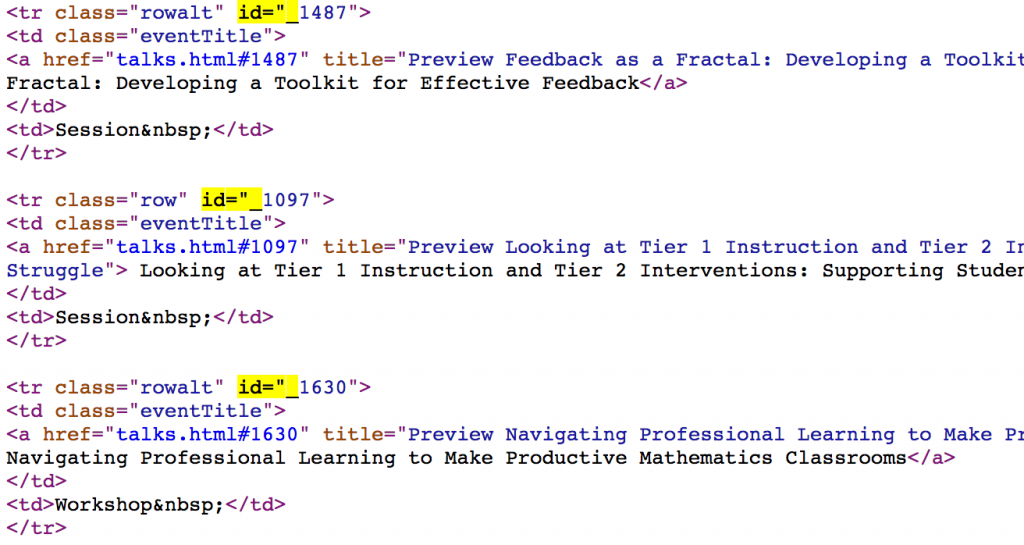 If you notice that each session has its own four-digit “id” and that each handout has been tagged with “viewDocument,” you can tell the fast machine where to look.

But the modeling cycle doesn’t end there. Just like you shouldn’t paste the results from your calculator to your answer sheet without thinking about it, you shouldn’t paste the results of the fast machine’s search to your blog without thinking about it. You have to “validate the results,” which in my case meant poking around in different sessions, making sure I hadn’t missed anything, and then revising steps one and two when I realized I had.

I hope NCTM will make these easier to find.

Is there no way to see who actually posted them online without clicking on each speaker? (like NCSM)

These handouts are basically advertisements for the conference without substituting for attendance. (No prospective attendee will say, “I was this close to attending but then I found out some of the handouts would be online.”) If they’re easier to find, not only will existing attendees be happier but non-attendees will have a nice preview of the intellectual activity they can expect at the conferences, making them more inclined to attend the next year. Nothing but upside!

RIP Malcolm Swan   Presentation Advice from 14 of My Favorite Presenters
Unless otherwise noted, everything you and I post here is licensed
for reuse under Creative Commons Attribution 4.0 International.