1,000 Math Teachers Tell Me What They Think About Calculators in the Classroom

I wanted to know if they allow calculators a) during classwork, b) during tests, and also which kinds of calculators:

(Full disclosure: I work for a company that distributes a free four function, scientific, and graphing calculator for mobile phones and other devices.)

I asked the question because hardware calculators don’t make a lot of financial sense to me.

Here are some statistics for high-end HP and Texas Instruments graphing calculators along with a low-end Android mobile phone. (Email readers may need to click through to see the statistics.)

You pay less than 2x more for the mobile phone and you get hardware that is between 30x and 300x more powerful than the hardware calculators. And the mobile phone sends text messages, takes photos, and accesses webpages. In many cases, the student already has a mobile phone. So why spend the money on a second device that is much less powerful? 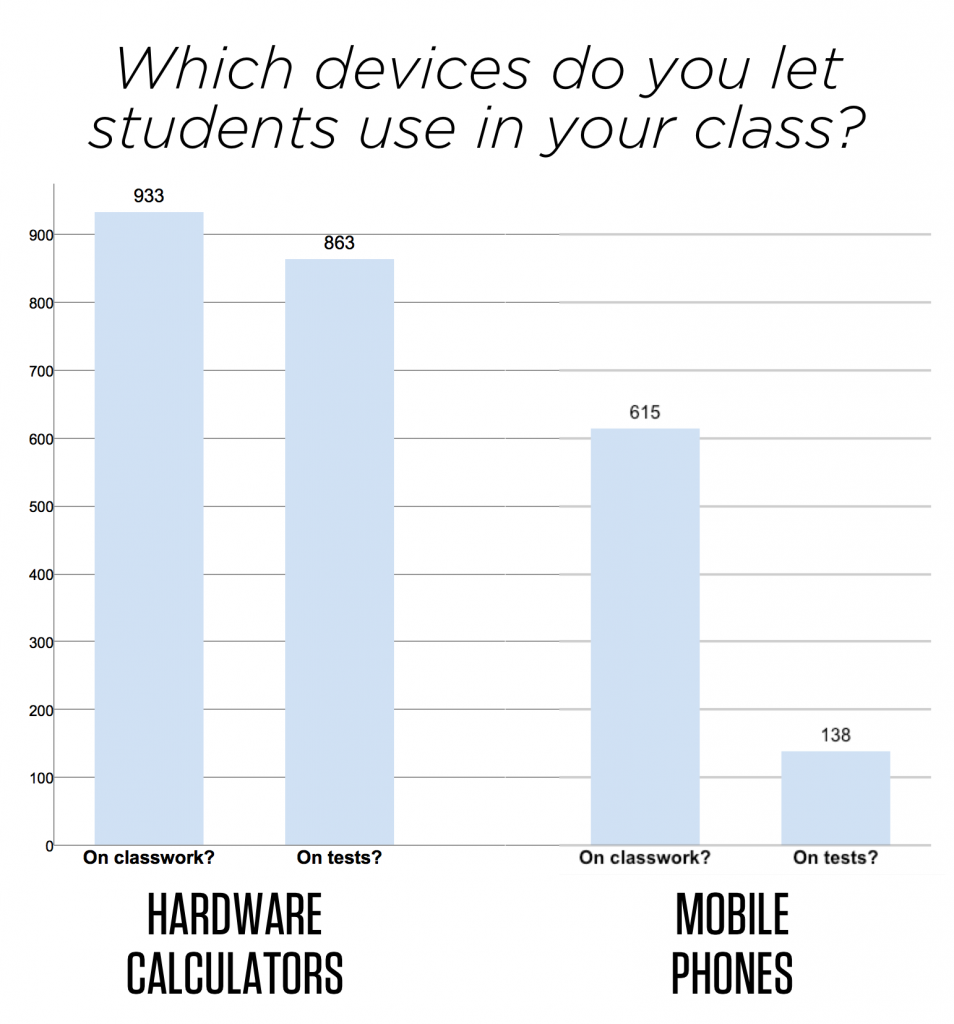 The vast majority of respondents allow hardware calculator use in their classes. I suspect I’m oversampling for calculator-friendly teachers here, by virtue of drawing that sample from a digital medium like Twitter.

Here are their reasons, along with representative quotes, ranked from most common to least. 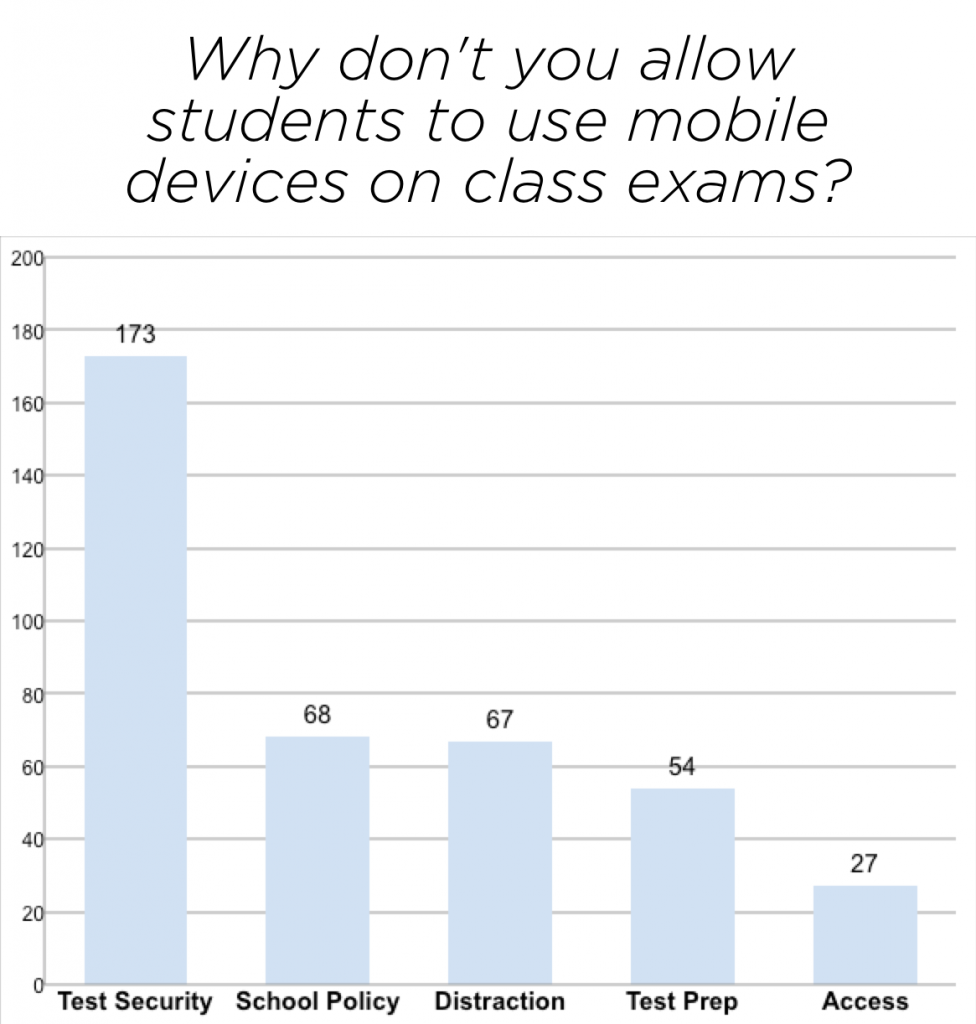 It’s too easy for students to share answers via text or picture.

Internet access capabilities and cellular capabilities that make it way too easy for the device to turn from an analysis/insight tool to the CheatEnable 3000 model.

It’s against school policy. They can use them at home and I don’t have a problem with it, but I’m not allowed to let them use mobile devices in class.

Students waste time changing music while working problems, causing both mistakes due to lack of attention and inefficiency due to electronic distractions.

We believe the distraction factor is a negative impact on learning. (See Simon Sinek’s view of cell phones as an “addiction to distraction.”)

I am also preparing my students for an IB exam at the end of their senior year and there is a specific list of approved calculators. (Phones and computers are banned.)

Basically I am trying to get students comfortable with assessments using the hardware so they won’t freak out on our state test.

Our bandwidth is sometimes not enough for my entire class (and others’ classes) to be online all at once.

I haven’t determined a good way so that all students have equal access.

These reasons all seem very rational to me. Still, it’s striking to me that “test security” dwarfs all others.

That’s where it becomes clear to me that the killer feature of hardware calculators is their lack of features. I wrote above that your mobile device “sends text messages, takes photos, and accesses webpages.” At home, those are features. At school, or at least on tests, they are liabilities. That’s a fact I need to think more about.

I work in a BYOD school. What I have learned is that the best way to disengage students from electronic devices is to promote learning that involves student sharing of discussion, planning, thinking, and solving problems. When the students are put “centre stage,” the devices start becoming less interesting.

The restriction on calculation aids and internet connections still stems from a serious cultural issue we have in mathematics teaching — the type of questions that we ask. While we continue to emphasise the importance of numerical calculations and algebraic manipulation in assessment, electronic aids to these skills will continue to be an issue.

Instead, we should shift the focus to understanding the situation presented, setting up the equations and then making sense of the calculation results. With this shift, the calculations themselves are relatively unimportant so it doesn’t really matter how the student process them. Digital aids can be freely used because they are off little use when addressing the key aspects of the assessment tasks.

In many ways our current mathematics assessment approach is equivalent to a senior secondary English essay that gave 80% of the grade for neat handwriting and correct spelling. If this were the case then they too, would have to ban all electronic aids to minimise the risk of “cheating” by typing and using spell checking software.

If we change what we value in assessment then we can open up better/cheaper electronic aids for students.

2017 Mar 24. Related to Chris’s comment above, I recently took some sample SAT math tests and was struck by how infrequently I needed a calculator. Not because I’m any kind of mental math genius. Simply because the questions largely concerned analysis and formulation over calculation and solution.

we have iPads, & I require "airplane mode" & keeping device flat on desk during tests...learned that quick.

Teach the Controversy   Problems with Personalized Learning
Unless otherwise noted, everything you and I post here is licensed
for reuse under Creative Commons Attribution 4.0 International.