Who Wore It Best: Baseball Quadratics

Every week this summer I’m posting three versions of the same real-world task. Please tell me: who wore it best? 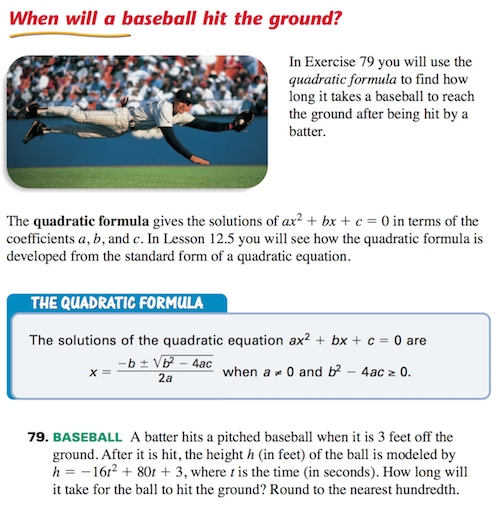 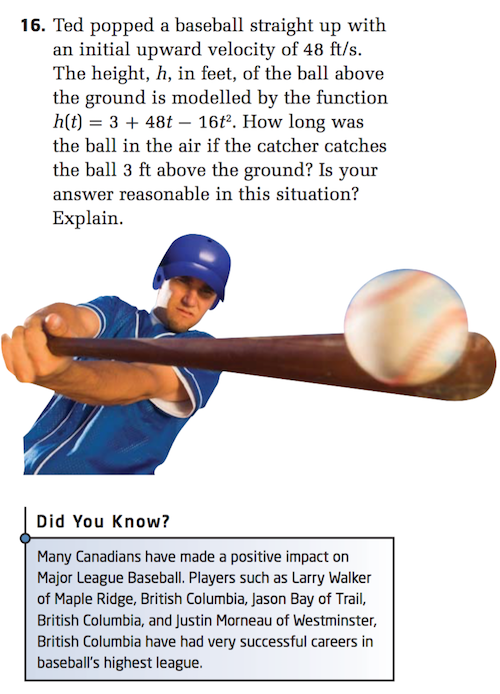 Chris Hunter claims, “The similarities here overwhelm any differences.” That’s probably true. So let’s talk about some of those similarities and what we can do about them.

My Least Favorite Phrase in Any Math Textbook

They each include the phrase “is modeled by,” which is perhaps my least favorite phrase in any math textbook. Whenever you see that phrase, you know it is preceded by some kind of real world phenomenon and proceeded by some kind of algebraic representation of that phenomenon, a representation that’s often incomprehensible and likely a lie. eg. The quartic equation that models snowboarding participation. No. 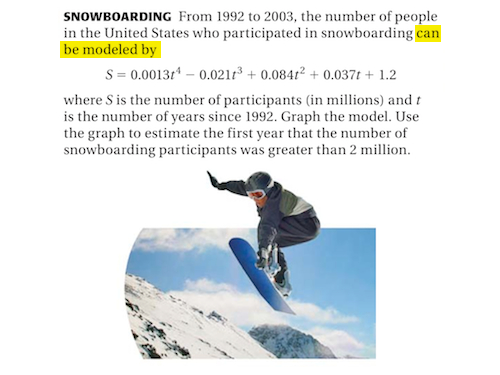 Chris Hunter notes that the equations “come from nowhere” and seem like “magic.” True. 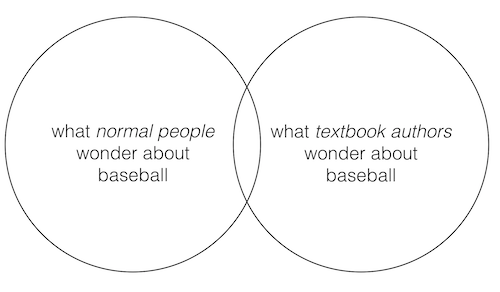 That isn’t necessarily a problem. Maybe we think we should ask the authors’ questions anyway. As John Mason wrote in a comment on this very blog on the day that I now refer to around the house as John Mason Wrote a Comment on My Blog Day:

Schools as institutions are responsible for bringing students into contact with ideas, ways of thinking, perceiving etc. that they might not encounter if left to their own devices.

But these questions are really strange and feel exploitative. If we’re going to use, rather than exploit, baseball as a context for parabolic motion, let’s ask a question like: “Will the ball go over the fence?”

And let’s acknowledge that during the game no baseball player will perform any of those calculations. This is not job-world math. So the pitch I’d like to make to students (heh) is that, yes, your intuition will serve you pretty well when it comes to answering both of those questions above, but calculations will serve you even better.

Ethan Weker suggests using a video, or some other visual. I think this is wise, not because “kids like YouTubes,” but because it’s easier to access our intuition when we see a ball sailing through the air than when we see an equation describing the same motion.

Here’s what I mean. Guess which of these baseballs clears the fence:

Now guess which of these baseballs clears the fence:

They’re different representations of the same baseballs — equations and visuals — but your intuition is more accessible with the visuals.

We can ask students to solve by graphing or, if we’d like them to use the equations, we can crop out the fence. If we’d like students to work with time instead of position, we can add an outfielder and ask, “Will the outfielder catch the ball before it hits the ground?”

This has turned into more of a Makeover Monday than a Who Wore It Best Wednesday and I shall try in the future to select examples of problems that differ in more significant ways than these. Regardless, I love how our existing curricula offer us so many interesting insights into mathematics, learning, and curriculum design.

I’ll throw ours into the ring: In which MLB park is it hardest to hit a home run?

Who Wore It Best: Maximizing Area   What the PISA Results Really Say About Pure and Applied Math
Unless otherwise noted, everything you and I post here is licensed
for reuse under Creative Commons Attribution 4.0 International.