Who Wore It Best: Barbie Bungee

If you tell me you’re a fan of real-world math, I know almost nothing about what goes on in your classroom. That’s because there’s enormous variation within real-world tasks. Almost as much as there is between real and “fake” tasks. (I’ve written about this before.)

Please tell me: who wore it best?

We’ll begin with Barbie Bungee, a lesson which is as old as math teaching itself. (The earliest reference I found in an exhaustive #lazyweb search on Twitter was this 1993 Mathematics Teacher article. Thanks, Norma.) If you’ve never heard of it, here is a video summary from Teacher Channel. 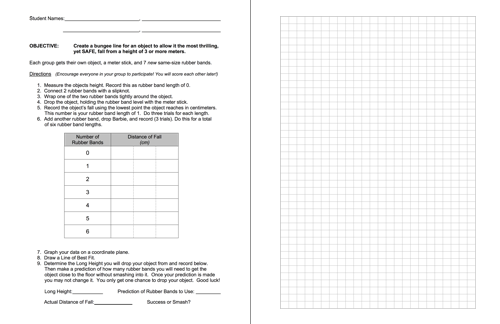 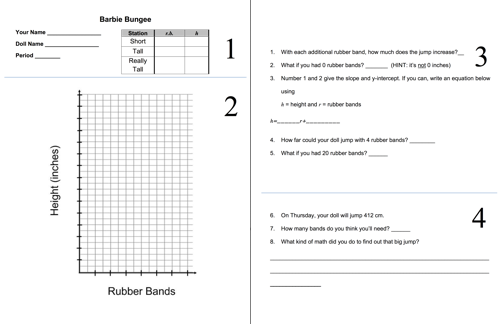 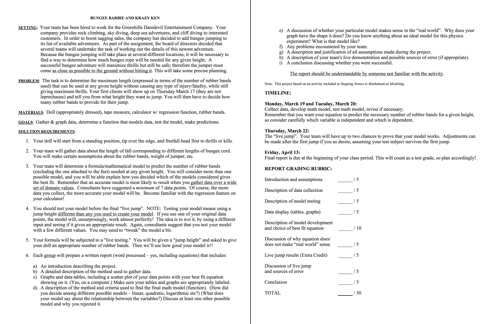 I previewed these problems on Twitter a week ago.

A number of people noticed that Version 3 asks for a lot of literacy in addition to numeracy. “Example 3 is too wordy for me and the students that I work most closely with,” said Bridget Dunbar.

I’m sympathetic. I was initially repelled by the dense text, but several educators I respect came along and noted that Version 3 leaves a lot of room for the teacher to develop the question along with students. Andrew Morrison said that “the structure of the activity is a lot more open ended than I expected based on the amount of text I initially saw.” Paul Jorgens used some of my favorite advice to support Version 3: “You can’t subtract but you can always add,” continuing to say that “the third one seems the easiest to start thin and add as necessary.”

A number of participants in the discussion said variations on, “It depends on the student.” That seems hard to falsify. Even if it’s true with these three worksheets, though, I don’t think that advice extends to any version of this task. Some are probably just bad.

For my part, I look at each version and try to imagine the verbs, the mental work students do. In each version of the task, the work becomes formal and operational very quickly. Version 1 has students measuring precisely in its first step. Version 2 has students graphing precisely in its first step. That’s important work but once the task has been formalized like that, it’s very difficult to ask students to do informal, imprecise work, which is just as important and often more interesting.

Like wondering what kinds of questions a bungee jump operator would wonder.

Like estimating how many rubber bands would be ideal for a given bungee jumping scenario. (Bridget Dunbar with the eagle eyes: “Version 2 misses estimation while Version 1 asks for it, but at the end of all of the directions.”)

Like abstracting the world of bungee jumping into a few manageable pieces of data which we can measure and track. (eg. The temperature outside probably doesn’t matter. The number of rubber bands probably does.)

Like sketching the relationship between rubber bands and fall height before graphing it.

It’s difficult to load all of those tasks onto the same piece or pieces of paper. Perhaps impossible, as later tasks will provide the answer to earlier tasks. My ideal Barbie Bungee task (and modeling task, in general) requires a dialog between teacher and students, with the teacher adding context, questions, and help, as the situation and students require it.

Watch Twitter for next week’s preview. You should find three versions of a task and play along at home.

I had a similar reaction to Version #3: all that text. Marc often asks “Who’s doing the math?” This, like “You can always add. You can’t subtract,” rattles around my head when designing or evaluating tasks. Version #3, for all that text, probably wore it best; in both Versions 1&2, the answer to Marc’s question is “The author.”

I wonder if the “step by step” worksheets that educators can be so fond of stems from the fear that students wouldn’t know what to do to solve the problem or from the idea that teachers have a vision for what the students’ output should look like. In versions 1 and 2, students will most likely have much cleaner products than those of version 3. I assume it’s some combination of both.

I wouldn’t say that it’s so much the case that “it depends on the student” as that it depends on the classroom culture. Teachers that have cultivated a culture of risk-taking, serious inquiry, and other habits of mind and practices that draw on the natural curiosity and need to know and understand that we all have (before it’s schooled out of us) are going to have enormous flexibility in designing or adapting tasks like this one so as to not wind up stifling individual thinking and productive struggle.

Unsolved Math Problems at Every Grade K-12   Your GPS Is Making You Dumber, and What That Means for Teaching
Unless otherwise noted, everything you and I post here is licensed
for reuse under Creative Commons Attribution 4.0 International.