“The Cup Is the Y-Intercept”

Are your students overgeneralizing their models? After working exclusively with proportional relationships for the last month, are they describing every new relationship as proportional?

This isn’t a task, or a lesson, or anything of that scope. It’s a resource, a provocation, one that gives students the chance to check their assumptions about what’s going on.

Play this video and pause it periodically, asking students to decide for themselves, and then tell a neighbor, what’s coming next. 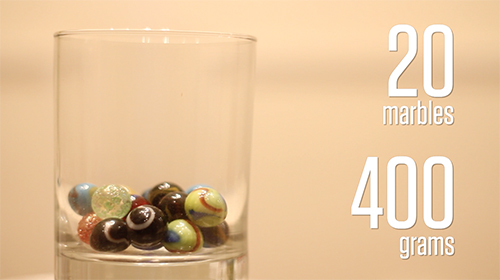 That will be surprising for some. Now invite them to speculate about 30 marbles. 40 marbles. And 0 marbles.

Let me end with three notes.

First, my thanks to Kevin Hall who had the fine idea for the video and encouraged me to make it. I’ve never met Kevin. That’s the kind of internet collaboration that makes my week.

Second, the stacking cups lesson offers a similar moment of dissonance. Can you find it?

What I seek is neither calculators and computers as educational technology nor as technological education but as a powerful to arouse and increase mathematical understanding.

I always like creating a proportional reasoning speed bump by giving these types of questions.

Hey! Nice idea for helping kids make the turn from proportional to linear relationships. There were two things I wanted to change:

– the discrete nature of the domain
– the way it’s not clear in the still images whether we are being shown the mass of just the marbles or the mass of the marbles + the glass together (the brief shot of the balance scale with the glass on it at the beginning of the video wasn’t doing it for me).

So I made a video! Here! It was shot on my phone using a jar of cumin to stabilize, so it could certainly be professionalized.

Math: Improve the Product Not the Poster   The Difference Between Sketching and Graphing
Unless otherwise noted, everything you and I post here is licensed
for reuse under Creative Commons Attribution 4.0 International.