At a workshop in New York City yesterday, I was complimented in the morning for my In-N-Out Burger activity (which was actually created by Robert Kaplinsky) and in the afternoon for my File Cabinet activity (which was actually created by Andrew Stadel). This mix-up will come as no surprise to either Andrew or Robert or anyone who has ever seen the three of us presenting at a conference together. This happens all the time. 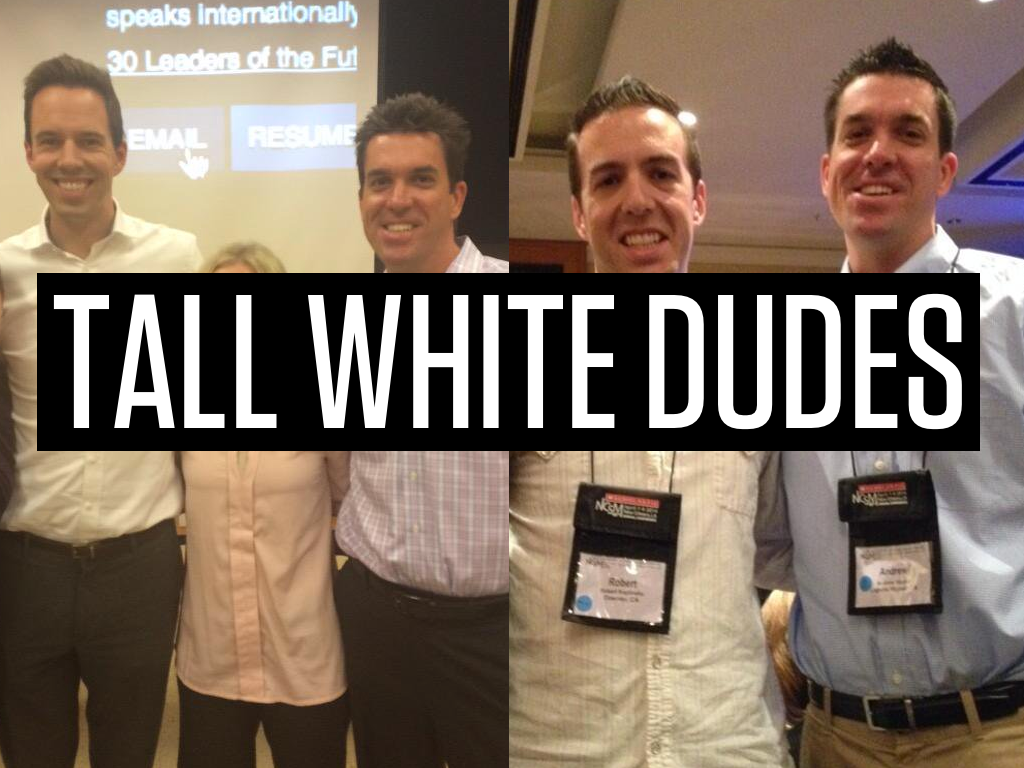 Also this week I received an email from May-Li Khoe, a researcher at Khan Academy, reflecting on her experience seeing Fawn Nguyen keynoting CMC-North. Both May-Li and Fawn are Asian-American.

I did not expect to be so affected by having Fawn speak during the keynote. Obviously the content of her presentation made an impression on me, but reflecting back later, I realized that I have never seen anyone remotely resembling myself as a keynote speaker, at any conference, ever.

We want all students to see themselves as people who can do mathematics, regardless of their race, ethnicity, gender, or any other variable. The power of mathematical thinking is good for everybody, and nobody should feel like their identity excludes them from that power.

So if you’re organizing a conference, I’m asking you to consider inviting any of the names below to give a talk before you consider inviting another tall, white dude. I’ll personally vouch for all of their abilities to deliver outstanding talks to large rooms of people. I have included Twitter contact information for each of them, along with websites and sample talks. I’m also happy to connect you with any of them personally. Let me know.

Add someone deserving or promising in the comments. Attach the same information you see above.

2016 Dec 14. The commenters have already caught a bunch of my really embarrassing omissions. Thanks for picking up my slack, everybody.

2016 Dec 16. In response to this critique from TODOS, I’d like to clarify that, yes, this list is incomplete, and my hope was that it would be made more complete in the comments. Additionally, my process in constructing the list is inherently biased towards a) speakers who have already given addresses to large rooms, which likely reflects the institutional biases of organizations who rent large rooms, b) speakers I have already seen, many of whom probably don’t challenge my privilege in ways I’d find uncomfortable, c) speakers who address secondary educators on themes of technology and curriculum design, themes reflective of my own disciplinary interests, d) speakers whom I could remember, which reflects my own lousy memory.

In spite of all those biases, I decided it was better for this list to exist than to not exist. I’m interested in hearing from TODOS (or anybody else) how this project could have done a better job advancing the interests of students and teachers of color.

I was in graduate school before I had my first Persian teacher (if you exclude my education in Iran). It was an amazing experience, and I did every ounce of work possible in that class.

[Pseudocontext Saturdays] Fish Tank   Shock and Disbelief in Math Class
Unless otherwise noted, everything you and I post here is licensed
for reuse under Creative Commons Attribution 4.0 International.