Karim Ani, the founder of Mathalicious, hassles me because I design problems about water tanks while Mathalicious tackles issues of greater sociological importance. Traditionalists like Barry Garelick see my 3-Act Math project as superficial multimedia whizbangery and wonder why we don’t just stick with thirty spiraled practice problems every night when that’s worked pretty well for the world so far. Basically everybody I follow on Twitter cast a disapproving eye at posts trying to turn PokÃ©mon Go into the future of education, posts which no one will admit to having written in three months, once PokÃ©mon Go has fallen farther out of the public eye than Angry Birds.

So this 3-Act math task is bound to disappoint everybody above. It’s a trivial question about a piece of pop culture ephemera wrapped up in multimedia whizbangery.

But I had to testify. That’s what this has always been —Â a testimonial — where by “this” I mean this blog, these tasks, and my career in math education to date.

I care about math’s power to puzzle a person and then help that person unpuzzle herself. I want my work always to testify to that power.

So when I read this article about how people were tricking their smartphones into thinking they were walking (for the sake of achievements in PokÃ©mon Go), I was puzzled. I was curious about other objects that spin, and then about ceiling fans, and then I wondered how long a ceiling fan would have to spin before it had “walked” a necessary number of kilometers. I couldn’t resist the question.

That doesn’t mean you’ll find the question irresistible, or that I think you should. But I feel an enormous burden to testify to my curiosity. That isn’t simple.

“Math is fun,” argues mathematics professor Robert Craigen. “It takes effort to make it otherwise.” But nothing is actually like that —Â intrinsically interesting or uninteresting. Every last thing —Â pure math, applied math, your favorite movie, everything — requires humans like ourselves to testify on its behalf.

In one kind of testimonial, I’d stand in front of a class and read the article word-for-word. Then I’d work out all of this math in front of students on the board. I would circle the answer and step back. 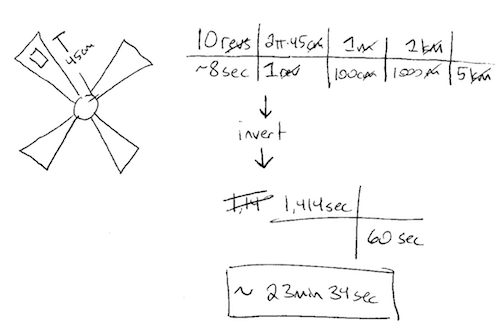 But everything I’ve read and experienced has taught me that this would be a lousy testimonial. My curiosity wouldn’t become anybody else’s.

Meanwhile, multimedia allows me to develop a question with students as I experienced it, to postpone helpful tools, information, and resources until they’re necessary, and to show the resolution of that question as it exists in the world itself.

So why are you here? What is your project? I care much less about the specifics of your project than I care how you testify on its behalf.

But I love how each one of them testifies on behalf of their project. When any of them takes the stand to testify, I’m locked in. They make their project my own.

Why are you here? What is your project? How do you testify on its behalf?

Related: How Do You Turn Something Interesting Into Something Challenging?

How 37 States Are Handling Teacher Shortages   A Very Valuable Conjecture
Unless otherwise noted, everything you and I post here is licensed
for reuse under Creative Commons Attribution 4.0 International.