Teaching for Tricks or Sensemaking

Here are two approaches to teaching zero exponents that are worth comparing and contrasting: 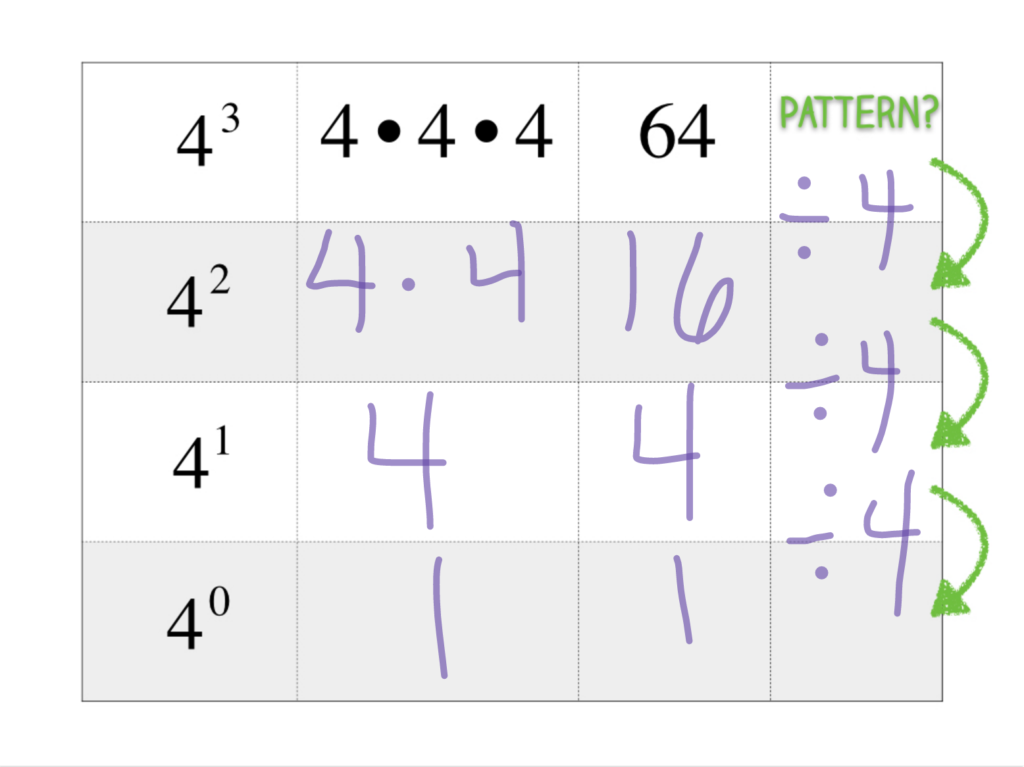 One approach will lead students to understand that math is a fragile set of rules that have to be transmitted and validated by adults. The other will help students realize that these rules are strong and flexible, and exist to make math internally coherent, with or without any adults around.

BTW. This is as good a time as any to re-mention Nix the Tricks, the MTBOS’s collection of meaningless math tricks and great strategies for teaching those concepts with meaning instead.

BTW. Check out Cathy Yenca’s own post on the comparison.

BTW. Check out the comments on that YouTube video. Interesting, right? What do we do with that?

I wrote a story about this exact moment in my book. Cliffs notes version: 8th grade. Mr. Davis told us the rule a^0=1. I questioned why. “Because that’s the rule.” I said, “But why?” Stern voice now. “Because that’s what’s I just told you.” The first boy I’d ever kissed said, “Give it up T! It’s in the book, that’s why!” Everybody laughed. Me too, on the outside. Not on the inside. On the inside I was angry and frustrated and humiliated. If I write my math autobiography, this moment goes in it. It’s one of the moments math lost me.

By the way, my favorite way to see the pattern Cathy shows here is with Cuisinaire rods. You literally go from cubes to squares to rods to single unit squares. It’s this amazing moment to see one as the fundamental unit.

The saddest part? Most kids don’t try again after they’re burned. They never come back. The not-quite-saddest-part-but-still-sad-part? I doubt Mr. Davis ever learned why either.

That’s the biggest legacy of that story to me, as a teacher. How do we handle the moment when it becomes clear, in front of the class, that we don’t understand some math we thought we understood? Do we handle it like Mr. Davis did, and view kids’ questions as challenges to our expertise and authority? Or do we say, “You know, your question is making me realize I don’t understand this as deeply as I thought I did. That’s awesome, because now I get to learn something. Let’s figure it out together.”

Something that has been effective for me (that I mention in the video above) is to really emphasize that 1 is the origin and invisible starting point of all multiplication problems.

There’s a truly great old lesson on exponentiation that I believe comes from Project SEED, that has been used with amazing success in hundreds of elementary classrooms.

education realist brings up a Ben Orlin post that includes a) a beautiful technique for teaching lots of rules of exponentiation and b) this beautiful paragraph:

Math’s saving grace, though, is that it can make us feel smart for another reason: because we’ve mastered an ancient, powerful craft. Because we’ve laid down rails of logic, and guided a train of thought smoothly to its destination. Because we’re masters–not over our peers, but over the deep patterns of the universe itself.

What Should Math Teachers Do When They Don’t Know the Math?   The Desmos Guide to Building Great (Digital) Math Activities
Unless otherwise noted, everything you and I post here is licensed
for reuse under Creative Commons Attribution 4.0 International.