What does it take to ask students a question like this? 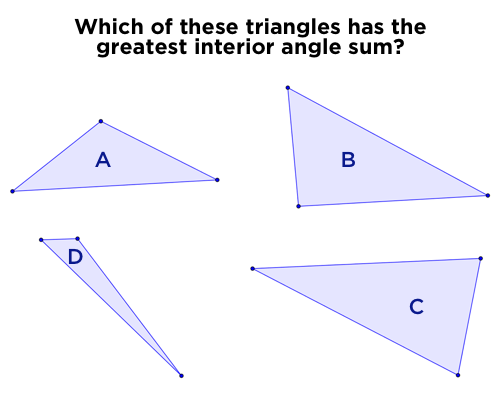 A poker face? A bit of malice? Nitsa Movshovits-Hadar argues [pdf] that it requires only the ability to trick yourself into forgetting that you know every triangle has the same interior angle sum. “Suppose we do not know it,” she writes, which is easier said than done.

The premise of her article is that “… all school theorems, except possibly a very small number of them, possess a built-in surprise, and that by exploiting this surprise potential their learning can become an exciting experience of intellectual enterprise to the students.”

This is such a delightful paper — extremely readable and eminently practical. Without knowing me, Movshovits-Hadar took several lessons that I love, but which seemed to me totally disparate, and showed me how they connect, and how to replicate them. I’m pretty sure I was grinning like an idiot the whole way through this piece.

@rawrdimus i.e. think less like a math teacher who knows how to write a circle equation

Not easy for math teachers to do!

@ddmeyer I did a similar thing with my Year 9 students and the trig ratios!!! Heaps of fun and surprise!

Elementary may actually have an advantage here! We play these games all the time. Some favorites:

Once the whole class is convinced they can’t you can get at why and then writing a rule for it. There is nothing an 8 year old likes better than proving the teacher wrong.

Theorems and formulae in textbooks should be marked with a “spoiler alert”.

Your GPS Is Making You Dumber, and What That Means for Teaching   What Do You Do on the First Day of School?
Unless otherwise noted, everything you and I post here is licensed
for reuse under Creative Commons Attribution 4.0 International.