Math: Improve the Product Not the Poster 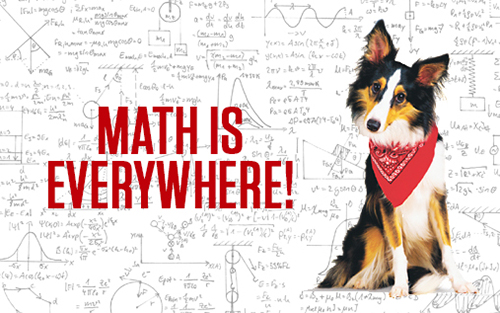 Danny Brown has expressed an interest in teaching mathematics that is relevant to students, relevant in important, sociological ways especially. This puts him in a particular bind with mathematics like Thales’ Theorem, which seems neither important nor relevant. 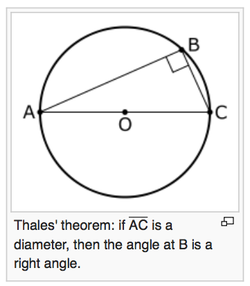 Here is Thales’ theorem. Every student in the UK must learn this theorem as part of the Maths GCSE. You are explaining Thales’ theorem, when one of the students in your class asks, “When will we ever need this in real life?” How might you respond?

He proceeds to offer several possible responses and then, with admirable empathy for teenagers, rebut them. Brown finds none of our best posters for math particularly compelling. You know the ones.

So instead of fixing our posters, let’s fix the product itself.

Brown’s premise is that students are listening to him “explaining Thales’ theorem.” Let’s question that premise for a moment. Is that the only or best way to introduce students to that proof? [2016 Jun 3. Brown has informed me that explanation is not his preferred pedagogy around proof and I have no reason not to take him at his word. So feel free to swap out “Brown” in the rest of this post with your recollection of nearly every university math professor you’ve ever had.]

Among other purposes, every proof is the answer to a question. Every proof is the rejection of doubt. It isn’t clear to me that Brown has developed the question or planted the doubt such that the answer and the explanation seem necessary to students.

So instead of starting with the explanation of an answer, let’s develop the question instead.

Let’s ask students to create three right triangles, each with the same hypotenuse. Thales knows what our students might not: that a circle will pass through all of those vertices.

Let’s ask them to predict what they think it will look like when we lay all of our triangles on top of each other.

Let’s reveal what several hundred people’s triangles look like and ask students to wonder about them.

My hypothesis is that we’ll have provoked students to wonder more here than if we simply ask students to listen to our explanation of why it works.

To test that hypothesis, I ran an experiment that uses Twitter and the Desmos Activity Builder and is pretty shot through with methodological flaws, but which is suggestive nonetheless, and which is also way more than you oughtta expect from a quickie blog post.

At the end of both treatments, I asked students “What questions do you have?” and I coded the resulting questions for any relevance to mathematics.

This suggests that interest in Thales’ theorem doesn’t depend strictly on its social relevance. (Both treatments lack social relevance.) Here we find that interest depends on what students do with that theorem, and in the experimental condition they had more interesting options than simply listening to us explain it.

So let’s invite students to stand in Thales’ shoes, however briefly, and experience similar questions that led Thales to sit down and wonder “why.” In doing so, we honor our students as sensemakers and we honor math as a discipline with a history and a purpose.

BTW. For another example of this pedagogical approach to proof, check out Sam Shah’s “blermions” lesson.

BTW. Okay, study limitations. (1) I have no idea who my participants are. Some are probably teachers. Luckily they were randomized between treatments. (2) I realize I’m testing the converse of Thales’ theorem and not Thales’ theorem itself. I figured that seeing a circle emerge from right triangles would be a bit more fascinating than seeing right triangles emerge from a circle. You can imagine a parallel study, though. (3) I tried to write the explanation of Thales’ theorem in conversational prose. If I wrote it as it appears in many textbooks, I’m not sure anybody would have completed the control condition. Some will still say that interest would improve enormously with the addition of call and response questions throughout, asking students to repeat steps in the proof, etc. Okay. Maybe.

Danny Brown responds in the comments.

As to the previous commenter, Thales’ theorem is not a particularly important piece of content in and of itself, but it’s one of my favorite proofs for students to build. It requires careful attention to definitions and previously-learned theorems as well as a bit of creativity. (Drawing that auxiliary line.) Personally, my favorite part of the proof is that students don’t solve for a or b, and in fact have no knowledge of what a and b are. but they prove that a+b=90. The proof is a different flavor than they are used to.

Why Secondary Teachers Don’t Want a GitHub for Lesson Plans   “The Cup Is the Y-Intercept”
Unless otherwise noted, everything you and I post here is licensed
for reuse under Creative Commons Attribution 4.0 International.