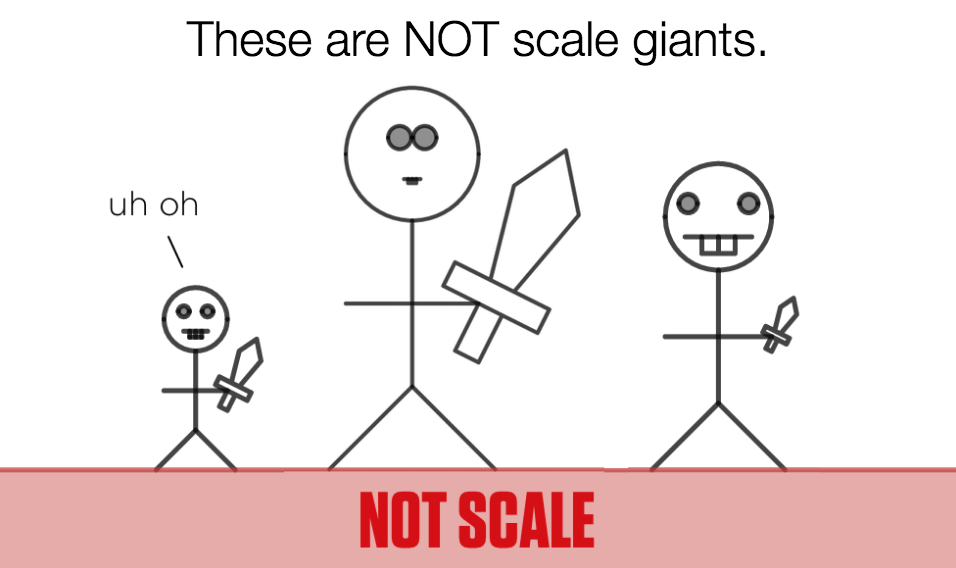 In Marcellus the Giant, the new activity from my team at Desmos, students learn what it means for one image to be a “scale” replica of another. They learn how to use scale to solve for missing dimensions in a proportional relationship. They also learn how scale relationships are represented on a graph.

There are three reasons I wanted to bring this activity to your attention today.

Marcellus the Giant is the kind of activity that would have taken us months to build a year ago. Our new Computation Layer technology let Eli Luberoff and me build it in a couple of weeks. We’re learning how to make better activities faster!

It’s hard for print curricula to connect to existing student thinking. Those pages may have been printed miles away from the student’s thinking and years earlier. They’re static.

In our case, we ask students to pick their own scale factor.

Then we ask them to click and drag and try to create a scale giant on intuition alone. (“Ask for informal analysis before formal analysis.”)

Then we teach students about proportional relationships by referring to the difference between their scale factor and the giant they created.

You made Marcellus 3.4 times as tall as Dan but you dragged Marcellus’s mouth to be 6 times wider than Dan’s mouth. A proportional giant would have the same multiple for both.

Our hypothesis is that students will find this instruction more educational and interesting than the kind of instruction that starts explaining without any kind of reference to what the student has done or already knows.

That’s possible in a digital environment like our Activity Builder. I don’t know how we’d do this on paper.

Marcellus the Giant allows us to connect math back to the world in a way that print curricula can’t.

If students change their equation, the world doesn’t then change to match. If the student changes the slope of the graph, the world doesn’t change with it. It’s really, really difficult for print curriculum to offer that kind of dynamic representation.

But we can. When students change the graph, we change their giant.

[Pseudocontext Saturday] Mazes   Great Classroom Action
Unless otherwise noted, everything you and I post here is licensed
for reuse under Creative Commons Attribution 4.0 International.