Let’s Talk About The Future of NCTM

I doubt I’m NCTM’s median or ideal member. Accommodating all my wishes below might be a great way to doom the organization. That said, my wishes are the only ones I have. So make yours known too.

NCTM membership promises lots of benefits, but chief among them in my mind are advocacy, professional development, and community. Here are some thoughts about NCTM’s present work in each of those three categories and some hopes for its future.

In the era of the Common Core State Standards, math education is a matter of national and local interest. Nationally, witness Andrew Hacker’s op eds in the New York Times. Locally, witness your Facebook timeline and all the parents complaining about lousy “Common Core” worksheets. (“What do you mean the Common Core didn’t make this worksheet? It says it’s theirs right in the link!“)

At a time when everybody seems to have an opinion or a comment, it’s really hard for me to locate NCTM’s opinion or comment.

There were three years between the release of the final Common Core State Standards and NCTM’s statement announcing its support. Borrowing from Twain, lies about the array model can travel halfway around the world when NCTM takes three years to put on its shoes.

Or try to find NCTM’s advocacy more recently. By my count, The Atlantic has published six articles about math education since December. NCTM is quoted in none of them. Am I expecting too much? Do these reporters even have NCTM’s number in Reston, VA? I throw my dues into the collection plate so that, collectively, math teachers can have a louder megaphone than any one of us would have individually.

I experience NCTM’s professional development efforts through its journals and its conferences. Let’s talk about each.

I’ve had the latest issue of Mathematics Teacher in my backpack for the last three weeks. I’m trying to figure out why it doesn’t seem like urgent reading to me whereas there are about twenty math education bloggers in my feed whose posts will not wait and must be read immediately. I’m also wondering why I give JRME, NCTM’s academic journal, a lot more scrutiny relative to the teaching journals.

Here’s my idea. The teaching journals lack the kinetic energy of JRME and they lack the potential energy of blogs.

By “energy” I mean that the energy of a piece of writing is partly kinetic —Â what the author actually wrote — but also potential. Given the right forum, readers will come alongside those words, offer their own, and co-construct incredible kinetic energy out of that potential.

JRME articles have low potential energy but incredible kinetic energy. Responses to articles are only published after months or years but the articles themselves and their ideas are often very well-researched and very well-written. Articles in the teaching journals have lower kinetic energy than JRME articles (because it’s much harder to publish in JRME) and their potential energy is … also pretty low. For example, Albert Goetz’s response to my modeling article appeared 11 months after the original publication. That latency won’t allow us to convert the potential energy of my article into anything kinetic.

Short of taking down the paywalls, I don’t have a great idea for increasing the potential energy of the teaching journals. My colleagues Zak Champagne, Mike Flynn, and I have put in a great deal of thought trying to increase the potential energy of the conferences, though. For two years now, NCTM’s leadership has given us some room to play around with the very simple idea of giving every speaker a webpage for their conference session and then getting out of their way. Relative to dropping the paywall on the teaching journals, this is a very cheap idea.

And it seems successful also. They gave a small handful of speakers webpages this year. A week after NCTM’s annual meeting, there are 135 comments, all turning potential energy into kinetic energy without any marginal effort from NCTM. (Check out the energy at Kaneka Turner’s page for example. We haven’t even released video of her talk yet!) That system will scale. NCTM needs to make that system available to every speaker and they need to add the question to their speaker application form, “How will you help your attendees convert your ideas from potential energy to kinetic energy?” (Or something more appropriate for people who haven’t read this post. “How will you support your participants’ work after the conference?” maybe.)

Here is an area where my intuition totally failed me. My assumption was that math teachers who have found community online for free are less interested in paying money to find community in some distant city at an annual or regional meeting.

I was way wrong. 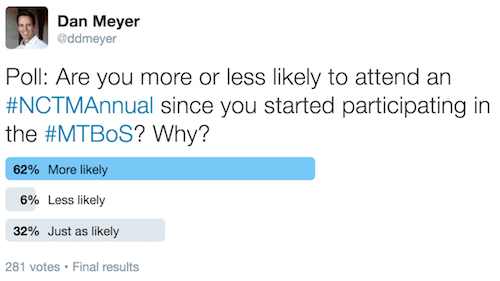 Feel free to scroll through the comments and read person after person describing how much more interested they are in attending a national conference knowing their online community will be there also.

NCTM needs to do everything they can to import and export that community.

They can import that community by making sure we’re all aware who the first time presenters are so veterans can attend their talks, support them, and also benefit from their perspectives. They can import that community by helping these unwashed bloggers and tweeps find their way to longstanding NCTM functions and events. And vice versa, by exporting themselves to blogging and tweeting events like ShadowCon, the Desmos Happy Hour, and Math Game Night. (Matt Larson checked me for not passing him an invite to the Desmos Happy Hour. That’s fair. This obligation goes both ways.)

NCTM can support these blogging and tweeting attendees after the conferences by giving them lots to blog and tweet about. Feed the community. It seems no one is tweeting about the teaching journals. But lots of people are tweeting about the release of the videos from the Ignite and ShadowCon talks. Jo Boaler’s talk was at capacity with a thousand people locked outside. You wouldn’t know from her conference listing that someone captured video of that talk. No one knows where to find it so no one is talking about it.

Fix that! Give every speaker a webpage. Help them understand how to turn its potential energy into kinetic energy, how to turn isolation into community.

Again, I imagine my needs are pretty idiosyncratic. I’ve been spoiled by blogging and tweeting and by the teaching community that lives on my phone and travels with me in my pocket wherever I go. So what are your professional needs? How well has NCTM been servicing them? What hopes do you have for its future?

Is the role of NCTM to be the leader of the frenetic #MTBoS blogosphere? Or is it to be the slow, more “craft beer” or “fine wine” place for ideas to ferment? What is the in between? Make your suggestions known because it is hard to be both.

The editorial board of TCM (full disclosure — which includes me) is working hard to create some kinetic energy around the journal. We are hold a #TCMChat each month on twitter around the free preview manuscript (Which coincidentally means we tweet the heck out of link to the free preview every month).

Early Friday morning of NCTM, I attended a focus group to discuss the future of NCTM and more specifically, their partnership with the Math Forum. Many issues were discussed including the ones you bring up here. But one that seemed to resonate with everyone in attendance was the people who work for the Math Forum. Joining the Math Forum and NCTM has given NCTM a face and a personality exemplified through the wonderful people that make up the Math Forum. They have helped bridge the divide, physically and metaphorically, between NCTM and the greater Math Twitter Blogosphere and have been a catalyst for the continuing conversation between these groups.

I have (what I think is) a really great linear systems lesson that I developed with my brother. It’s been accepted for publication in MT but it’s going to be about a two year gap between submission and publication.

Sam Shah posts his internal monolog every time he imagines inviting a teacher to submit an article to the teaching journals versus posting it on a blog. He closes with:

But for me as a part of a community which already shares ideas freely, comments on them, improves them… I don’t see how an NCTM journal can compare. Immediacy, feedback, and encouragement make blogging the choice for me.

Mary calls out her interest in extending the conversation in several sessions she attended. NCTM can support this.

There were several K-2 talks I attended at NTCM that I would love “to continue the conversation.” I tried Twitter, but the sessions had low turnout so there was no interaction. One was ELD and math, giving students position and power. They used Go Pros to observe from a child’s perspective and introduce change to their teaching. It was awesome; every k-2 teacher should have been there and needs to think about how we are giving voice and power to our students.

In regard to Advocacy, it isn’t all invisible. Check out http://www.nctm.org/news/ for NCTM press releases as well links to press coverage (with quotes from NCTM Presidents).

Julie Wright adds an appeal for participation in your local affiliate.

Great Classroom Action   [NCTM16] Beyond Relevance & Real World: Stronger Strategies for Student Engagement
Unless otherwise noted, everything you and I post here is licensed
for reuse under Creative Commons Attribution 4.0 International.