I Was Wrong About #BottleFlipping

I didn’t think there was a useful K12 math objective in bottle flipping. My commenters served their usual function of setting me straight.

I was asking the question, “Can you predict whether or not a bottle will land?” A modeling problem.

Commenters like Meaghan asked the question, “What conditions will set yourself up for success in bottle flipping?”

How much water in the bottle? What kind of angle on the toss? Clockwise or counterclockwise? These are statistical questions.

Paul Jorgens followed that angle with his class:

It started with an argument in class last week about the optimal amount of water in the bottle. Should it be 1/4 filled? 1/3? Just below 1/2? I told the group that we could use our extra period to try to answer the question. We met and designed an experiment. We thought about problems like skill of tosser, variation in bottles, etc. We started with 32 bottles filled to varying levels. During 20 minutes of class, 32 students flipped bottles 4,220 times. We the all filled in our data on a Google Sheet.

I meet again next week with the small group that had the idea. I think they want to produce something for school news. Did we answer the question about how much water to put in the bottle?

Check out the graph of their data. 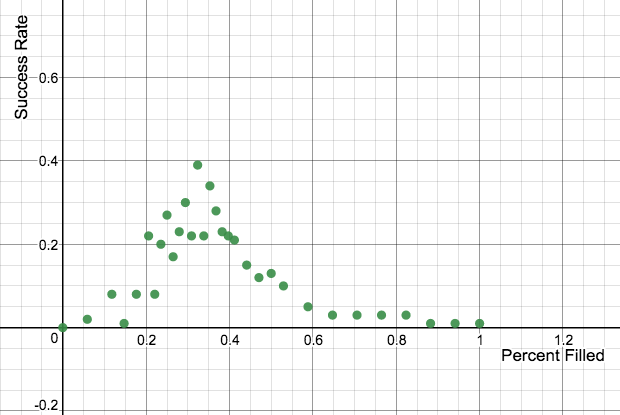 The Paper Helicopter is a similar exercise in experimental design. These activities come from the same template. If we understand that template, we can swap lots of different questions into the experiment, including those that seem most interesting to students in this moment.

We can teach students how to use mathematical tools to answer questions that interest them. We can also assign detentions. If there’s any middle ground, I’m not seeing it on Twitter right now.

.@ddmeyer thanks for the idea about bottle flipping you Tweeted last week. Tried my own version today and Ss loved it!

BTW. Here’s a Desmos activity you can use to facilitate data collection in your class. Your students add their data on the first screen. Then they see the sum of their class’s data on the second screen.

Four Ways to Not Quit Teaching   #BottleFlipping & the Lessons You Throw Back
Unless otherwise noted, everything you and I post here is licensed
for reuse under Creative Commons Attribution 4.0 International.