#BottleFlipping & the Lessons You Throw Back

2016 Oct 7. I was wrong about everything below. After admitting defeat to #bottleflipping, my commenters rescued the lesson.

I’m sorry. I went looking for a lesson and couldn’t find it.

Last spring, 18-year-old Mike Senatore, in a display of infinite swagger, flipped a bottle and landed it perfectly on its end. In front of his whole school. In one try.

That thirty-second video has six million views at the time of this writing. Bottle flipping now has the sort of cultural ubiquity that can drive even the most stoic teacher a little bit insane.

Some of my favorite math educators suggested that we turn those water bottles into a math lesson instead of confiscating them.

I was game. Coming up with a math task about bottle flipping should be easy, right? Watch:

Obviously unsatisfactory, right? But what would satisfy you. Try to define it. Denis Sheeran sees relevance in the bottle flipping but “relevance” is a term that’s really hard to define and even harder to design lessons around. If you turn your back on relevance for a second, it’ll turn into pseudocontext.

For me, at the end of this hypothetical lesson, I want students to feel more powerful, able to complete some task more efficiently or more accurately.

Ideally, that task would be bottle flipping. Ideally, students who had studied the math of bottle flipping would dazzle their friends who hadn’t. I don’t think that’s going to happen here.

The quadratic formula grants you no extra power when you’re in mid-air with the basketball. But when you’re trying to predict whether or not a ball will go in, that’s where math gives you power. 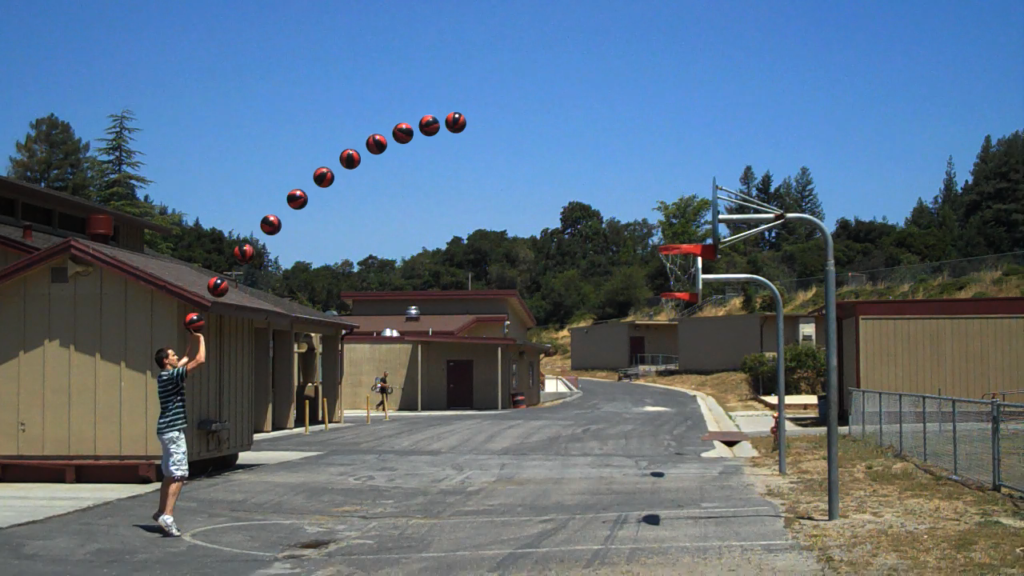 So in the same vein as that basketball task, here are four bottle flips from yours truly. At least one lands. At least one doesn’t. Each flip cuts off early and invites students to predict how will it land?

How can I shoot a slow-mo video of a projectile and have it appear over a coordinate plane in the background? @ddmeyer #bottleflips

Okay. Here’s a coordinate plane on top of each flip.

If you’ve been around this blog for even a day, you know what’s coming up: we’re going to show which flips landed and which flips didn’t. Ideally, the math students learn in the second act will enable them to make more confident and more accurate predictions than they made in the first act.

But what is that math?

I asked that question of Jason Merrill, one of the many smart people I work with at Desmos. I won’t quote his full response, but I’ll say that it included phrases like “cycloid type thing” and “contact angle parameter space,” none of which fit neatly in any K-12 scope and sequence that I know. He was nice enough to create this simulator, which has been well-received online, though even the simulator had to be simplified. It illustrates baton flipping, not bottle flipping

Here is the result of those bottle flips. For good measure, here’s a bottle flip from the perspective of the bottle.

Here’s a link to the entire multimedia package. Have at it. If you have a great idea for how we can resurrect this, let me know. I’m game to do some video editing on your behalf.

But when it comes to bottle flipping, if “math” is the answer, I’m not sure what the question is. Please help me out. What is the lesson plan? How will students experience math as power, rather than punishment.

Sure, it’s probably a bad idea to destroy the bottles. But it’s possible we shouldn’t turn them into a math lesson either. Maybe bottle flipping is the kind of silly fun that should stay silly.

2016 Oct 7. Okay: I was wrong about #bottleflipping. A bunch of commenters came up with a great idea.

I see a couple students playing the game during some down time and my immediate reaction is, â€œThereâ€™s gotta be some great math in there!â€ One of the boys who was playing sees my eyes light up. He looks at me in fear and says, â€œMrs. Raskin. Please. I know what youâ€™re thinking. Please donâ€™t mathify our game. Let us just have this one thing we donâ€™t have to math.â€

I suspect I should put as much effort into making this teachable as I would for dabbing.

Meaghan found a nice angle in on bottle flipping, along with several other commenters:

It would be neat if you could spend a, for example, physics class period talking about experimental design (for fill ratio questions or probability questions) and collecting the data, and then troop right over to math class with your data to figure out how to interpret it.

Paul Jorgens has the data:

It started with an argument in class last week with the optimal amount of water in the bottle. Should it be 1/4 filled? 1/3? Just below 1/2? I told the group that we could use our extra period to try to answer the question. We met and designed an experiment. Thought about problems like skill of tosser, variation in bottles, etc. We started with 32 bottles filled to varying levels. During class over 20 minutes 32 students flipped bottles 4,220 times.

I Was Wrong About #BottleFlipping   Ten Lessons from Ten Years of Blogging
Unless otherwise noted, everything you and I post here is licensed
for reuse under Creative Commons Attribution 4.0 International.