The Difference Between Pure And Applied Math

Henry Pollak, in his essay, “What Is Mathematical Modeling?”

Probably 40 years ago, I was an invited guest at a national summer conference whose purpose was to grade the AP Examinations in Calculus. When I arrived, I found myself in the middle of a debate occasioned by the need to evaluate a particular student’s solution of a problem. The problem was to find the volume of a particular solid which was inside a unit three-dimensional cube. The student had set up the relevant integrals correctly, but had made a computational error at the end and came up with an answer in the millions. (He multiplied instead of dividing by some power of 10.) The two sides of the debate had very different ideas about how to allocate the ten possible points. Side 1 argued, “He set everything up correctly, he knew what he was doing, he made a silly numerical error, let’s take off a point.” Side 2 argued, “He must have been sound asleep! How can a solid inside a unit cube have a volume in the millions?! It shows no judgment at all. Let’s give him a point.”

What a fantastic dilemma.

Pollak argues that the student’s error would merit a larger deduction in an applied context than in a pure context. In a real-world context, being wrong by a factor of one million means cities drown, atoms obliterate each other, and species go extinct. In a pure math context, that same error is a more trivial matter of miscomputation.

The trouble is that, to the math teachers in the room, a unit cube is a real-world object. They can hold a one-centimeter unit cube in their hands and, more importantly, they can hold it in their minds.

The AP graders aren’t arguing about grading. They’re trying to decide what is real.

What a fantastic dilemma.

Benjamin Dickman alerts us that Pollak’s piece is online, free, along with a number of his modeling tasks. 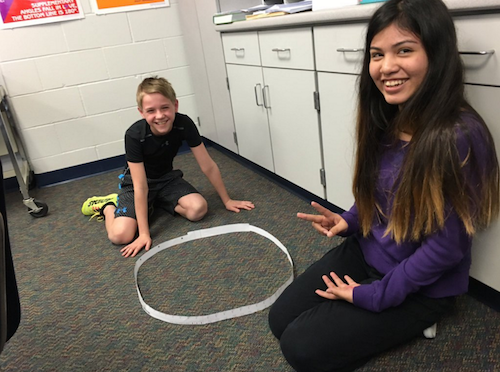 Annie Forest gives you ten ideas for your last week of class:

Here is my criteria for what makes a good mathy activities for the end of the school year: no/low tech; still incorporate math or problem solving in some way; fun and engaging.

Hey I’ll pitch one in! Here’s an eight-year-old blog post of mine. Every student starts with a 2D paper circle and by the end they’ve collaborated to construct a 3D icosahedron!

Marissa Walczak started carrying around a whiteboard as she helps students with their classwork:

If I wanted to show something to students I would always have to ask if I could write on their paper (which I really don’t ever want to do), or I’d have to say “wait for one sec” and then I’d go grab a piece of scratch paper, or I’d draw something on the board and then it’s far away from the group and then everyone sees it even though I don’t want everyone to see it.

Tina Cardone gets a lot of mileage out of a very simply-stated arithmetic problem:

In the next question students needed to decide what half of 2^50 would look like. All around the room students wrote 2^25. But children! We just talked about that! And then I realized that 1) it’s far from intuitive, that’s why they included more questions in the book to solidify this idea and 2) the language changed.