I spent an hour on The Kathleen Dunn Show on Wisconsin Public Radio earlier this week. I was disappointed we didn’t get around to my thoughts on #PackerNation and Steve Avery, but I enjoyed our conversation about math, education, and technology just the same. Even though Dunn admitted she’s uncomfortable with math, she was gracious enough to let me assign her a math problem. It was also my first time on a call-in show, and the callers did not disappoint. [Show link.]

The British Columbia Institute of Technology explains the origin of this task in their Building Better Math project:

Many high school students are avoiding math and cutting off pathways to exciting technical careers before they even know about them.

The BCIT has a very shiny coin here. They know better than anybody else — better than most teachers and curriculum developers, certainly —Â where our mathematical models are useful. I was blind to the mathematical modeling essential to the construction of a ramp at a boat dock, for example. BCIT helped me see it.

Here is one way to exploit them.

Show your students this video.

I begin so many of my applied tasks with video not because “kids love their YouTubes” but because multimedia allows me to de-mathematize a context that has already been heavily mathematized, leaving information, formulas, and other scaffolds to be revealed at an appropriate moment, and involve students in that process.

Ask your students, “What’s wrong with this scenario?” 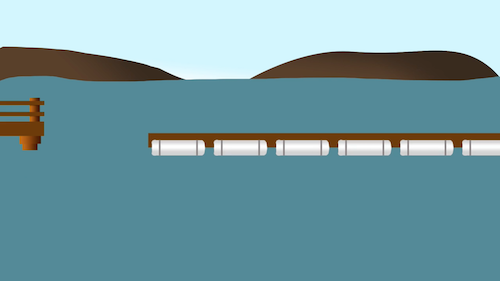 A: Without a ramp from pier to dock we can’t get on the boat.

Then ask students, “Which of these four ramps is best? Which is worst? Why?” 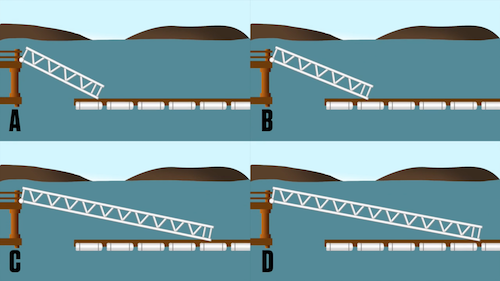 Learning. There are cognitive gains to be had by showing students contrasting cases of the same question and asking them to invent a measure to describe them. Here is an example from Schwartz and Martin (2004). 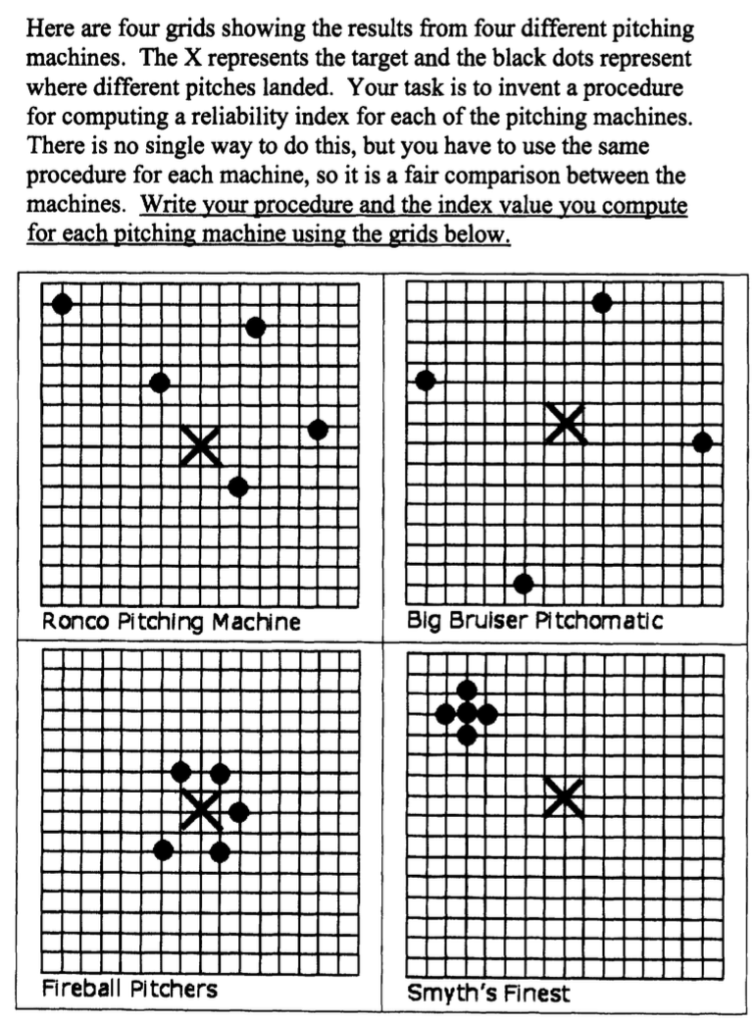 One group attempted to invent a measure and another group simply received instruction on the canonical measure. (“Variance” in this case.) Both groups then saw a worked example, after which the “invention” group outperformed the “tell-and-practice” group on a battery of measures. The invention activity helped students transfer in knowledge that prepared them to learn from explicit instruction later.

These multiple contrasting cases also allow me to ask students, “What measurements stay the same in every case? What measurements change?” That sets us up to assign variables to the changing measurements and quantities to the fixed measurements. The original problem offers only one case —Â one single ramp — offering us none of those cognitive gains.

Interest. As I summarized earlier, Sung-Il Kim’s research predicts that students will find this makeover more interesting than the original. Rather than explicitly stating the question and all of its relevant information, we’ve shown something incongruous and stated just enough that students will have to make the inferences that drive interest.

We should mathematize the context further now, assigning quantities to the measurements we know. (The distance the boat dock drops and the distance from the dock to the pier.) We should tell students the crucial constraint that the ramp can’t be any steeper than 18Â° as it meets the dock. We should model for students how a mathematician takes a context full of useless noise (eg. the color of the water, the shape of the hills) and draws a new version that includes only the useful details. 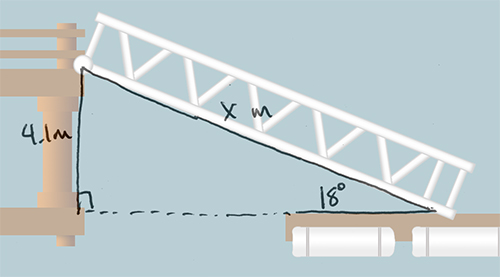 The problem is now where we started, fully mathematized. The goal of our previous work was to expand student access to the mathematics and also broaden that mathematics to include more verbs than just “calculate.” 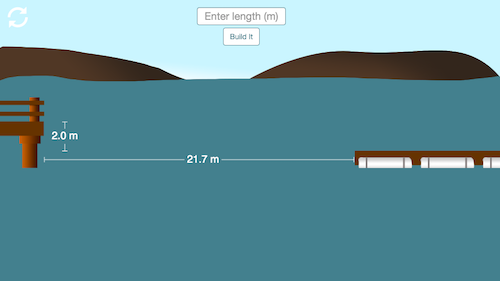 This allows us to extend the existing problem. Hit the refresh button and get a new boat dock. Another one. And another one. Can students turn their one correct answer into a method for quickly calculating the best ramp length for any boat dock? Can they write it in algebraic language?

I realize the new problem is more difficult to implement than the old. This new problem requires the teacher to involve herself in the posing of the problem and not just the assignment of the problem. It’s relatively easy to say to students, “Head over to this link and do the problem. I’ll be around to help if you need it.” It’s rather more difficult to embed yourself in that problem, to see yourself as an agent in the posing of that problem and the development of its question, even if the upside is better learning and more interest. This makeover is high reward at a high cost. At the moment, the reward interests me more than the cost.

I have also been rolling this same problem in my head, but I didn’t know about the Vancouver version. I teach on an island in Maine, where the tide swings are larger, and these kinds of contraptions are everywhere. I’ve thought about making a three-act type problem, but can’t wrap my head around the best application. I was thinking of doing it for more advanced trig in precalculus: Here’s the ramp, here’s the dock, and for what portion of the day will the ramp be usable? For walking up and down? For hauling a hand-truck? For a wheel-chair? How could you change it to make it usable for more of the day? How might the harbormaster foil your plans? This is a great problem for my context, because many of my less mathy students know more about harbor restrictions and practical “dockery” than I do.

Justin Brennan offers a word of caution about these job-world applications:

After spending 8 years as an engineer prior to teaching, I always felt that I’d include all kinds of stuff from my engineering life into teaching. However, now that I am slightly wiser and more humbled, that stuff is too specialized, only interesting to me and maybe 2 other kids on a good day.

I appreciate Justin’s testimony that “math + jobs = fun!” is too simple an equation. But rather than give up the “jobs” part altogether, I have attempted here to bring students into the job in a particular way. Not all job math problems are created equal, in other words.

Jonathan Newman made a simulator in Desmos. My concern with every simulator is that the person who made the simulator uses more math than the students do. Scaffolding questions around the simulator to simulate mathematical thought, as Jonathan does, is no small task.

I have been rolling the same math problem around in my head for the last two months. Here is a link and a PDF. 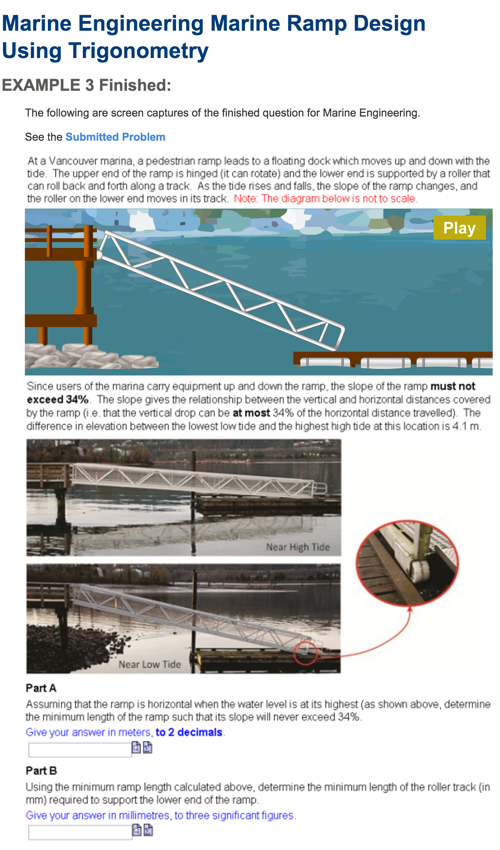 “Obsessed” wouldn’t be too sharp a description. Not with the math, which isn’t more advanced than high school trigonometry. Rather with the problem itself, and the opportunities it offers students to think mathematically.

So change that! How would you makeover this problem and help students experience all those interesting opportunities to learn mathematics?

On Monday, I’ll offer my own thoughts, along with a collaboration with Chris Lusto.

Which makes Geoff’s “crux” a form of mind control, or maybe inception, which is impossible. Kids wonder so many wonderful and weird things. And even if that practice were possible, I don’t think it’s desirable, since it seems to deny student agency while pretending to grant it. And even if it were desirable, I wouldn’t have the first idea how to help myself or other teachers replicate it.

If PBL is to survive, it needs a different crux. Here are two possibilities, one bloggy and one researchy.

[The point of math class is to] generate critical thought and discussion about mathematical schema that exist in the students minds. Draw out the contradictions, draw attention to the gaps in the structures, and you will help students to build sturdier, creatively connected, anti-fragile conceptual schema.

Production seems to help people let go of old interpretations and see new structures. We believe this early appreciation of new structure helps set the stage for understanding the explanations of experts and teachers —Â explanations that often presuppose the learner will transfer in the right interpretations to make sense of what they have to say. Of course, not just any productive experience will achieve this goal. It is important to shape children’s activities to help them discern the relevant mathematical features and to attempt to account these features (2004, p. 134).

Notice all the teacher moves in those last two quotes. They’re possible, desirable, and, importantly, replicable.

As a science teacher follower of your blog, I’m not sure I follow. Isn’t that what you are trying to do with many of your 3 act problems? Get a kid to ask questions like “is there an easier way to do this” or “what information do I need to know to solve this”?

I am interested in question-rich material that elicits lots of unstructured, informal mathematics that I can help students structure and formalize. But I never go into a classroom hoping that students will ask a certain question. I often ask them for their questions and at the end of lesson we’ll try to answer them, but there will come a moment when I pose a productive question.

The possibility of student learning needs to rely on something sturdier than “hope,” is what I’m saying.

2016 Jan 13. Geoff Krall writes a post in response, throwing my beloved Harel back at me. (My Kryptonite!) It’s helpful.

In the first example, Maggie and Claire exemplify basically all of the mathematical practices and then some as they try and fail and try and succeed to set up their marbleslides.

In the second example, Mr. Bondley recorded his students’ free play levels, some of which were quite elaborate.

As I mentioned on Twitter, I don’t want to overstate the matter, but I think we’re seeing a level of human creativity unknown since the time of da Vinci.

Start your own class!