What’s Wrong with This Experiment?

If you’re the sort of person who helps students learn to design controlled experiments, you might offer them W. Stephen Wilson’s experiment in The Atlantic and ask for their critique.

Wilson fears that students who depend on technology [calculators, specifically –dm] will fail to understand the importance of mathematical algorithms.

Wilson says he has some evidence for his claims. He gave his Calculus 3 college students a 10-question calculator-free arithmetic test (can you multiply 5.78 by 0.39 without pulling out your smartphone?) and divided the them into two groups: those who scored an eight or above on the test and those who didn’t. By the end of the course, Wilson compared the two groups with their performance on the final exam. Most students who scored in the top 25th percentile on the final also received an eight or above on the arithmetic test. Students at the bottom 25th percentile were twice as likely to score less than eight points on the arithmetic test, demonstrating much weaker computation skills when compared to other quartiles.

I trust my readers will supply the answer key in the comments.

BTW. I’m not saying there isn’t evidence that calculator use will inhibit a student’s understanding of mathematical algorithms, or that no such evidence will ever be found. I’m just saying this study isn’t that evidence.

I think you just found me a new example for chapter 4 (experimental design)...

The most clarifying thing that I can recall being told about testing in mathematics came from a friend in that business: you’ll find a positive correlation between student performance on almost any two math tests. So don’t get too excited when it happens, and beware of using evidence of correlation on two tests as evidence for much.

Here is the oldest kind of math problem that exists:

Some of you knew what kind of problem this was before you had finished the first sentence. You could blur your eyes and without reading the words you saw that there were two unknown quantities and two facts about them and you knew this was a problem about solving a system of equations.

Whoever wrote this problem knows that students struggle to learn how to solve systems and struggle to remain awake while solving systems. I presume that’s why they added a context to the system and it’s why they scaffolded the problem all the way to the finish line.

I asked that question on Twitter and I received responses from, roughly speaking, two camps.

One group recommended we change the adjectives and nouns. That we make the problem more real or more relevant by changing the objects in the problem. For example, instead of analyzing an animated movie, we could first survey our classes for the movie genres they like most and use those in the problem.

This makeover is common, in my experience. I don’t doubt it’s effective for some students, particularly those students already adept at the formal, operational work of solving a system of equations through elimination. The work is already easy for those students, so they’re happy to see a more familiar context. But I question how much that strategy interests students who aren’t already adept at that work.

Another strategy is to ignore the adjectives and nouns and change the verbs, to change the work students do, to ask students to do informal, relational work first, and use it as a resource for the formal, operational work later.

This makeover is hard, in my experience. It’s especially hard if you long ago became adept at the formal, operational work of solving a system of equations through elimination. This makeover requires asking yourself, “What is the core concept here and what are early ways of understanding it?”

No adjectives or nouns were harmed during this makeover. Only verbs.

The theater you run charges $4 for child tickets and $12 for adult tickets.

From there, I’m inclined to take Sunday’s sum (one he wasn’t lying about) and ask students how they know it might be legitimate. They’ll offer different pairs of child and adult tickets. “My no-good kid brother says he sold 342 tickets. Can you tell me if that’s possible?”

That path is wide. The narrow path asks us to understand that formal, operational ideas exists first as informal, relational ideas in the mind of the student, that our job is devise experiences that help students access those ideas and build on them.

BTW. Shout out to Marian Small and other elementary educators for helping me see the value in questions that ask about “big” and “small” answers. The question is purposefully imprecise and invites students to start poking at the edges of the relationship. 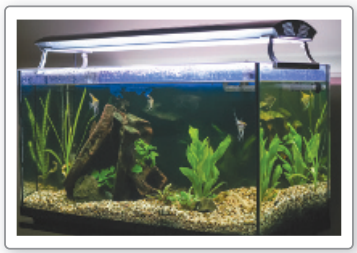 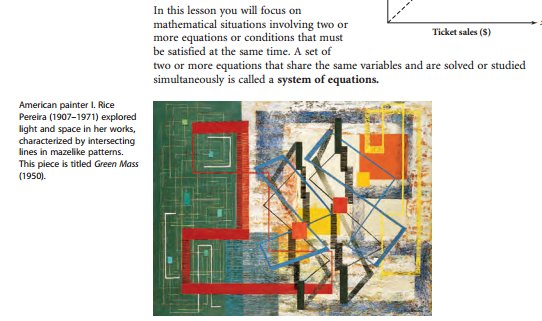 The judges rule that this satisfies the second rule of pseudocontext:

Given a question, the assigned method isn’t a method most human beings would use to find it.

Reasonable people might wonder about the dimensions of a water tank. The judges rule that most human beings would use a tape or a stick or any other kind of measuring device to answer it, not a cubic polynomial.

I can’t think of any way to neutralize this pseudocontext. The number of actual contexts for cubic polynomials with non-zero quadratic and linear terms is vanishingly small.

Here is an activity I would much prefer to use to teach the construction of polynomials. It doesn’t involve the real world but it does ask students to do real work.

One motif in pseudocontextual questions seems to be treating as a variable things that, you know, don’t vary. I have a funny video playing in my mind of some surprised fish watching the volume of their tank become negative. But happily the volume of that tank is not varying, inasmuch as it’s sides are made of glass.

Shock and Disbelief in Math Class

Then we got together to discuss the results in class. They remembered that a controls the “fatness” or “narrowness” of the parabola and sometimes flips it upside down. They remembered that c moves the parabola up and down. They weren’t totally sure what b did. A few students adamantly maintained that it moved the parabola left and right (with supporting examples). After about fifteen minutes of back and forth, we decided to go to Desmos and just animate b.

Shock and disbelief: the vertex traces out what looks like a parabola as b changes. Furious math and argument ensue. Ten minutes later, a student has what seems to be the parabola the vertex traces graphed in Desmos. Is it the right parabola? Why? Can we prove that? (We could and did!) 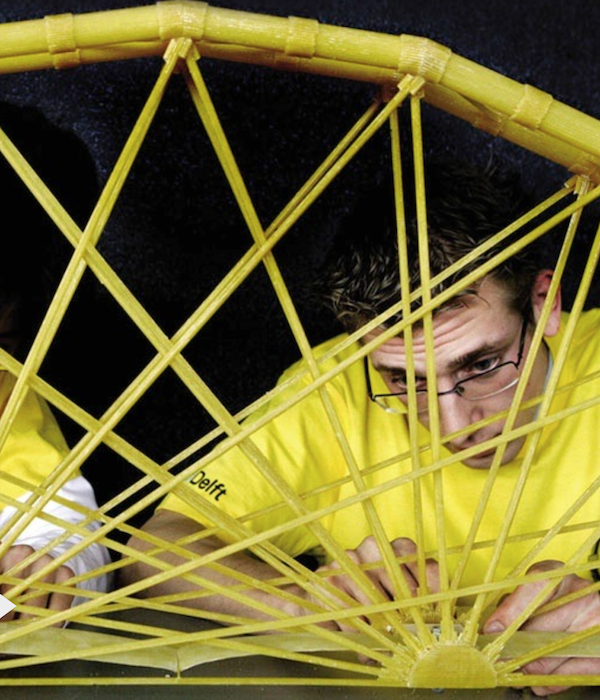 I’m kicking the number of options back up to three. Two options simply doesn’t give y’all the challenge I know you need. 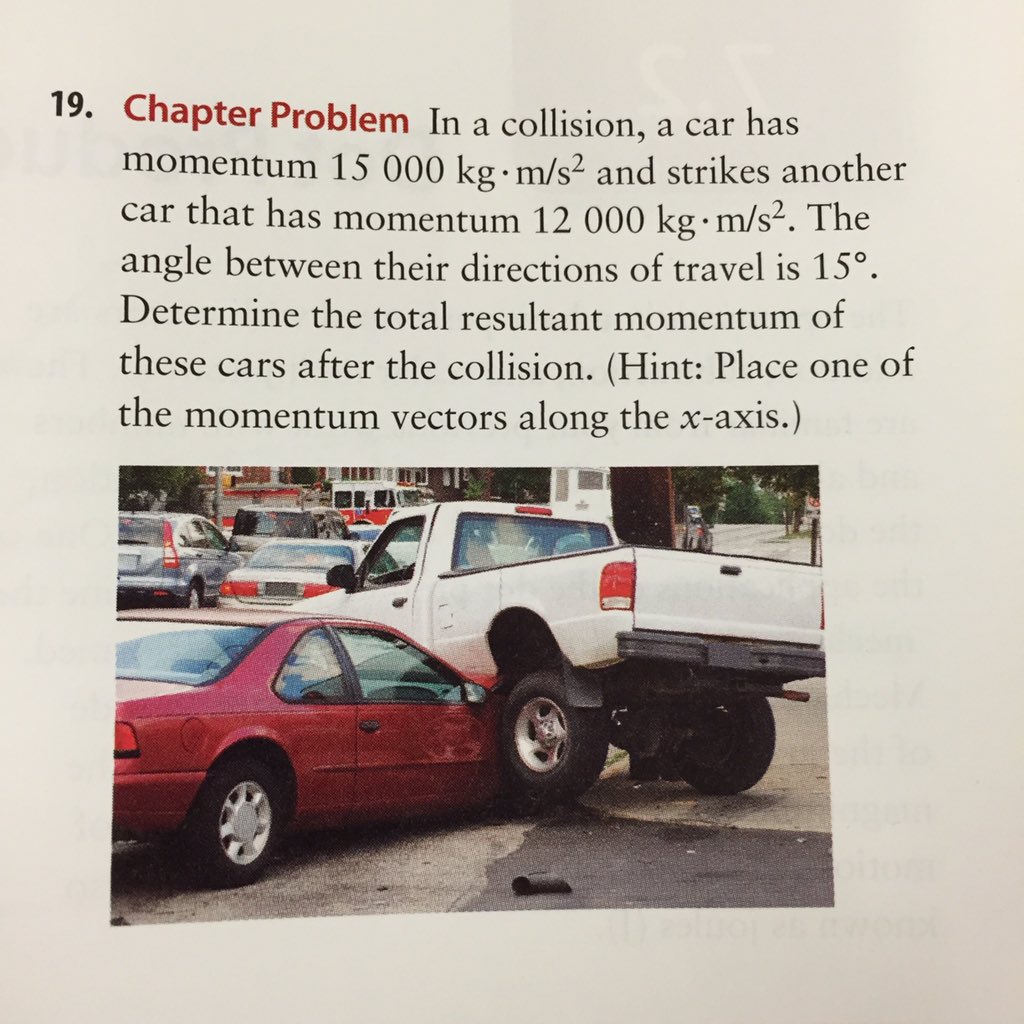 I don’t know if this is pseudocontext, but I for sure don’t know under what circumstances anyone would wonder about resultant momentum. In my head right now it’s like wondering about the middle names of the people who manufactured that car. It feels like trivia! I’m not saying it is trivia, but I am wondering if someone can put me in a position where knowing how to calculate resultant momentum would feel like power rather than punishment.

The commenters took this one right on the nose. The pseudocontext was in the last place they looked. 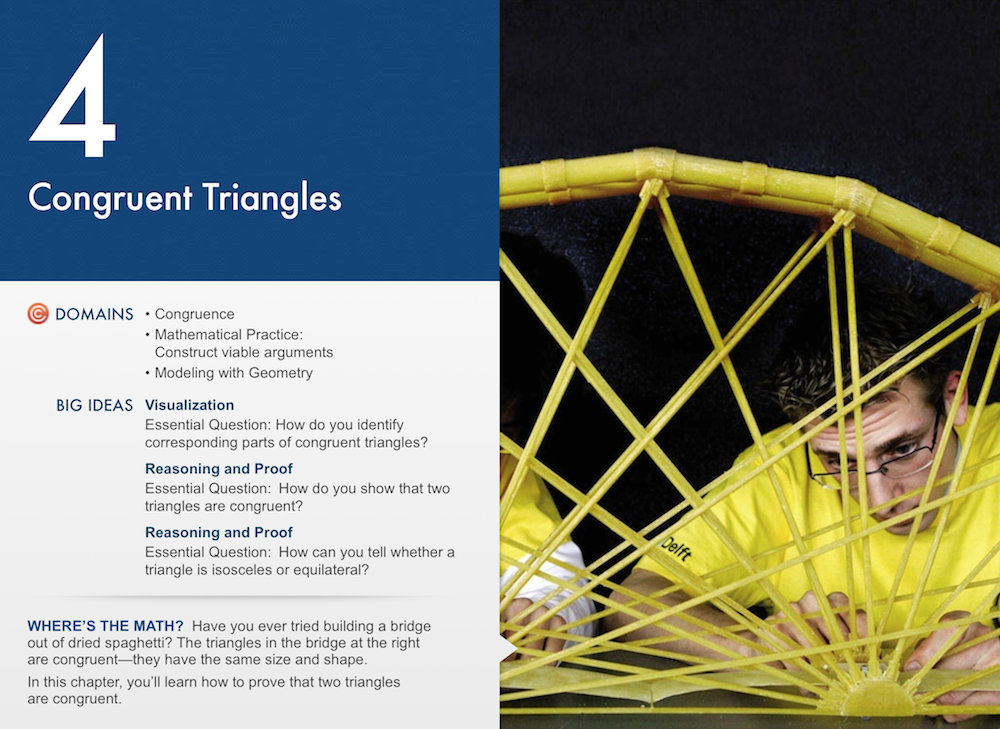 Moreover, I just don’t see any congruent triangles in the picture. None. I know I’ll see some if you widen the camera’s angle, but there aren’t any in the frame right now, which makes this a uniquely poor context.

The only way I can think to neutralize this pseudocontext:

Show students four spaghetti bridges. They have to decide which ones are fragile and which ones are strong. Understanding congruency somehow (waves hands) makes them more accurate in their decision-making.

I like physics. And math. One without the other is school.