Katharine Beals and Barry Garelick argue that students shouldn’t have to explain their answers in math class:

Is it really the case that the non-linguistically inclined student who progresses through math with correct but unexplained answers–from multi-digit arithmetic through to multi-variable calculus–doesn’t understand the underlying math? Or that the mathematician with the Asperger’s personality, doing things headily but not orally, is advancing the frontiers of his field in a zombie-like stupor?

I wouldn’t bet that the student with correct but unexplained answers understands nothing, but I wouldn’t make any confident bets on exactly what that student understands either.

Math answers aren’t math understanding any more than the destination of your car trip indicates the route you took. When five people arrive at the same destination, asking how each arrived tells you vastly more about the city, its traffic patterns, and the drivers, than just knowing they arrived.

Their other exemplar of understanding-without-explaining is strange also. Mathematicians advance the frontiers of their field exactly by explaining their answers — in colloquia, in proofs, in journals. Those proofs are some of the most rigorous and exacting explanations you’ll find in any field. 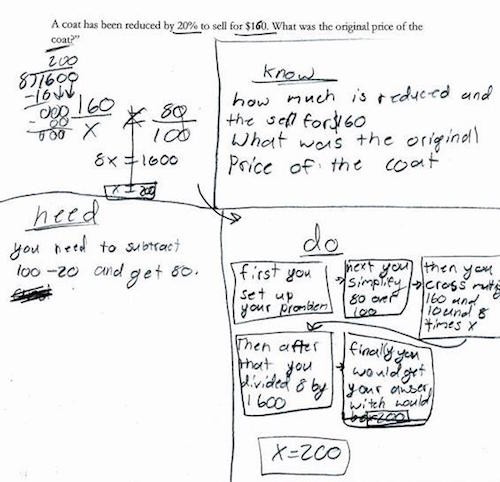 Understanding is the goal. The answer, and even the algebraic work, only approximate that goal. (Does the student know what “80” means in the problem, for example? I have no idea.) Let’s be inflexible in the goal but flexible about the many developmentally appropriate ways students can meet it.

Really too many to call out individually, but I’ll try.

Yet another important thing about students explaining their reasoning is that there is great self-help in a careful explanation of processes. How often have we had a student explain a problem he/she did incorrectly and, in the explanation, the student realizes the mistake without a word from us? This “out-loud-silently-in-my-head” thinking is such an important thing to help students develop.

Another reason that we might want to listen or read a student explanation of how they solved a problem is just so, in the process of articulating their solution, students may run into their own inconsistencies in their work. I have noticed, quite often, that students will give an answer that I don’t understand, and then when I ask them to explain what they did, in the middle of their explanation they say something like, “Oh, oops! Yeah that isn’t right. I mean this instead” and revise their thinking.

Mathematicians use words in describing their discoveries all the time — and have for a long time. That’s why some doctorates in mathematics require a foreign language so that the candidate can read the mathematicians’ writings in the original language.

Michael Pershan poses an interesting thought experiment that no one takes up:

1) Can the traditionalist and progressives find a lesson/activity/short video that they both agree is lovely teaching.
2) Same thing, but they both agree it’s lousy teaching.
3) Can each identify a whatever that they like, but their sparring partner doesn’t. Can they explain why.
4) If the disagreement persists, can they explain why they think it does?

Tracy Zager excerpts quotes from mathematicians on the value of explanation in their own work.

There is also an exchange between Brett Gilland and Ze’ev Wurman that lays bare two views on teaching that are completely distinct. It’s devastating.

You’ll find another great exchange between Brett Gilland and Katharine Beals (search their names throughout the comments) which ends rather unconventionally for Internet-based discussions of math education.

Jason Dyer’s Explanation Thought Experiment   October Remainders
Unless otherwise noted, everything you and I post here is licensed
for reuse under Creative Commons Attribution 4.0 International.