The Math I Learned After I Thought Had Already Learned Math

True story: it’s possible to fly through your own secondary math education — honor roll bumper sticker on your mom’s minivan and all —Â but miss some of the Very Big Ideas of secondary math.

Another benefit of evaluating both expressions for a set of values is to emphasize the equivalence of both expressions. Students lose the thread that simplifying creates equivalent expressions. All too often the process is seen as a bunch-of-math-steps-that-the-teacher-tells-us-to-do. When asked, “what did those steps accomplish?” blank stares are often seen.

Past a certain point, those operations are trivial. But it’s only past a point much farther in the distance that the understanding — these two rational expressions are equivalent —Â becomes trivial.

For another example: I left high school adept at graphing functions. I could complete the square and change forms easily. I knew how to identify the asymptotes, holes, and limiting behavior of those thorny rational expressions. But it wasn’t until I had graduated university math and was several years into teaching that I really, really understood that the graph is a picture of all the points that make the function true. This was difficult for me because graphs don’t often look like a bunch of points. They look like a line

That’s one reason I’m excited about the Desmos Activity Builder and this activity I made in it last week, Loco for Loci!

It asks students to place a point anywhere on a graph so that it makes a particular relationship true. Then it asks the students to imagine what all of our points would look like if we pictured them on the same graph. Then the teacher can show the results, underscoring this Very Big Idea that I didn’t fully appreciate my first time through high school — what we eventually think of as a continuous line is a picture of lots and lots of points.

Here is what happened when 300 people on Twitter played along:

“Drag the green point so that it’s the same distance from both blue points.” 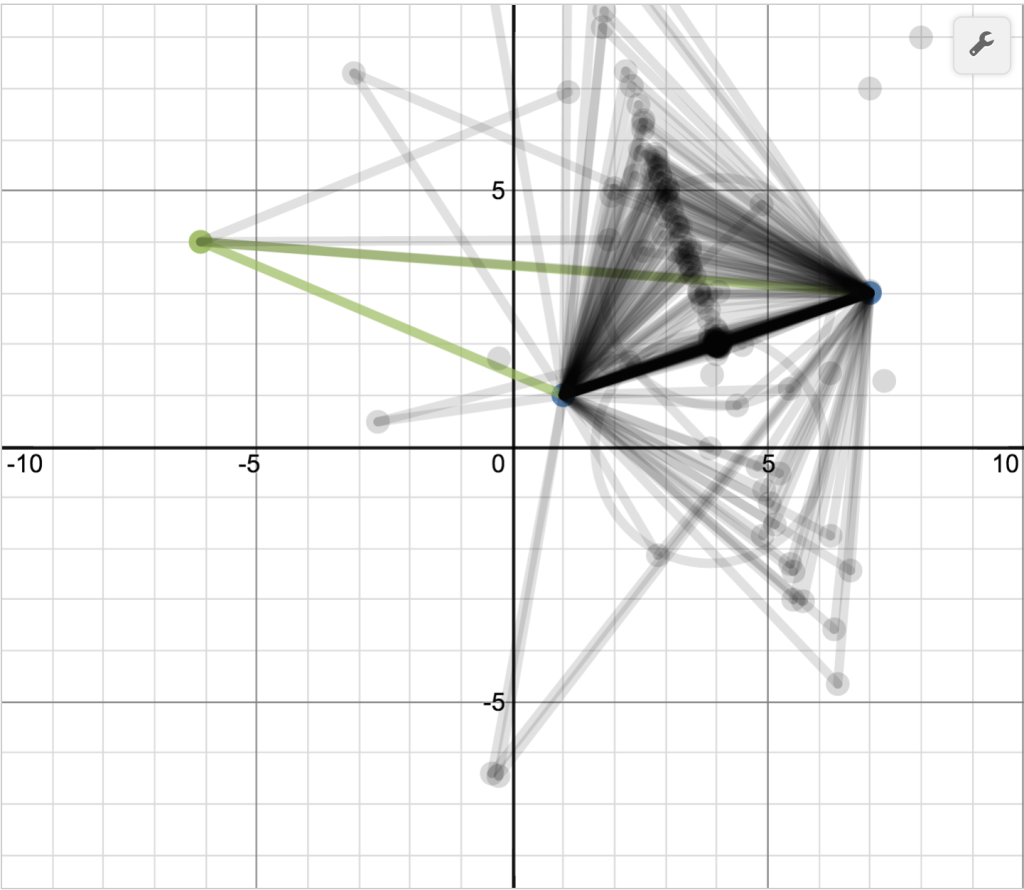 Trickier: “Drag the green point so that it’s five units from both blue points.” 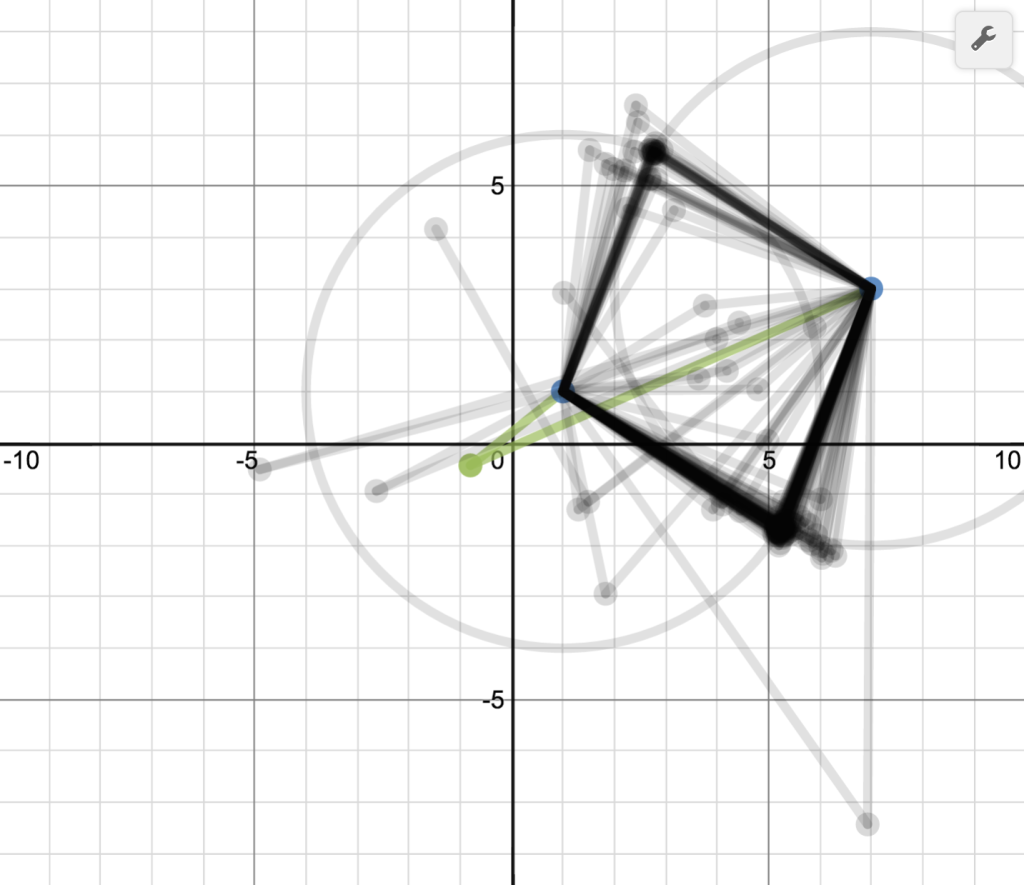 Whimsical: “Drag the green point so it is the same distance from a) the line of dinosaurs and b) the big dinosaur.” I really couldn’t have hoped for better here. 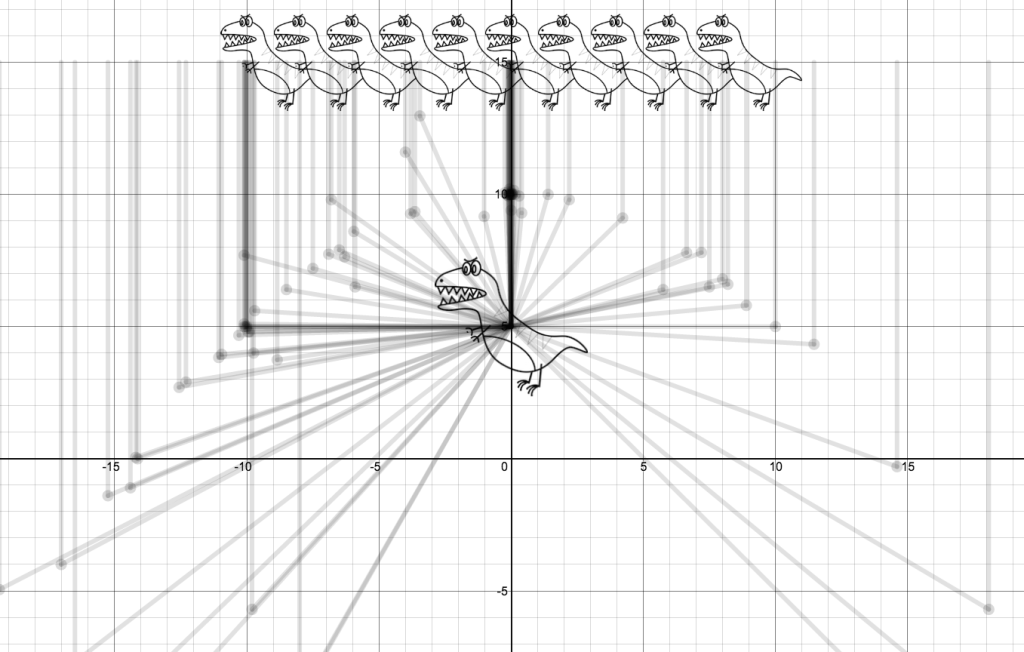 And then a couple of very interesting misfires.

“Drag the green point so that it’s four units from the blue point.” 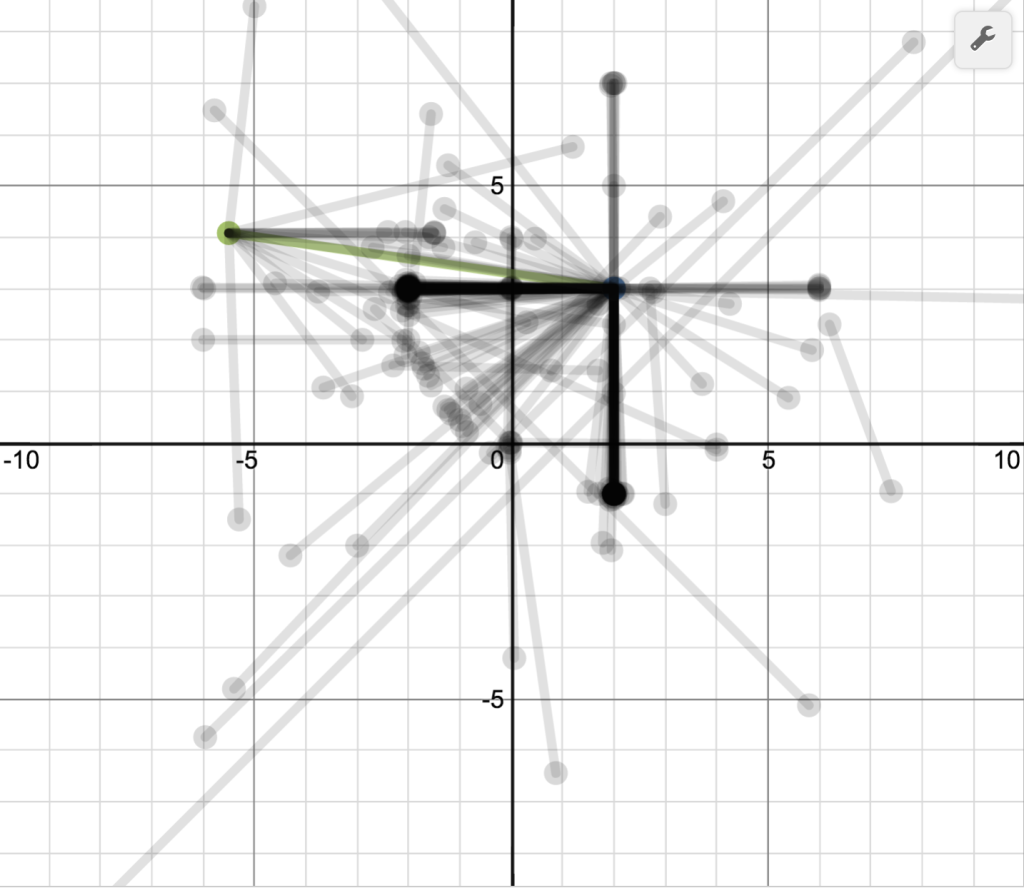 “Drag the green point so that a line segment is formed with a slope of .5.” 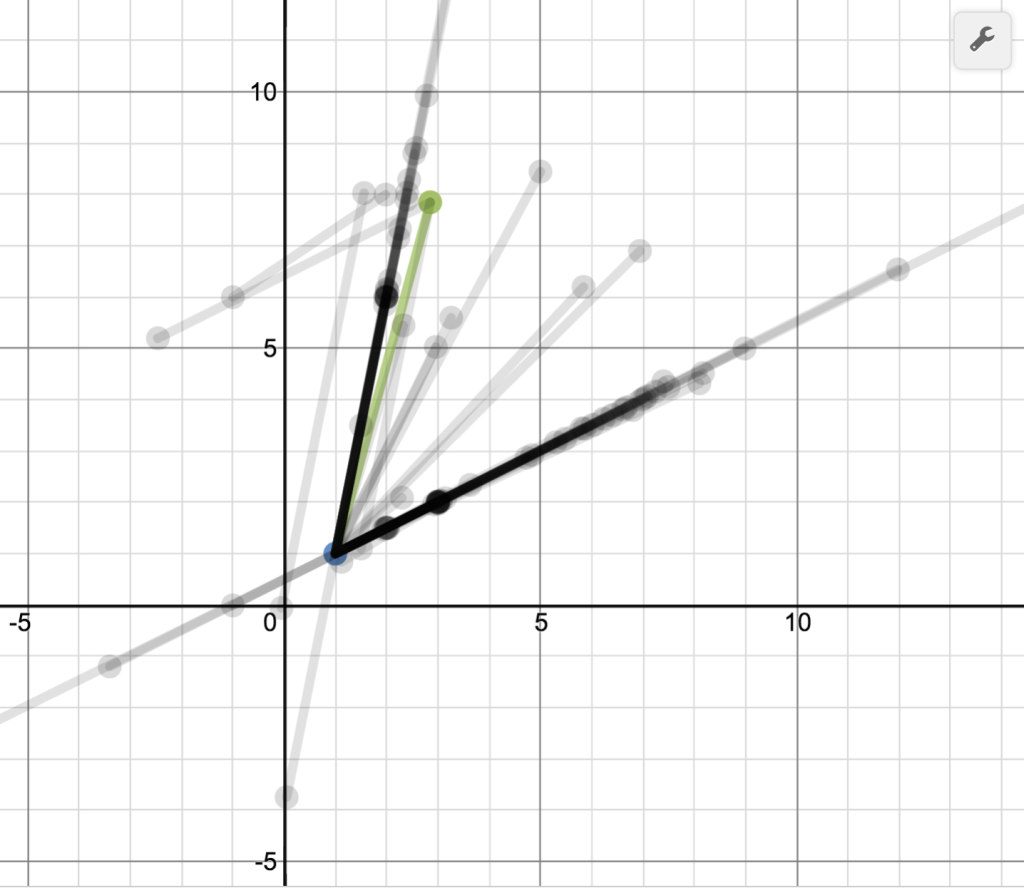 You could run a semester-long master’s seminar on the misconceptions in that last graph.

Maybe more like ten quick seconds at the start of your Algebra class.

If you’d like to run this activity with your own students, here is the teacher link.

Questions for the Comments

I find this sort of gap fascinating [my inability to conceive of graphs as a picture of solutions –dm] especially because it is likely somewhere along the line you were at least told this fact (you might even be able to track exactly where). But it still didn’t stick! It’s as if being told just isn’t enough.

The description you give about graphs is something we have to hit early and often in CME Project, it’s one of the top 3 things to learn in the entire curriculum. It’s amazing how that can get lost in the shuffle, but it does, and where it gets lost is the algorithmic way of graphing a function or equation: the A does this, the B does that, etc – all of this ignores the deeper fact that under the hood, this is all a relationship between two variables x and y.

The other two of Bowen’s top three things to learn in Algebra, according to Bowen on Twitter, are:

Amazing, all the people unburdening themselves on Twitter of math they only understood once they began teaching. What does it all mean?

A Response To Critics   If Simplifying Rational Expressions Is Aspirin Then How Do You Create The Headache?
Unless otherwise noted, everything you and I post here is licensed
for reuse under Creative Commons Attribution 4.0 International.