Professional Development: Getting Worse Before We Get Better 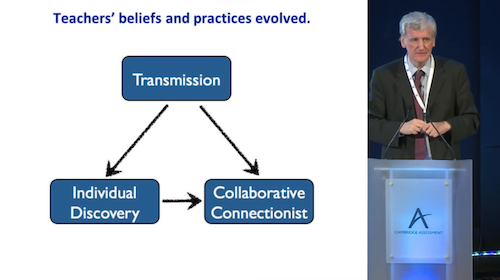 When we’ve done analyses of the results of [our professional development efforts], we’ve found that teachers often move from a transmission approach where they tell the class everything and the students have been fairly passive, they’ve usually moved in two directions.

The other place is where they move in and they challenge students and work with them on their knowledge together. That’s a better place. That’ smore effective.

And so in professional development, people take a path. Over time they might move from transmission to discovery to collaborative connectionist. So they might actually get worse before they get better.

That’s one of the problems with evaluating whether its been successful by looking at student outcomes. People take awhile to learn new things.

Earlier in the talk, he describes counterproductive designs for professional development:

So when you start with a professional development, you say, “Try this out in your classroom. It doesn’t matter if it doesn’t work. Then observe your students and then as a result you might change your beliefs and attitudes.”

You don’t set out by changing beliefs and attitudes. People only change themselves as they reflect on their own experiences.

And then productive ones:

If you’re designing a course, we usually start by recognizing and valuing the context the teacher is working in and trying to get them to explain and explore their existing values, beliefs, and practices.

And through this challenge we ask them to suspend their belief and try and act in new ways as if they believed differently.

And as they do this we offer support and mentoring as they go back into the classroom to try something out.

And then they come back together again and it’s taken over then by the teachers who reflect on the experiences they’ve had, the implications that come out of their experiences, and recognize and talk about where they’ve changed in their understandings, beliefs, and practices.

“I’m gonna use my formula sheets and that’s the only way I’m gonna do stuff.”   Marbleslides Is Here
Unless otherwise noted, everything you and I post here is licensed
for reuse under Creative Commons Attribution 4.0 International.