Our Fall Contest & This Is Not A Math Book 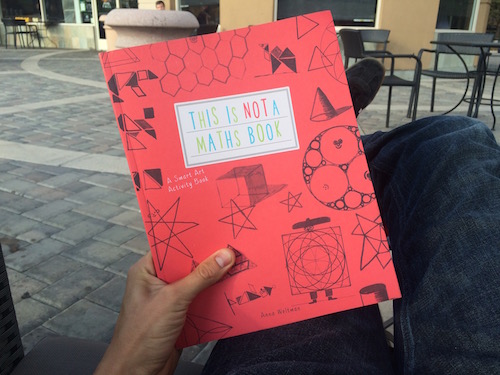 You should buy Anna Weltman’s new math book, This is not a Math Book.

You should buy several, probably, for all the little people in your life who are deciding right now what they think about math and what math thinks about them. If they’re taking their cues on that decision from someone who dislikes math or who dislikes little people, consider using This is not a Math Book for counterweight.

You’ll find dozens of pages of math art, math sketches, math reasoning, and math whimsy. I read it in one sitting outside a coffee shop one afternoon, big dumb smile on my face the whole time. Actually finishing the book, fully participating in Weltman’s assignments of creativity and invention, will take many more afternoons.

I’d like to send one of you a class set of Weltman’s book. Here is how you get it:

BTW. Over the next several days, Weltman is blogging interesting questions to ask your students about Loop-de-Loops.

@ddmeyer can this be outsourced to a class and we send in our favorites?

Students, we need to do this! See me if you're interested! (I already have the book — you need it in your life!) https://t.co/wOucB0Iq51

@ddmeyer @tchmathculture @AnnaWeltman How much do I love that a class set is 40 books? Thanks for the nod to the reality some of us face. :)

September Remainders   The Math Problem That 1,000 Math Teachers Couldn’t Solve
Unless otherwise noted, everything you and I post here is licensed
for reuse under Creative Commons Attribution 4.0 International.