This is from a worksheet I assigned during my last year in the classroom: 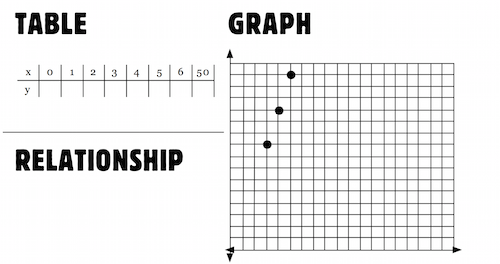 There are lots of good reasons to ask students for multiple representations of relationships. But I worry that a consistent regiment of turning tables into equations into graphs and back and forth can conceal the fact that each one of these representations were invented for a purpose. Graphs serve a purpose that tables do not. And the equation serves a purpose that stymies the graph.

By asking for all three representations time after time, my students may have gained a certain conceptual fluency promised us by researchers like Brenner et al. But I’m not sure that knowledge was ever effectively conditionalized. I’m not sure those students knew when they could pick up one of those representations and leave the others on the table, except when the problem told them.

Otherwise, it’s possible they thought each problem required each of them.

So here is the exercise. Take one representation. Now take another. Why did we invent that other representation? Now how do you put your students in a place to experience the limitations of the first representation such that the other one seems necessary, like aspirin to a headache?

All situations in statistics require some data, and the best data is that which students compile themselves. For this comparison a single set of data is best presented as a bar chart, but compare the data from five or more distinct groups of subjects, same measure, and the multiple strip bar chat is a bloody mess. Five box plots above the same numberline, and so much more is revealed, at a small cost of loss of detail.

I used to think that box plots were a waste of time until I saw the above usage.

The same is true of physical representations. I am thinking of many algebra growth problems that involve squares and growing patterns. It is valuable to ask students to go through the actions of adding squares to watch a pattern grow through the addition of tiles. This action can help them have the physical experience of a rate of change. But this representation also has its drawbacks. It is clearly cumbersome and not efficient.

Tables are great when you need to generate data from a scenario — you have a situation that has been given to you and you need a place to start. Creating a table for some initial data helps you see the patterns in whats happening and helps you make littler predictions about where the data is going. If I want students to appreciate tables, I give them a visual pattern or a scenario problem with a starting condition and a rate of change, then ask them some questions about what will happen.

Graphs are great when you’re given several random data points that, even when arranged as a table, don’t indicate a clear pattern. Sometimes plotting these visually helps you predict what other points could be missing, or what other points exist as the pattern continues. This is especially true for situations whose solutions depend on two variables, such as only having 30 dollars to spend on item A that costs 2 dollars and item B that costs 1 dollar. When I want students to appreciate graphs, I give them one of these situations (which usually lends itself to standard form of an equation, but they don’t know that) or I give them several data points and ask them what’s missing in the pattern. This is easier to see when organized visually and you you a particular shape to your points rather than a random collection.

Equations are the most efficient way to make predictions about patterns — if you’re given an equation, there’s no reason to have any other representation. Equations are useful for predicting far into the future for your data — maybe you can figure out the first few terms of your pattern, but trying to generate the 100th term is inefficient. Using an equation is like being omnipotent with a set of data. When I want students to appreciate equations, I give them a scenario but ask for a data point in the absurd future where the table or graph necessary to find the point would be too large and unwieldy to use.

The order I’ve presented these in this comment is also my typical order for presenting these representations to students: tables are useful at the beginning to generate data; graphs are useful once you have lots of it that may or may not be organized and may be missing some points, and equations are good for predicting the future.

A curious consequence might be: it’s not particular situations that necessitate one representation versus the other; rather, its what data you choose to give them at the beginning and what you ask them to do with it that makes one representation more valuable than another.

So very true. This skill seems to be neglected in our classrooms. Computers can take one representation and switch to others over and over again, much faster than humans can. If switching back and forth is your only skill, I can easily replace you with a $100 calculator from Target. And the calculator will be faster and more accurate.

But if I’m training students to be problem solvers who are smarter than computers, the “which representation is needed here” is a much more important question. I’m not aware of a computer that can answer that question.

Draw a simple line on a graph.

Now they see that the equation is quicker and more accurate than the graph – even when inside the graphed region.

Or draw two lines that do not meet at integer values. Where do they meet, exactly? Hence that simultaneous equations are better in some situations than graphs.

But again, we can draw y = log x crossing y = x2 quicker on our graphics calculator than we can solve it.

August Remainders   A Response To Critics
Unless otherwise noted, everything you and I post here is licensed
for reuse under Creative Commons Attribution 4.0 International.