If Simplifying Rational Expressions Is Aspirin Then How Do You Create The Headache?

In particular, adding rational expressions with unlike denominators, resulting in symbolic mish-mash of this sort here.

I’m not here to argue whether or not this skill should be taught or how much it should be taught. I’m here to say that if we want to teach it, we’re a bit stuck for our usual reasons why:

So our usual approaches to motivation fail us here.

I don’t believe the answer is “elegance” or “beauty” or any of the abstract ideals we often attribute to mathematicians. Talking about “efficiency” gets us closer, but still and again, we’re just talking about motivation here. Let’s ask students to do something.

We simplify because it makes life easier. It makes all kinds of operations easier. So students need to experience the relative difficulty of performing even simple operations on the unsimplified rational expression before we help them learn to simplify.

So with nothing on the board, ask students to call out three numbers. Put them on the board. And then put up this rational expression. 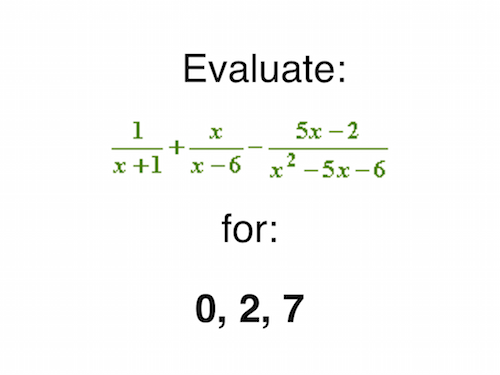 Ask students to evaluate the numbers they chose. It’s like an opener. It’s review. As they’re working, you start writing down the answers on Post-It notes, which you do quickly because you know the simplified form. You place one Post-It note beneath each number the students chose. You’re finished with all three before anybody has finished just one.

As students reveal their answers and find out that you got your answers more efficiently and with more accuracy than they did, it is likely they’ll experience a headache for which the process of simplification is the aspirin.

Again we find that this approach does more than just motivate the simplification process. It makes that process easier. That’s because students are performing the same process of finding common denominators and adding fractions with numbers, they’ll shortly perform with variables. We’ve made the abstract more concrete.

Again, I don’t mean to suggest this would be the most interesting lesson ever! I’m suggesting that our usual theories of motivating a skill —Â link it to the real world, link it to a job, link it to students’ lives — crash hard on this huge patch of Algebra that includes rational expressions. That isn’t to say we shouldn’t teach it. It’s to say we need a stronger theory of motivation, one that draws strength from the development of math itself rather than from a student’s moment-to-moment interests.

Another benefit of evaluating both expressions for a set of values is to emphasize the equivalence of both expressions. Students lose the thread that simplifying creates equivalent expressions. All too often the process is seen as a bunch-of-math-steps-that-the-teacher-tells-us-to-do. When asked, “what did those steps accomplish?” blank stares are often seen.

By a creating a “headache” using a theory of need, we’re really looking back to the situations that prompted the development of the mathematics we intend students to learn. We’re attempting to place students in the position of the mathematician/scientist/logician/philosopher who was originally staring down a particular set of mathematics without a clue about where to go and developing a massive headache from his hours of attempt. I love this idea because it transcends any subject and students learn the value of the learning process.

I feel like it’s a mathematical habit of mind. Mathematicians don’t like drudgery either. But what makes them different from a typical American math student is, rather than passively accepting the work as tedious and plowing ahead anyway, they do something about it. They look for a workaround, or another approach.

It is elegance, it is beauty, and I’m afraid I simply don’t buy the efficiency argument at all.

The Math I Learned After I Thought Had Already Learned Math   Literally Everything I Know About Modeling With Mathematics [SMP 4]
Unless otherwise noted, everything you and I post here is licensed
for reuse under Creative Commons Attribution 4.0 International.