If Proof Is Aspirin, Then How Do You Create the Headache?

This is too big for a blog post, obviously.

If proof is the aspirin, then doubt is the headache.

In school mathematics, proof can feel like a game full of contrived rules and fragile pieces. Each line of the proof must interlock with the others just so and the players must write each of them using tortured, unnatural syntax. The saddest aspect of this game of proof is that the outcome of the game is already known every time.

One of those proof prompts is not like the others. Its most important difference is that it leaves open the very question of its truth, where the other prompts leave no doubt.

The act of proving has many purposes. It doesn’t do us any favors to pretend there is only one. But one purpose for proof that is frequently overlooked in school mathematics is the need to dispel doubt, or as Harel put it, the “need for certainty“: 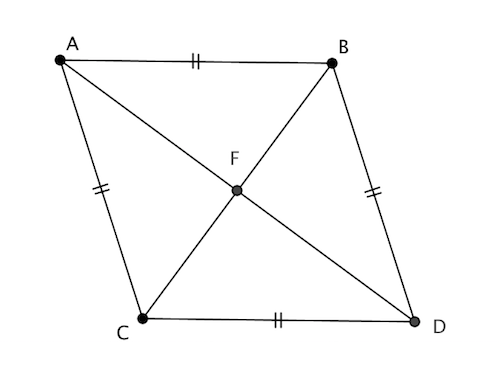 So instead of giving students a series of theorems to prove about a rhombus (implicitly verifying in advance that those theorems are true) consider sowing doubt first. Consider giving each student a random rhombus, or asking your students to construct their own rhombus (if you have the time, patience, and capacity for heartache that activity would require).

Now create a class list of conjectures. Interject your own, if necessary, so that the conjectures vary on two dimensions: true & false; easy to prove & hard to prove.

“Diagonals intersect at perpendicular angles” is true, but not as easy to prove as “opposite sides are congruent,” which is also true. “A rhombus can never have four right angles” meanwhile is false and easy to disprove with a counterexample. “A rhombus can never have side lengths longer than 100 feet” is false but requires a different kind of disproof than a counterexample.

Resolving this list of conjectures about the rhombus — proving and disproving each of them — will take more than a single period. Not every proof needs this kind of treatment, certainly. But occasionally, and especially early on, we should help students understand why we bother with the proof act, why proof is the aspirin for a particular kind of headache.

Simplifying sums of rational expressions with unlike denominators. Like this worked example from PurpleMath:

If that simplified form is aspirin, then how do we create the headache?

BTW. For anybody not on board this “headache -> aspirin” thing, I want to clarify: totally fine. Thanks for contributing anyway. But please name your priors. Why that task instead of another? Some of these tasks you all suggest in the comments seem great and full of potential, but tasks aren’t generative of other tasks. I need fewer interesting tasks and more interesting theories about what make tasks tick. These kinds of theories, when properly beaten into shape, have the capacity to generate lots of other tasks.

I think this latches onto the structure of the geometry course: we develop tool (A) to study concept (B). But curriculum can get too wrapped up in tool A losing sight of the very reason for its development. So, we lay a hook by presenting concept B first.

We almost always do an always-sometimes-never to motivate a particular proof. Mine are usually teacher-generated (here’s a list of 5 statements about rhombi — tell me if they are always, sometimes, or never true). Then we prove the always and the never.

Michael Paul Goldenberg and Michael Serra offer some very convincing criticism of the ideas in this post.

Let Me Just Set These Two Quotes Right Here Next To Each Other   Fake-World Math: When Mathematical Modeling Goes Wrong and How to Get it Right
Unless otherwise noted, everything you and I post here is licensed
for reuse under Creative Commons Attribution 4.0 International.