If Functions Are Aspirin, Then How Do You Create The Headache?

A relationship that maps one set to another can be confusing. Questions like, “What single element does 2 map to in the output set below?” are impossible to answer because 2 maps to more than one element. 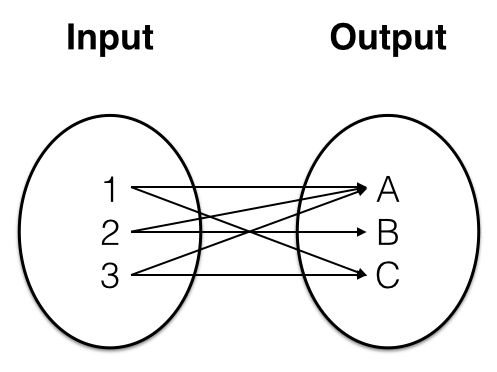 By contrast, a function is a relationship with certainty. Take any element of the input and ask yourself, “Where does this function say that element maps?” You aren’t confused about any of them. Every input element maps to exactly one element in the output. 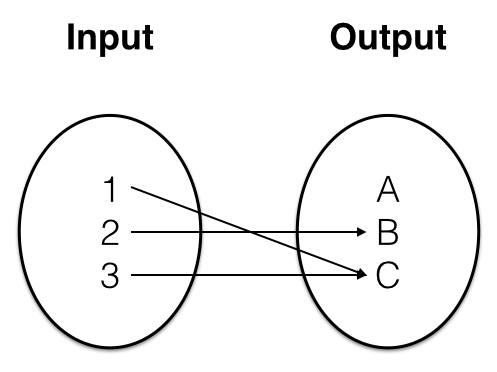 Pearson and McGraw-Hill’s Algebra 1 textbooks simply provide a definition of a function. Pearson’s definition refers to a previous worked example. McGraw-Hill has students apply the definition to a worked example immediately afterwards. Khan Academy dives straight into an abstract explanation of the concept. In none of these cases is the need for functions apparent. Students are given functions without ever feeling the pain of not having them.

Put the letters A, B, C, and D on your back wall, spaced evenly apart.

Ask every student to stand up. Then give them a series of instructions.

These instructions are all clear and easy to follow. Students are certain where they should go. Then give two other sets of instructions.

Perhaps you see how these last two examples generate a lack of certainty. Students were lulled by the first examples and may now feel a headache.

“I was born in August. There’s no place for me to stand.”

Now we gather back together and apply formal language to the concepts we’ve just felt. “Mathematicians call these three relationships ‘functions.’ Here’s why. Why do you think these relationships aren’t functions?” Invite students to interrogate the concept of a function in different contexts. Try to keep the focus on certainty — can you predict the output for any input with certainty? —Â rather than on the vertical line test or other rules that expire.

Students can become quite capable at executing that algorithm without understanding its necessity or how it figures into algebra’s larger themes.

What can you do with this?

Kate Nowak encouraged me to look at other textbooks beyond McGraw-Hill and Pearson’s. She recommended CME, which, it turns out, does some great work highlighting this need for functions. It asks students to play a “guess my rule” game, one which has a great deal of certainty. Each input corresponds to exactly one output. Then the CME authors offer a vignette where a partner reports multiple outputs for the same input, making the game impossible to play. Strong work, CME buds.

Your Conference Session Is The Appetizer. The Internet Is The Main Dish.   Graduation & What It Means To “Model With Mathematics”
Unless otherwise noted, everything you and I post here is licensed
for reuse under Creative Commons Attribution 4.0 International.