Graduation & What It Means To “Model With Mathematics”

This tweet from a friend of mine is one of my favorites.

8 names are read per min at the CHS graduation, I will be here for another 36min.. slooooow.

My friend has taken a problem from the world that was personal to her, identified the variables that are essential to the problem, selected a model that describes those variables, performed operations on that model, and re-interpreted the result back into the world. And tweeted about it. 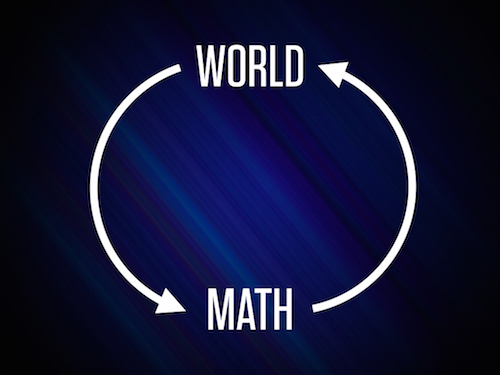 That is modeling — the process of turning the world into math and then turning math back into the world. My friend probably wouldn’t wouldn’t label her experience like that but that’s what she’s doing. That’s what people who do math in the world do.

We know how this looks in many textbooks, though.

The amount of time (t) it takes a number of graduates (n) to cross the graduation stage can be modeled by the function t(n) = n/8. How long will it take all 288 graduates to cross the stage?

Here students would simply perform operations on real-world-flavored math while the important and interesting work is in turning the world into that math and turning that math back into the world.

Here is an alternate treatment, one that has students modeling as the practice is described in the Common Core.

Ask: “If I want to set an alarm that’ll let me take a long nap until just before my cousin Adarsh crosses the stage, how should I set the alarm?”

By design, it’s a short video. I’d like it to be boring enough to provoke my friend’s modeling but not terminally boring.

By design, it lacks mathematical structures because we’d like students to participate in the process of developing those structures. They won’t do that unassisted.

Before we get to the algebraic model, we can ask some important and interesting questions.

How long do you think it will take my cousin to graduate? Just estimate.

I asked that on Twitter and received the following estimates:

These guesses interest us in a calculation and also prepare us to evaluate whether or not that calculation is correct.

Sketch the relationship between the number of graduates and time. 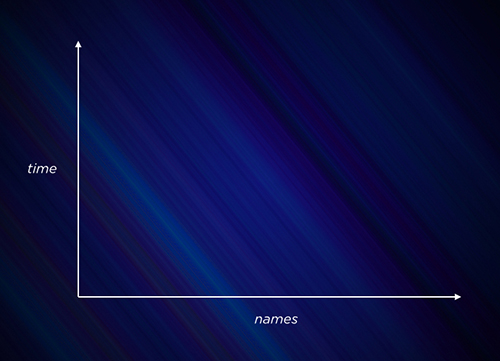 Asking students to sketch the relationship, rather than plot it precisely, asks them to think relationally (“how do these two quantities change together?”) rather than instrumentally (“how do I plot these points?”).

Many students will assume the data is linear. But this prompt may invite some students to consider the possibility that the data is non-linear.

Collect data. Model the data. Get an answer.

Ask students to create a table of values. Ask students to plot the data in Desmos. Regress the data. Give them the graduation program. Calculate an answer.

I plotted the first ten names and modeled their times with a linear equation. (“Time v. names read” was my model, though commenter Josh thinks “time v. number of syllables read” would be more accurate.) The calculation for cousin Adarsh’s 157th name is 19 minutes. I would be foolish to rely on that calculation, however.

Ask your students to “Assume your answer is wrong, that something surprising actually happens. Anticipate that something and fix your mathematical answer.”

George Box: “All models are wrong, but some are useful.”

Watch all of these math teachers make exactly those modifications in the comments of the preview post. They perform mathematical operations and then proceed to describe why the results of those operations are wrong.

Validate (or invalidate) the answer.

Commenter Mark Chubb, at the end of his modeling cycle: “Can’t wait to see Act 3.” Act 3 is the reveal in this task framework I call three-act math. It isn’t enough for Mark to simply read the answer in the back of the book or hear it from me. He wants to see it. So:

If you built a linear model from the first ten names, your answer winds up too large. Instead of 19 minutes, my cousin graduates at 17:12, sooner than the math predicted.

In the video, you can hear the validation of Julie Wright’s hypothesis above. The A’s and B’s get a lot of pomp, and then the commencement reader races through the rest.

Many congratulations to Megan Schmidt for her guess and to Scott and Kyle Pearce for their calculation. They all put down for 18 minutes. Special mention also to aga bey for 16.3 minutes. That commenter’s method? “I took the average of all submissions upthread.” Strong!

Again, if mathematical modeling requires the cycle of actions we find here, our textbooks typically only require one of them: performing operations. The purest mathematical action. The one that is often least interesting to students and the least useful in the world of work. So let’s offer students opportunities to experience the complete modeling cycle. Not just because those are the skills that most of the fun jobs require. But because modeling with math is fun for students now.

I ran into this when working up an exponential growth problem for my son’s precalculus class. The CDC had data on the number of Ebola cases which could be modeled with an exponential growth curve at the time. However, the math needed correction because of a sudden increase in cases. The CDC readily admitted they believe the cases were unreported by a factor of 1.5 to 2.5. Thus, a human eye on the data to recognize that and make an adjustment was necessary.

Later, when the curve could be modeled nicely by a logistics curve, the equation was still incorrect in predicting the end of the epidemic. As teachers we would like to be able to button everything up and wrap it in a bow, but the real world seldom works that way.