What Students Do (And Don’t Do) In Khan Academy

tl;dr — Khan Academy claims alignment with the Common Core State Standards (CCSS) but an analysis of their eighth-grade year indicates that alignment is loose. 40% of Khan Academy exercises assessed the acts of calculating and solving whereas the Smarter Balanced Assessment Consortium’s assessment of the CCSS emphasized those acts in only 25% of their released items. 74% of Khan Academy’s exercises resulted in the production of either a number or a multiple-choice response, whereas those outputs accounted for only 25% of the SBAC assessment.

My dissertation will examine the opportunities students have to learn math online. In order to say something about the current state of the art, I decided to complete Khan Academy’s eighth grade year and ask myself two specific questions about every exercise:

I examined Khan Academy for several reasons. First, because they’re well-capitalized and they employ some of the best computer engineers in the world. They have the human resources to create some novel opportunities for students to learn math online. If they struggle, it is likely that other companies with equal or lesser human resources struggle also. I also examined Khan Academy because their exercise sets are publicly available online, without a login. This will energize our discussion here and make it easier for you to spotcheck my analysis.

My data collection took me three days and spanned 88 practice sets. You’re welcome to examine my data and critique my coding. In general, Khan Academy practice sets ask that you complete a certain number of exercises in a row before you’re allowed to move on. (Five, in most cases.) These exercises are randomly selected from a pool of item types. Different item types ask for different student work. Some item types ask for multiple kinds of student work. All of this is to say, you might conduct this exact same analysis and walk away with slightly different findings. I’ll present only the findings that I suspect will generalize.

After completing my analysis of Khan Academy’s exercises, I performed the same analysis on a set of 24 released questions from the Smarter Balanced Assessment Consortium’s test that will be administered this school year in 17 states. 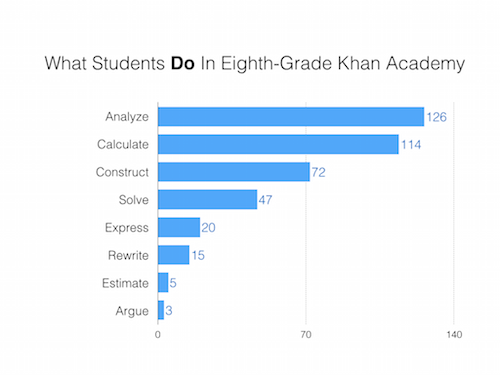 The largest casualty is argumentation. Out of the 402 exercises I completed, I could code only three of their prompts as “argue.” (You can find all them in “Pythagorean Theorem Proofs.”) This is far out of alignment with the Common Core State Standards, which has prioritized constructing and critiquing arguments as one of its eight practice standards that cross all of K-12 mathematics. 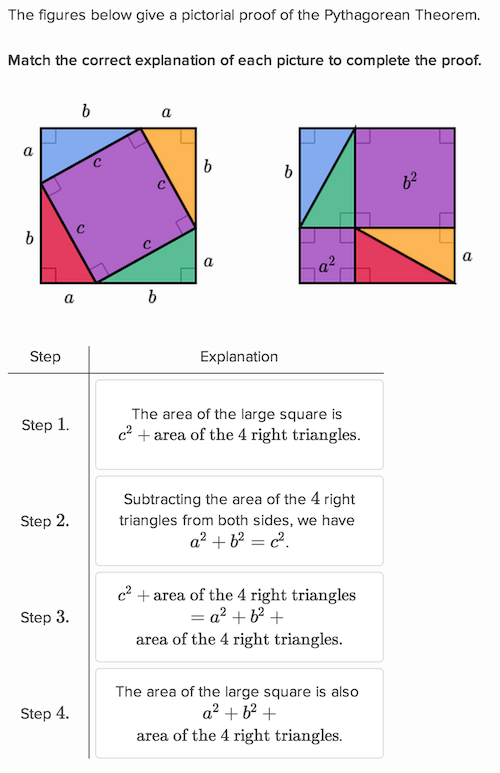 Notably, 40% of Khan Academy’s eighth-grade exercises ask students to “calculate” or “solve.” These are important mathematical actions, certainly. But as with “argumentation,” I’ll demonstrate later that this emphasis is out of alignment with current national expectations for student math learning.

The most technologically advanced items were the 20% of Khan Academy’s exercises that asked students to “construct” an object. In these items, students were asked to create lines, tables, scatterplots, polygons, angles, and other mathematical structures using novel digital tools. Subjectively, these items were a welcome reprieve from the frequent calculating and solving, nearly all of which I performed with either my computer’s calculator or with Wolfram Alpha. (Also subjective: my favorite exercise asked me to construct a line.) These items also appeared frequently in the Geometry strand where students were asked to transform polygons. 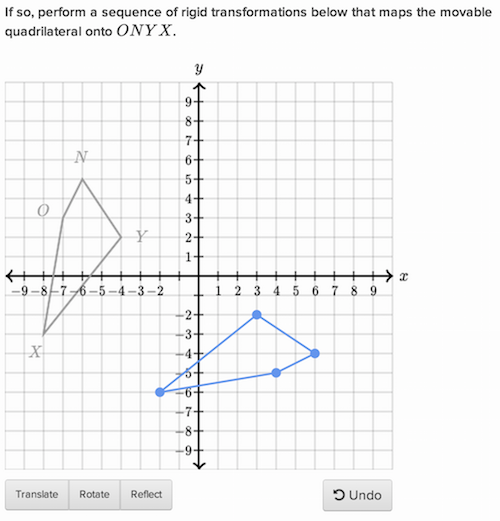 I was interested to find that the most common student action in Khan Academy’s eighth-grade year is “analyze.” Several examples follow. 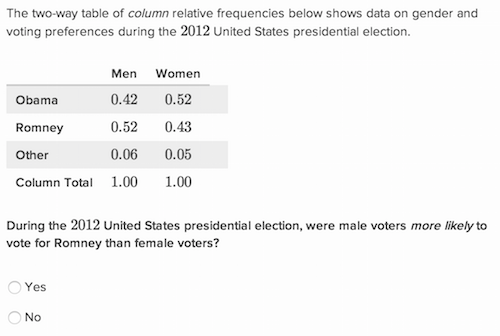 These questions of analysis are welcome but the end result of analysis can take many forms. If you think about instances in your life when you were asked to analyze, you might recall reports you’ve written or verbal summaries you’ve delivered. In Khan Academy, 92% of the analysis questions ended in a multiple-choice response. These multiple-choice items took different forms. In some cases, you could make only one choice. In others, you could make multiple choices. Regardless, we should ask ourselves if such structured responses are the most appropriate assessment of a student’s power of analysis.

Broadening our focus from the “analysis” items to the entire set of exercises reveals that 74% of the work students do in the eighth grade of Khan Academy results in either a number or a multiple-choice response. No other pair of outcomes comes close. 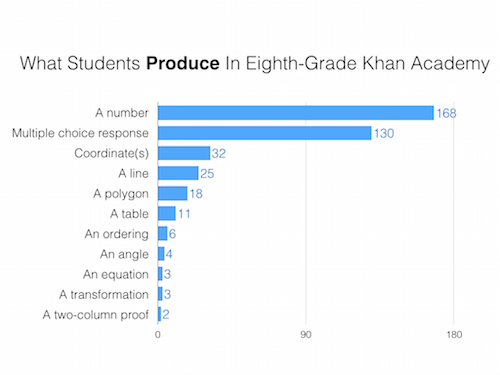 Perhaps the biggest loss here is the fact that I constructed an equation exactly three times throughout my eighth grade year in Khan Academy. Here is one:

This is troubling. In the sixth grade, students studying the Common Core State Standards make the transition from “Number and Operations” to “Expressions and Equations.” By ninth grade, the CCSS will ask those students to use equations in earnest, particularly in the Algebra, Functions, and Modeling domains. Students need preparation solving equations, of course, but if they haven’t spent ample time constructing equations also, those advanced domains will be inaccessible. 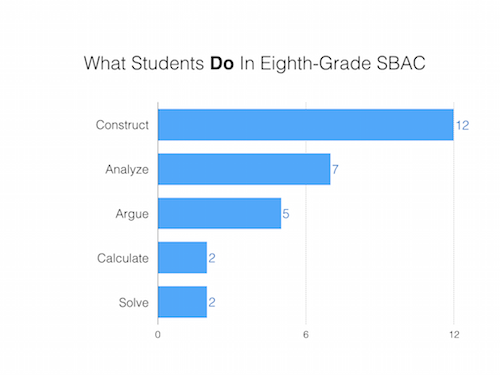 This lack of alignment is troubling. If one of Khan Academy’s goals is to prepare students for success in Common Core mathematics, they’re emphasizing the wrong set of skills.

Multiple-choice responses are also common in the Smarter Balanced assessment but the distribution of item types is broader. Students are asked to produce lots of different mathematical outputs including number lines, non-linear function graphs, probability spinners, corrections of student work, and other productions students won’t have seen in their work in Khan Academy. 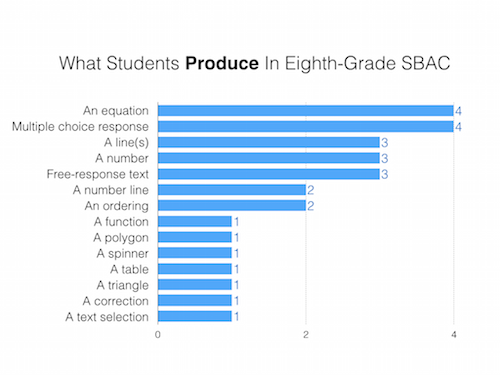 SBAC also allows for the production of free-response text while Khan Academy doesn’t. When SBAC asks students to “argue,” in a majority of cases, students express their answer by just writing an argument.

This is quite unlike Khan Academy’s three “argue” prompts which produced either a) a multiple-choice response or b) the re-arrangement of the statements and reasons in a pre-filled two-column proof.

This brief analysis has revealed that Khan Academy students are doing two primary kinds of work (analysis and calculating) and they’re expressing that work in two primary ways (as multiple-choice responses and as numbers). Meanwhile, the SBAC assessment of the CCSS emphasizes a different set of work and asks for more diverse expression of that work.

This is an important finding, if somewhat blunt. A much more comprehensive item analysis would be necessary to determine the nuanced and important differences between two problems that this analysis codes identically. Two separate “solving” problems that result in “a number,” for example, might be of very different value to a student depending on the equations being solved and whether or not a context was involved. This analysis is blind to those differences.

We should wonder why Khan Academy emphasizes this particular work. I have no inside knowledge of Khan Academy’s operations or vision. It’s possible this kind of work is a perfect realization of their vision for math education. Perhaps they are doing exactly what they set out to do.

This makes the limitations of Khan Academy’s exercises understandable but not excusable. Khan Academy is falling short of the goal of preparing students for success on assessments of the CCSS, but that’s setting the bar low. There are arguably other, more important goals than success on a standardized test. We’d like students to enjoy math class, to become flexible thinkers and capable future workers, to develop healthy conceptions of themselves as learners, and to look ahead to their next year of math class with something other than dread. Will instruction composed principally of selecting from multiple-choice responses and filling numbers into blanks achieve that goal? If your answer is no, as is mine, if that narrative sounds exceedingly grim to you also, it is up to you and me to pose a compelling counter-narrative for online math education, and then re-pose it over and over again.

What Would You Do With A $1,000 Classroom Grant?   The Twenty-Five Days of Christmas
Unless otherwise noted, everything you and I post here is licensed
for reuse under Creative Commons Attribution 4.0 International.