We Should Wish PhotoMath All The Success In The World

PhotoMath is an app that wants to do your students’ math homework for them. Its demo video was tweeted at me a dozen times yesterday and it is a trending search in the United States App Store.

In theory, you hold your cameraphone up to the math problem you want to solve. It detects the problem, solves it, and shows you the steps, so you can write them down for your math teacher who insists you always need to show your steps.

We should be so lucky. The initial reviews seem to comprise loads of people who are thrilled the app exists (“I really wish I had something like this when I was in school.”) while those who seem to have actually downloaded the app are underwhelmed. (“Didn’t work with anything I fed it.”) A glowing Yahoo Tech review includes as evidence of PhotoMath’s awesomeness this example of PhotoMath choking dramatically on a simple problem. 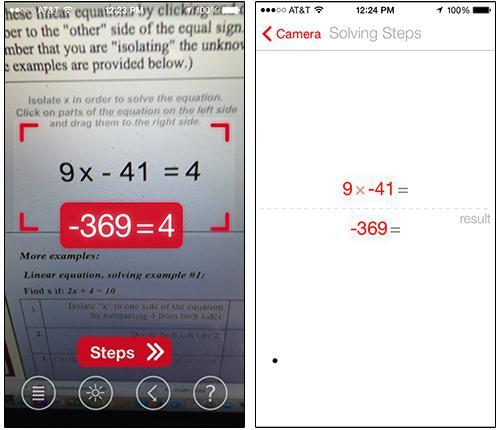 But we should wish PhotoMath abundant success — perfect character recognition and downloads on every student’s smartphone. Because the only problems PhotoMath could conceivably solve are the ones that are boring and over-represented in our math textbooks.

It’s conceivable PhotoMath could be great for problems with verbs like “compute,” “solve,” and “evaluate.” In some alternate universe where technology didn’t disappoint and PhotoMath worked perfectly, all the most fun verbs would then be left behind: “justify,” “argue,” “model,” “generalize,” “estimate,” “construct,” etc. In that alternate universe, we could quickly evaluate the value of our assignments:

“Could PhotoMath solve this? Then why are we wasting our time?”

2014 Oct 22. Glenn Waddell seizes this moment to write an open letter to his math department.

2014 Oct 27. Jim Pai asked some teachers and students to download and use PhotoMath. Then he surveyed their thoughts.

Kathy Henderson gets the app to recognize a problem but its solution is mystifying:

I find this one of the most convoluted methods to solve this problem! I may show my seventh graders some screen shots from the app tomorrow and ask them what they think of this solution — a teachable moment from a poorly written app!

I we are structuring this the right way, kids (a) won’t use the app when developing the concept, (b) have a degree of comfort with doing it themselves after developing the concept and (c) take the app out when they end up with something crazy like -16t2+400t+987=0, and factoring/solving by hand would take forever.

The point in this case isn’t how well the character recognition is. Or how correct the solutions are. Because it’s just a matter of time before apps like these solve handwritten algebra problems perfectly in seconds, providing a clear description of all steps taken.

The point is: who provides the equation to be solved by the app? I have never seen an algebraic equation that presented itself miraculously to me in daily life.

ps. Photomath is just a “stupid pet trick” they did to market their recognition engine.

[Confab] Mind Reading & Math   Why Students Hate Word Problems
Unless otherwise noted, everything you and I post here is licensed
for reuse under Creative Commons Attribution 4.0 International.