In my modeling workshops this summer, we first modeled the money duck, asking ourselves, what would be a fair price for some money buried inside a soap shaped like a duck? We learned how to use the probability distribution model and define its expected value. We developed the question of expected value before answering it.

Then the blogosphere’s intrepid Clayton Edwards extracted an answer from the manufacturers of the duck, which gave us all some resolution. For every lot of 300 ducks, the Virginia Candle Company includes one $50, one $20, one $10, one $5, and the rest are all $1. That’s an expected value of $1.27, netting them a neat $9.72 profit per duck on average. 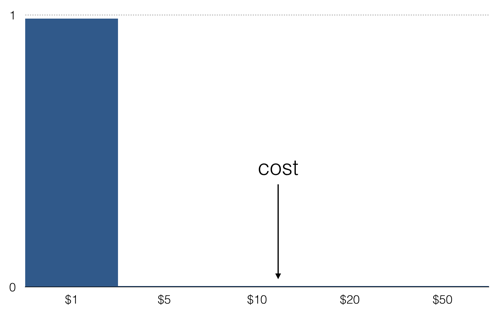 They’re only able to get away with that distribution because competition in the animal-shaped cash-containing soap marketplace is pretty thin.

So after developing the question and answering the question, we then extended the question. I had every group decide on a) an animal, b) a distribution of cash, c) a price, and put all that on the front wall of the classroom — our marketplace. They submitted all of that information into a Google form also, along with their rationale for their distribution. 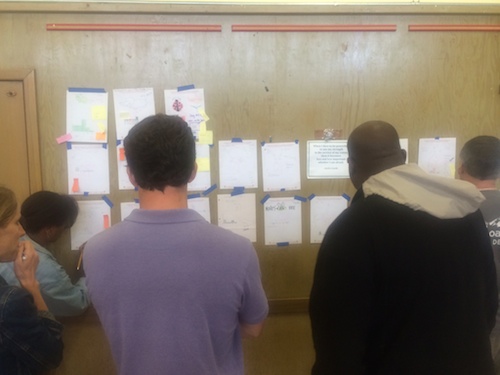 Then I told everybody they could buy any three animals they wanted. Or they could buy the same animal three times. (They couldn’t buy their own animals, though.) They wrote their names on each sheet to signal their purchase. Then they added that information to another Google form.

Given enough time, customers could presumably calculate the expected values of every product in the marketplace and make really informed decisions. But I only allowed a few minutes for the purchasing phase. This forced everyone to judge the distribution against price on the level of intuition only.

During the production and marketing phase, people were practicing with a purpose. Groups tweaked their probability distributions and recalculated expected value over and over again. The creativity of some groups blew my hair back. This one sticks out: 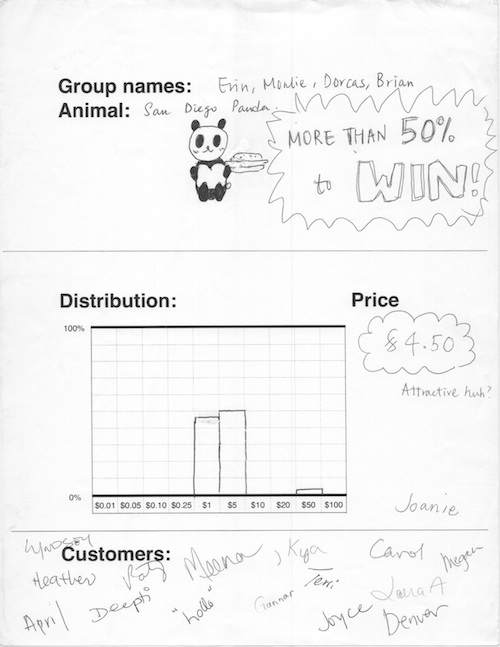 Look at the price! Look at the distribution! You’ll walk away a winner over half the time, a fact that their marketing department makes sure you don’t miss. And yet their expected profit is positive. Over time, they’ll bleed you dry. Sneaky Panda!

I took both spreadsheets and carved them up. Here is a graph of the number of customers a store had against how much they marked up their animal. 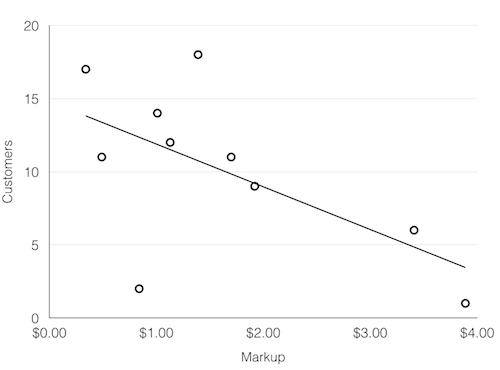 Look at that downward trend! Even though customers didn’t have enough time to calculate markup exactly, their intuition guided them fairly well. Question here: which point would you most like to be? (Realization here: a store’s profit is the area of the rectangle formed around the diagonal that runs from the origin to the store’s point. Sick.)

So in the mathematical world, because all the businesses had given themselves positive expected profit, the customers could all expect negative profit. The best purchase was no purchase. Javier won by losing the least. He was down only $1.17 all told.

But in the real world, chance plays its hand also. I asked Twitter to help me rig up a simulator (thanks, Ben Hicks) and we found the actual profit. Deborah walked away with $8.52 because she hit an outside chance just right. 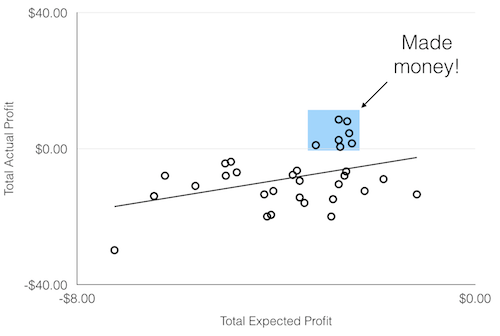 Profit Penguin was the winning store for both expected and actual profit. 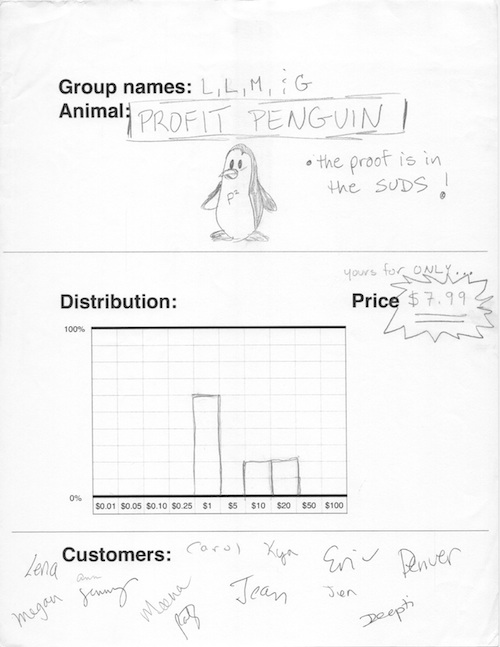 Keep the concept simple and make winning $10s and $20s fairly regular to entice buyers. All bills — coins are for babies!

We’ve talked already about developing the question and answering the question. Daniel Willingham writes that we spend too little time on the former and too much time rushing to the latter. I illustrated those two phases previously. We could reasonably call this post: extending the question.

To extend a question, I find it generally helpful to a) flip a question around, swapping the knowns and unknowns, and b) ask students to create a question. I just hadn’t expected the combination of the two approaches to bear so much fruit.

I’ve probably left a lot of territory unexplored here. If you teach stats, you should double-team this one with the economics teacher and let me know how it goes.

Five Reasons To Download Classkick   Answer Getting & Resource Finding
Unless otherwise noted, everything you and I post here is licensed
for reuse under Creative Commons Attribution 4.0 International.