tl;dr — “Real world” is tougher to measure than “interest” and less important overall. So rather than asking which of these three different versions of a word problem is more “real world” I asked a couple hundred people which is more interesting. Only the geometry treatment was significantly better than a coin flip at generating questions.

Here are some closing words about “real world” math, mostly distilled from your comments on the last post. As with previous investigations, I am indebted to the folks who stop by this blog to comment and make me smarter.

Real-World Math Is Hard To Define

What other conclusion can we draw from the dozen-or-so definitions of “real-world math” I found here and on Twitter? 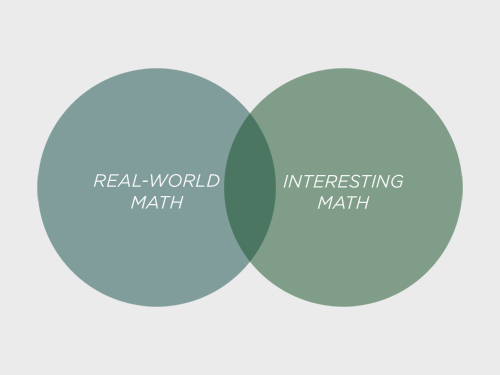 David Taub argued the whole question confused “interest” with “real world.” M Ruppel listed other criteria for judging the value of a question, one of which was “kids want to solve it.”

Their arguments may seem obvious to you. They aren’t obvious to the three people who emailed me here or these presenters at the California STEM Symposium or Conrad Wolfram or the New York Times editorial board.

As Liz said, “Real world is just a means to an end. The goal is interest.” We should reject simple explanations of student interest.

So Which Version Is More Interesting?

Asking which of these three versions (candy, geometry, text) of the same math problem is more “real-world” was a pointless task since basically everyone has a different definition of “real-world” and it doesn’t guarantee interest anyway

So let’s ask about interest instead.

I used Mechanical Turk (and Evan Weinberg’s invaluable Internet skills) to show a random version of the problem to 99 people. I asked them if they had a question or not.

Of the three treatments, only the geometry treatment was statistically better than a coin flip at generating questions. (Here’s the experiment and the data.)

Then I showed another 80 people the same three treatments and asked how interested they were in the equal area question as measured on a Likert scale from -3 to 3, including 0. (This measured interest another way. Perhaps a question didn’t occur to you impulsively but once you heard it you were interested in it.)

Here again only the geometry treatment had an interest rating that was significantly different from “neutral.” (Experiment and data.)

Why the geometry treatment? I don’t know. It’s more abstract than the candy treatment, which features objects from outside the math classroom. 88% of the people I surveyed in the first experiment answered “within the last year” to the question “When did you last use math to solve a problem in life, work, or school?” That’s a math-friendly crowd. It’s possible that a class of elementary schoolers would find the candy treatment more interesting and that a coffee klatch of research mathematicians would tend towards the text treatment.

I don’t know. I’m just speculating here that real world is a pretty porous category. And for the sake of interesting your students in mathematics, it’s more important to know their world.

The SRI Report On Khan Academy: Helpful, Not Transformational   Dear Mathalicious: Which Of These Questions Is “Real World”?
Unless otherwise noted, everything you and I post here is licensed
for reuse under Creative Commons Attribution 4.0 International.