I’ve heard dozens of variations on that recommendation in my task design workshops. I heard it at Twitter Math Camp this summer. That statement measures tasks along one axis only: the realness of the world of the problem.

But teachers report time and again that these tasks don’t measurably move the needle on student engagement in challenging mathematics. They’re real world, so students are disarmed of their usual question, “When will I ever use this?” But the questions are still boring.

That’s because there is a second axis we focus on less. That axis looks at work. It looks at what students do.

That work can be real or fake also. The fake work is narrowly focused on precise, abstract, formal calculation. It’s necessary but it interests students less. It interests the world less also. Real work — interesting work, the sort of work students might like to do later in life — involves problem formulation and question development. 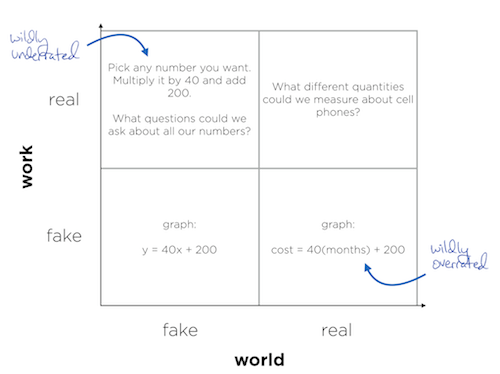 BTW. I really dislike the term “real,” which is subjective beyond all belief. (eg. What’s “real” to a thirty-year-old white male math teacher and what’s real to his students often don’t correlate at all.) Feel free to swap in “concrete” and “abstract” in place of “real” and “fake.”

@ddmeyer @mpershan my kids working with http://t.co/ig98dLeSGS are doing real work, fake world, and loving it.

I would add that tasks in the bottom-right quadrant, those designed with a “SIMS world” premise, provide less transfer to the abstract than teachers hope during the lesson design process. This becomes counter-productive when a seemingly “progressive” lesson doesn’t produce the intended result on tests, then we go back not only to square 1, but square -5.

I love this distinction between real world and real work, but I wonder about methods for incorporating feedback into real work problems. In my experience, students continue to look at most problems as “fake” so long as they depend on the teacher (or an answer key or even other students) to let them know which answers are better than others. We like to use tasks such as “Write algebraic functions for the percent intensity of red and green light, r=f(t) and g=f(t), to make the on-screen color box change smoothly from black to bright yellow in 10 seconds.” Adding the direct, immediate feedback of watching the colors change makes the task much more real and motivating.

Can Sports Save Math?   Five Reasons To Download Classkick
Unless otherwise noted, everything you and I post here is licensed
for reuse under Creative Commons Attribution 4.0 International.