Let’s look at an example of developing the question versus rushing to the answer.

First, a video I made with the help of some workshop friends at Eanes ISD. They provided the video. I provided the tracking dots.

To develop the question you could do several things your textbook likely won’t. You could pause the video before the bicycle fades in and ask your students, “What do you think these points represent? Where are we?”

Once they see the bike you could then ask them to rank the dots from fastest to slowest.

It will likely be uncontroversial that A is the fastest. B and C are a bit of a mystery, though, loudly asking the question, “What do we mean by ‘fast’ anyway?” And D is a wild card.

I’m not looking for students to correctly invent the concepts of angular and linear velocity. They’ll likely need our help! I just need them to spend some time looking at the deep structure in these contrasting cases. That’ll prepare them for whatever explanation of linear versus angular velocity follows. The controversy will generate interest in that explanation.

Compare that to “rushing to the answer”: 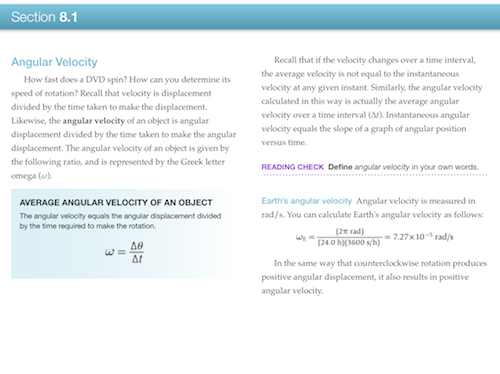 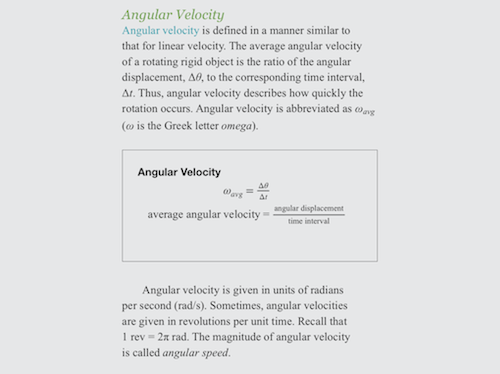 How are you supposed to have a productive conversation about angular velocity without a) seeing motion or b) experiencing conflict?

See, we originally came up with these two different definitions of velocity (linear and angular) in order to resolve a conflict. We’ve lost that conflict in these textbook excerpts. They fail to develop the question and instead rush straight to the answer.

BTW. Would you do us all a favor? Show that video to your students and ask them to fill out this survey.

Let’s see what they say.

Bob Lochel, with a great activity that helps students feel the difference between angular and linear velocity:

I keep telling myself that I would love to try this activity with 50 kids on the football field, or even have kids consider the speed needed to make it happen.

Without some physical activity, some sense of the motion and what it is that is actually changing, then the problems become nothing more than plug and chug experiences.

The Scary Side Of Immediate Feedback   Developing The Question: Ask For A Sketch First, Ctd.
Unless otherwise noted, everything you and I post here is licensed
for reuse under Creative Commons Attribution 4.0 International.