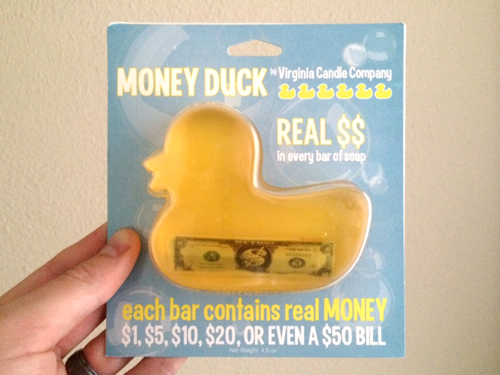 My sense is this is an object with a lot of potential for a math teacher. I’d like to know how you’d harness that potential.

A particular question I’m wrestling with is whether or not to put the student in the position of:

Over the next few days I’ll update this post with comments I’ve solicited in advance from some of my favorite curriculum designers. I’d love to add your thoughts to the pile.

Being sellers, students could do a lot with cost analysis given production constraints.

Thinking about it, I would position the student as the seller of the money duck for two main reasons. Ultimately, knowledge of the quantities of each denomination would be needed by both the seller and buyer. Unfortunately, the buyer would most likely never have access to that information (since I assume that it is not like a lottery where they divulge the odds of winning) and would have to guess whereas the seller could reasonably have that information.

I think that the seller’s situation is much more manageable. We can have Act Two information to determine the profit and production cost. The math will come from determining the cost of the “real money.” As for the buyer, there are many assumptions that will not fall as conveniently into Act 2. There may be disagreement as to what a buyer would pay for soap, the novelty cost, and profit margins. Accordingly, I think it is much easier to do the seller situation.

My favorite question here would be to set a price for the duck and ask the seller’s question, what distribution should I use for the bills? But only after the kids have determined that an equal distribution is profitable for the buyer.

My thought is that the kids will gravitate to the “Should I buy it” question, and the real learning comes from shifting them around to the sellers side of the problem.

I’d set up many sets of two types of groups, producers (sellers) and consumers (buyers). The producers would determine what distribution of the bills (ha) go in the ducks and then set a price based on that info. They make up 20 “ducks” with their distribution. The consumers would go up to a producer and be given the odds of each type of bill and the price of the duck. It’d be up to them if they’d like to buy that groups ducks.

how about using the money duck to construct a survey. Survey students as to what odds (probability) of winning any prize would encourage them to muy multiple money ducks.

I presented the Money Duck to my grade 4/5 class this morning with the question: “What is the most that you would pay for a Money Duck bar of soap?” Group conversations were animated as was the class discussion.

Questions that students raised included: “How likely would it be for the package to have 10, 20 or 50 dollars?”, “Is the money planted in the middle of the soap? If so, would someone break the soap to get at the money?” [in which case the soap didn’t matter at all in the pricing] and “What is the quality of the soap?” [If it was a good quality soap many were willing to pay more]. Some students started taking the seller’s point of view and gave ideas how they could increase profits.

The discussion lasted nearly half an hour. Incidentally, the average price the students were willing to pay was $5. (Figuring that the soap itself was worth 3 or 4 dollars, and then factoring in the minimum prize of 1 dollar).

Clearly this idea has potential at multiple grade levels.

How many money ducks would I have to buy to be guaranteed to score at least one duck with a $50 bill inside?

From what I’ve heard, nearly all of the ducks are $1 ducks. It’s like buying a lottery ticket – you expect to lose, but it can be fun for some people anyway.

Bit from an Amazon review of a different money soap:

“I used to work at a warehouse for online gag gifts until it went out of business I had four boxes of these prob 200 bars or so and never got more than a five.”

I think legally they only need to have one duck in the entire country that has a $50 in it to claim there could be a $50, so that’s likely your odds.

Ask students to tell their neighbor how much they’d be willing to pay for the Money Duck. Find the high and low in the class.

Now there are a series of questions I’d like students to confront, including:

I’m trying to progressively formalize a) this new, strange representation of probability and b) the calculation of expected value.

The first two questions assist (a), basically asking “What is this thing?” and “What isn’t this thing?”

The next three questions assist (b), applying progressively more nuance to the concept of expected value. First, the concept is either/or. (“Who gets screwed?”) Then it becomes ordinal. (“Rank ’em.”) Then numerical. (“Put a price on ’em.”)

Here are those questions and screens packaged as a Keynote slideshow (also PowerPoint, if you must) and as a handout.

Now let’s show them the answer, what the Virginia Candle Company actually charges for the Money Duck.

Now every student should create a distribution that results in some profit at this price over time.

What would you change, add, or subtract from this sequence?

[3ACTS] Money Duck   Speaking To New Teachers At Their Graduation
Unless otherwise noted, everything you and I post here is licensed
for reuse under Creative Commons Attribution 4.0 International.