As a showcase entry we spent several lessons developing the Maths of perspective drawings of representations of comparisons between Australia and the mission countries- income, death rates, life expectancy etc, and finished by creating chalk drawings around the school for all to see.

Malke Rosenfeld assigned the Hundred-Face Challenge — make a face using Cuisenaire Rods that up to 100 — and you should really click through to her gallery of student work:

Some kids just made awesome faces. Me: “Hmmm…that looks like it’s more than 100. What are you going to do?” Kid: “I guess we’ll take off the hair.”

One of my favorite aspects of Bob Lochel’s statistics blogging is how cannily he turns his students into interesting data sets for their own analysis:

Both classes gave me strange looks. But with instructions to answer as best they could, the students played along and provided data. Did you note the subtle differences between the two question sets?

Jonathan Claydon shows us how to cobble together a document camera using nothing more than a top of the line Mac and iPad.

“You have to create the itch before you scratch it.”

Malcolm Swan, on how to begin a lesson:

Every lesson should begin by getting [students] to articulate something about what they already understand or know about something or their initial ideas. So you try and uncover where they’re starting from and make that explicit. And then when they start working on an activity, you try to confront them with things that really make them stop.

And it might be that you can do this by sitting kids together if they’ve got opposing points of views. So you get conflict between students as well as within. So you get the conflict which comes within, when you say, “I believe this, but I get that and they don’t agree.” Or you get conflict between students when they just have fundamental disagreements, when there’s a really nice mathematical argument going on. And they really do want to know and have it resolved. And the teacher’s role is to try to build a bit of tension, if you like, to try and get them to reason their way through it.

And I find the more students reason and engage like that then they can get quite emotional. But when they get through it, they remember the stuff really well. So it’s worth it.

Awesome Internetting from the last month.

I attended the California Math Council’s annual conference in Palm Springs last week along with nearly 3,600 other attendees. I presented a session there along with nearly 240 other presenters. At the end of our sessions, attendees could use PollEverywhere to send in their responses to three statements:

Attendees scored each statement on a scale from 0 (disagree!) to 3 (agree!). Attendees could also leave written feedback.

At the end of the conference, presenters were sent to a public site where they could access not just their own session feedback, but the feedback for other presenters also. This link started circulating on Twitter. I scraped the feedback from every single session and analyzed all the data.

This is my intention:

This isn’t my intention:

There were 2,972 total feedback messages. 2,615 were correctly formatted. With 3,600 attendees attending a maximum of eight sessions, that’s 28,800 feedback messages that could have been sent, for a response rate of about 10%.

How Much Feedback Did You Get? 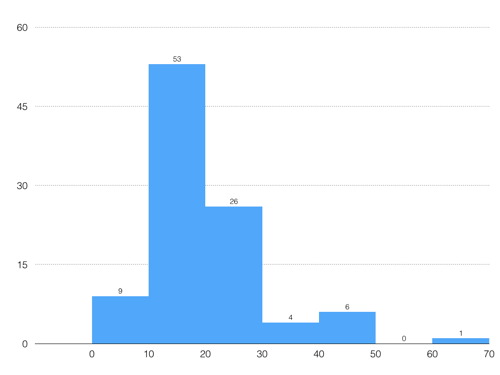 Most presenters received between 10 and 20 feedback messages. One presenter received 64 messages, though that was across several sessions.

How Did You Do On Each Of The Survey Questions? 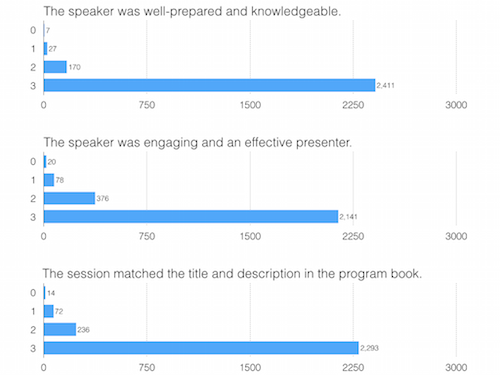 Overall the feedback is incredibly positive. I’m very curious how this distribution compares to other math education conferences. I attend a lot of them and Palm Springs is on the top shelf. California has a deep bench of talented math educators and Palm Springs is a great location which draws in great presenters from around the country. I’d put it on par with the NCTM regionals. Still, this feedback is surprisingly sunny.

The data also seem to indicate that attendees were more likely to critique the presenters’ speaking skills (statement #2) than their qualifications (statement #1).

How Did You Do On A Lousy Measure Of Overall Quality?

For each presenter, I averaged the responses they received for each of the survey questions and then summed those averages. This measure is problematic for loads of reasons, but more useful than useless I think. It runs from 0 to 9. 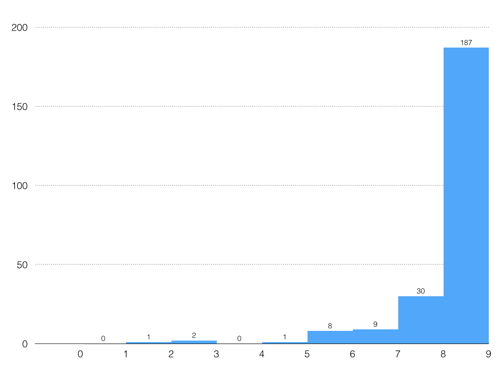 62 presenters received perfect scores from all their attendees on all measures. 132 more scored above an 8.0. Even granting the lousiness of the measure, it points to a very well-liked set of presenters.

So why didn’t people like your session? The following quotes are all verbatim.

What People Said When You Weren’t “Well-Prepared Or Knowledgeable.”

What People Said When You Weren’t “An Engaging Or Effective Presenter.”

What People Said When Your Session “Didn’t Match The Title And Description In The Program Book.”

You were selling a product. (I looked up all of these session descriptions. None of them disclosed the commercial nature of their sessions.)

You claimed the wrong grade band.

You didn’t connect your talk closely enough to the CCSS.

People Whose Sessions Were Said to Be the “Best of the Conference!”

23-way tie! Perhaps useful for your future conference planning, however.

The revelations about technology and hands-on math work interest me most.

In my sessions, I like to do math with participants and then talk about the math we did. Too much doing, however, and participants seem to wonder why the person at the front of the room is even there. That’s a tricky line to locate.

I would also like to present on the technology I use that makes teaching and learning more fun for me and students. But it seems rather difficult to create a presentation that differentiates for the range of abilities we find at these conferences.

The session feedback here has been extremely valuable for my development as a presenter and I only hope the conference committee finds it equally useful for their purposes. Conference committee chair Brian Shay told me via email, “Historically, we use the data and comments to guide our decision-making process. If we see speakers with low reviews, we don’t always accept their proposal for next year.”

Great, if true. Given the skew of the feedback towards “SUPER LIKE!” it seems the feedback would be most useful for scrutinizing poor presenters, not locating great ones. The strongest negative feedback I found was in reaction to unprepared presenters and presentations that were covertly commercial.

CMC has the chance to initiate a positive feedback loop here by taking these data seriously in their choices for the 2015 conference and making sure attendees know their feedback counted. More and more thoughtful feedback from attendees will result.

I forgot to tell the attendees at my session my PollEverywhere code. Some people still sent in reviews. My practice is to post my most recent twelve months of speaking feedback publicly.

2014 Nov 4. It seems I’ve analyzed an incomplete data set. The JSON file I downloaded for one presenter (and likely others) contains fewer responses than he actually received. I don’t have any reason to believe there is systematic bias to which responses were included and excluded but it’s worth mentioning this caveat.