tl;dr. I made another digital math lesson in collaboration with Christopher Danielson and our friends at Desmos. It’s called Central Park and you should check out the Walkthrough.

Here are two large problems with the transition from arithmetic to algebra:

We give students variable expressions like the exponential one above, which they had no hand in developing, and ask them to evaluate the expression with a number. The student says, “Ohhh-kay,” and might do it but she doesn’t know what pianos have to do with exponential equations nor does she know where any of those parameters came from. She may regard the whole experience as one of those nonsensical rites of school math which she’ll forget about as soon as she’s legally allowed.

In school, using variables is harder than using arithmetic. But what does that difficulty buy us, except a grade and our teacher’s approval? Meanwhile, in the world, variables are responsible for anything powerful you have ever done with a computer.

Students should experience some of that power.

Our attempt at solving both of those problems is Central Park. It proceeds in three phases. 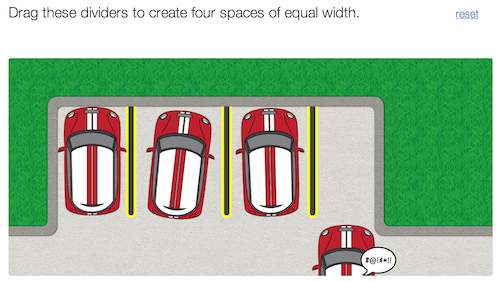 We ask the students to drag parking lines into a lot to make four even spaces. Students have no trouble stepping over this bar. We are making sure the main task makes sense. 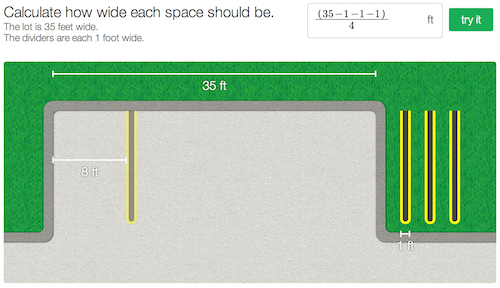 We transition to calculation by asking the students “What measurements would you need to figure out the exact space between the dividers?” This question prepares them to use the numbers we give them next.

This will be very helpful as we take the next big leap.

We give students numbers and variables. They can calculate the space width arithmetically again but it’ll only work for one lot. When they make the leap to variable equations, it works for all of them. 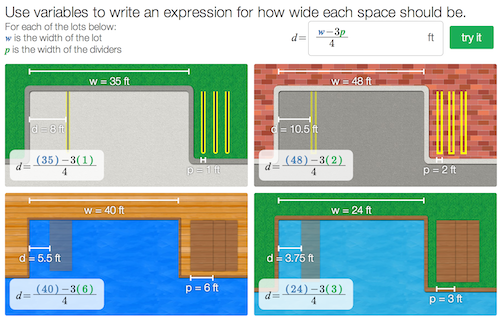 It works for sixteen lots at once. 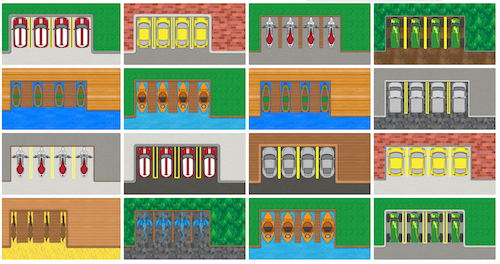 2014 Jul 28. Here is Christopher Danielson’s post about Central Park on the Desmos blog.

In thinking further about your complaint about â€œWrite an expressionâ€ I think what is also going on in this app is a NEEDED slowing down of the learning process. The text (and too many teachers) are quick to jump to algorithms before the students understands their nature and value. Look how long it takes to get to the concept of an appropriate expression in the app: you build to it slowly and carefully. I think this is at the heart of the kind of induction needed for genuine understanding, where the learner is helped, by scaffolding, to draw thoughtful and evidence-based conclusions; test them in a transfer setting; and learn from the feedback â€“ i.e. the essence of what we argue understanding is in UbD.

One reason I like this activity so much is that it hits the sweet spot where â€œWhat can you do with it?â€ and â€œWhat does it mean?â€ overlap.

“I would eat the extra meatball.”

In one case, a teacher was teaching a lesson about division with remainders and the example was packaging meatballs in pack of 4. When faced with the problem of having 13 meatballs and needing 4 per pack, one student’s solution was “I would eat the extra meatball and then they would all fit.” It was so funny and joyful to see that all thinking was welcomed and the teacher artfully led them to the general thinking that she wanted by the end of the lesson.

I can trace my development as a teacher through the different reactions I would have had to “I would eat the extra meatball,” from panic through irritation to some kind of bemusement.

BTW. The comments here have been on another level lately, team, including Simon’s, so thanks for that. I’ve lifted a bunch of them into the main posts of Rand Paul Fixes Calculus and These Tragic â€œWrite An Expressionâ€ Problems. 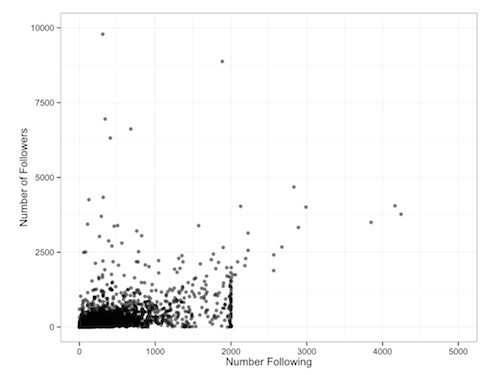 Two quick meta-items about blogging from the last week:

If you have one person in the country who is, like, the best at explaining calculus, that person maybe should teach every calculus class in the country.

It’d be helpful if we could work through the idea that good teaching is just good explaining and vice versa. Someone here at Twitter Math Camp mentioned she conducts a math night for parents at the start of school. “I wish I had learned math like this as a kid,” they tell her. That realization, that there is and should be a difference between how math was taught then and now, is a giant first step.

This shows the idea that childrenâ€™s minds are empty vessels that need to be filled with knowledge and teachers are the keepers of that knowledge, whose sole job is to effectively pour said knowledge into the vessel. And if their minds didnâ€™t get filled with our knowledge the fault must lie with our explanations.

This flies in the face of what we know about teaching and learning.

None of these reforms about math education can happen in a vacuum. Thereâ€™s always a political side to what happens to peopleâ€™s children, and if the way you help children learn math is important then the way you communicate with parents is also important.

We need to do something about these problems, which recur all throughout school Algebra.

The original title of this post called them “horrible,” but they’re truly “tragic” â€“ the math education equal to Julius Caesar, Othello, and Hamlet â€“ full of potential but overwhelmed by their nature.

Here’s the thing about variable expressions: they’re used by programmers and students both, but those two groups hold variables in very different regard.

What can we do?

The moral of this story isn’t “teach Algebra 1 through programming” or “teach computational thinking.” At least I don’t think so. I’ve been down that road and it’s winding.

But in some way, however small, we should draw closer together the wildly diverging opinions students and programmers have about variables. Ideas? I’ll offer one on Monday.

2014 Jul 25. I appreciate how Evan Weinberg has thought through this makeover (now and earlier).

Dylan Kane restates our task here in a useful way:

In terms of making these problems a little better, students should feel a need for the expression. I think this question stinks in part because the expression itâ€™s asking for is so trivial â€” itâ€™s extra work, compared to just multiplying by 3/4 or doing some simple proportional thinking.

Jennifer offers an example of that kind of need:

I like to introduce the idea of expressions by having the students playing the game of 31 with a deck of cards!their goal- play until they can predict how they can win every time! This will take less than 15 minutes, and a whole class summary of verbal descriptions on â€˜how to winâ€™ are shared. Verbal descriptions become cumbersome to write on the board, so â€˜shorthandâ€™ in the form of clearly named and defined symbols are used to make the summarising more efficient. the beauty of this is that the idea of equivalent expressions presents itself.

i think the ability to generalize and write a rule with variables is really important, but you can come to that through lots of nice activities and investigations as well.

for example, i did danâ€™s â€œtaco cartâ€ with my students with a few notable changes. instead of telling the students how fast dan and ben walked, i had each group decide on the speed of the two men themselves and list that along with other assumptions they made in the problem.

when we did the whole class summary, i told them that i had written down a formula on my paper that would allow me to check if their answers were correct and that i needed that since everyone used their own speed. i shouldâ€™ve asked them all to take a minute to try to come up with the formula i used, but instead i elicited it at that moment and one student gave me the correct formula. the need for two variables (speed on sand and speed on pavement) was obvious.

in part two of taco cart, when the students were trying to figure out where the taco cart should be so that the two men reached it at the same time, one group did seemingly endless guess and checks. i suggested to them that this wasnâ€™t a good method and asked if maybe it wasnâ€™t better to write an equation with a variable. again, they could see the need. once they started with a variable, the rest of the problem started to fall into place.

hereâ€™s the thing: these â€œwrite an expressionâ€ problem want to train students to learn to generalize and write a rule. they want them to be able to see a situation that would best be tackled with a formula of some sort, write said formula with various variables, and use their formula to solve complex problems. but the issue is that these problems donâ€™t actually train students in that way because theyâ€™re so artificial and one-dimensional. what they do is teach students to â€œtranslateâ€ from english to math (an important step along the way, i do believe), but not to recognize a situation in which a formula would be helpful or necessary or how powerful it can be.

Two thoughts from a computer science teacherâ€™s point of view:
1) When introducing programming to 15 yrs olds for the first time, we use Python interactive prompt as a calculator first. And the first point is to show the advantages. Variables and funstions (one-liner formulas) simply save work. That is it, that is one of the goals of the whole programming topic anyway. When they do quadratic equations in maths at that time, we are headed that way. And students realize pretty fast: aha, I have to understand how to solve them, but once I do and I describe it properly, I never have to do it by hand anymore. Their understanding of q.e. deepened, they interest in programming increased, and I could naturally introduce a load of important CS concepts on the way. In younger age we do simpler formulas, also like BMI calculation (not only the â€œarea of the circleâ€ kind of stuff, which they, um, do not prefer), but the point is the same: the kids need to see at least some hypothetical benefit for themselves. Having to introduce variables in maths, I would in principle search for a similar approach. (Note: for even younger kids, fun and creativity achieved with Scratch, turtle etc. overweigh the â€œpractical benefitsâ€; but when practicality leads to more fun â€“ win-win!).

2) A good and often forgotten tool between calculation on paper and programming is a spreadsheet. It can store lots of numbers in a structured way and perform basic calculations, what is well understood by kids. And when we want to do anything more complex without getting beards grown, we absolutely need formulas and â€œvariablesâ€. Their advantages are imminent. And the whole time, everything is in plain sight, the level of abstraction is way lower than with programming, making it very accessible for kids. I am of course interested in it â€œfrom the other sideâ€ â€“ after some decent work in spreadsheets, many more advanced concepts are a step away (for-loop, data type, input-output, function, incremental work on more complicated calculations, debugging etc. etc.). But I believe that thoughtful use of spreadsheets can improve understanding in appropriate topics in maths.