Many, many thanks to everyone who helped me sort out some thoughts on this lesson in our previous confab post, including but not limited to Fawn Nguyen, Robert Kaplinsky, Bowen Kerins, Dan Anderson, and Max Ray, and the many participants I pestered at OAME2014 this last week.

Ask: “What would be a fair price for the Money Duck?”

You guys were right. In the end it makes more sense to pose the student as the seller. It’s more productive and more interesting even though its easier to empathize with the buyer initially.

Ask: “What information would you need to decide on a fair price?” 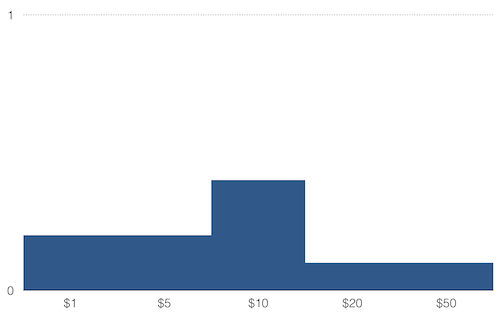 It’s unusual so we’re going to do several things in order:

After laying all this informal groundwork, we’re ready to transition from qualitative descriptions to numerical and define expected value.

There’s no act three here. We don’t know the probability distribution of the Money Duck (I asked) so we can’t validate. That’s okay.

Let’s show the students the actual price of the Money Duck and ask them to determine a probability distribution that would give them a $3 profit per Money Duck as a seller. Answers, happily, can vary.

BTW. The bummer-world version of this problem reads like this:

A carnival game is played as follows: You pay $2 to draw a card from an ordinary deck of 52 playing cards. If you draw an ace, you win $5. You win $3 if you draw a face card (Jack, Queen, King) and $10 if you draw the seven of spades. If you pick anything else, you lose your $2. On average, how much money can the operater expect to make per customer?

2014 May 12. You should definitely read Dan Anderson’s experience running this lesson with students.

2014 May 19. Also, Megan Schmidt had some interesting results with students particularly w/r/t the question, “Which distributions are impossible?”