Painted Cubes is a classic task, canonized right alongside the Pool Border task and Barbie Bungee, but that doesn’t mean it’s beyond help, or that everyone treats it exactly the same way.

Here’s a treatment from Connected Mathematics. What would you do with this and why would you do it? (Click for larger.) 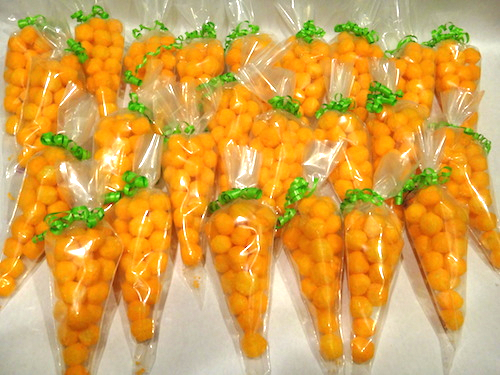 Christina Tondevold teaches her first three-act math task. There’s a lovely and surprising result at the end, when her students realize that with modeling the calculated answer doesn’t always match the world’s answer exactly.

After they all had taken the 24 bags x 26 in each bag, every kid in that room was so confident and proud that they had gotten the answer of 624, however … the answer is not 624! Why do you think our answers might be off?

Roll five dice to get ingredients for your burger. The numbers correspond to how many mm tall each part is.

Matthew Jones creates a Would You Rather? activity and one of his “defiant” students makes an effective justification of a counterintuitive choice:

Jennifer Wilson describes one of NCSM’s “Great Tasks” and shows how she gathers and sorts student work with a TI-NSpire.

Students are asked to create a fair method for cutting any triangular pizza into 3 equal-sized pieces of pizzas. I asked students to work alone for a few minutes before they started sharing what they were doing with others on their team. I walked around and watched.

Adaptive Learning Is An Infinite iPod That Only Plays Neil Diamond

I was in a small room recently with some futurists who were very excited about adaptive learning. The reasons for their excitement wouldn’t surprise you. “Prussian factory model of learning, learn at your own pace, et cetera.” I admit it all sounded very appealing and when I tried to articulate my frustration with their model, I didn’t get far at all. I sounded like just another rent-seeking teacher trying to preserve the outdated model that cuts his paycheck.

Futurists and math educators talk past each other. If I could jump into any futurist’s head and encode any particular understanding there to make dialog easier, it would be this:

Adaptive learning is like an iPod with infinite capacity and infinite capability to play any song ever recorded or sung, provided those songs were written by Neil Diamond.

If all you’ve ever heard in your life is Neil Diamond’s music, you might think we’ve invented something quite amazing there. Your iPod contains the entire universe of music. If you’ve heard any other music at all, you might still be impressed by this infinite iPod. Neil wrote a lot of music after all, some of it good. But you’ll know we’re missing out on quite a lot also.

So it is with the futurists, many of whom have never been in a class where math was anything but watching someone lecture about a procedure and then replicating that procedure twenty times on a piece of paper. That entire universe fits neatly within a computer-adaptive model of learning.

But for math educators who have experienced math as a social process where students conjecture and argue with each other about their conjectures, where one student’s messy handwritten work offers another student a revelation about her own work, a process which by definition can’t be individualized or self-paced, computer-adaptive mathematics starts to seem rather limited.

Lectures and procedural fluency are an important aspect of a student’s mathematics education but they are to the universe of math experiences as Neil Diamond is to all the other amazing artists who aren’t Neil Diamond.

If I could somehow convince the futurists to see math the same way, I imagine our conversations would become a lot more productive.

Can I offer another analogy for these technologists? Adaptive learning is like a guitar teacher who teaches you how to play harder and harder pieces of music but never teaches you how to improvise. So you can play a piece of music that is placed in front of you, but you’ll never be able to pick up a guitar and just play with a couple of friends. I would contend that the improvisor is better prepared to understand and even make music. I’ll bet Neil Diamond can pick up a guitar and jam.

Randall Munroe, creator of the webcomic xkcd, from a TED talk that’s making the rounds:

What I love is that math lets you take some things you know and just by moving symbols around on a piece of paper find out something you didn’t know that’s very surprising. I have a lot of stupid questions and I love that math gives the power to answer them sometimes.

If you want to understand the Common Core’s fourth math practice standard, “Model with Mathematics,” you could do a lot worse than studying the mental feats Munroe performs in every single post of his What If? blog.

I think the bit immediately prior is worth quoting as well, even if it’s a bit harsher:

And I love calculating these kinds of things, and it’s not that I love doing the math. I do a lot of math, but I don’t really like math for its own sake.

Like on Mythbusters, Monroe is rarely content to stop with answering the question as stated: he generally keeps going bigger, faster, taller, or hotter until something explodes.

The Most Interesting Use Of Educreations 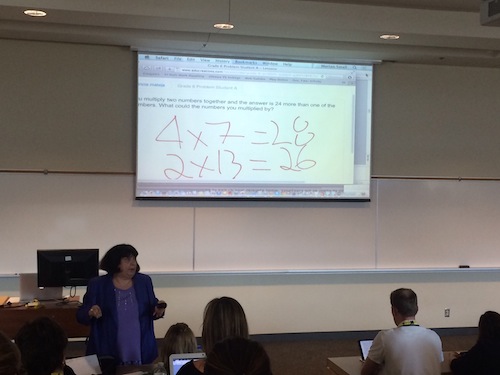 Before this last week’s OAME conference in Toronto, I’d only seen one use of Educreations: students record themselves teaching through a lesson or a problem as a kind of summative assessment. This assignment has been recommended to me in 100% of the tablets-in-education sessions I’ve attended. (Chris Hunter called the students “Khanabees,” which is clever.)

In her session at OAME, Marian Small used Educreations to show student thinking in its raw, unrehearsed form, full of loops and self-references, which for some purposes is more interesting than the polished Khanabees presentations.

The premise of her talk (PDF of her slides) was that the job of teaching comprises two very different, very difficult tasks:

So her session was simple, but engrossing.

An hour flew by.

This approach to representing student work has advantages and disadvantages relative to both scans of student work and videos that show the student and teacher. Rather than outline those differences myself, I’d rather take your thoughts in the comments.

If you’re into Talking Math With Your Kids or Math Mistakes, this approach to student work is worth investigating.

That is the most beautiful job description I’ve ever read.

I am not a teacher, but as a technologist/researcher, it strikes me we can, at least in the short run, have a lot more pedagogical insight with humans looking at a few these than machines crunching context-poor big data (even though I’ve argued the case of the latter before on this blog).

Android is the next logical platform for us to support, but we don’t yet see sufficient demand to justify the cost of development. We’re monitoring Android tablet growth within schools, but iPad is still over 90% of school market. It is already possible to replay our videos on Android, however.

We’re incredibly excited about this use-case. People are often surprised when I tell them that just over half of the 5 million videos on our platform have been created by students.