What We Can Learn About Learning From Khan Academyâ€™s Source Code, Ctd.

I’m used to seeing pedagogy manifest itself in lesson plans and classroom observations and curriculum and videos. It’s interesting, now, to see pedagogical decisions manifest themselves in web design and code also. For example, here’s some Javascript from Khan Academy’s box-and-whisker plot exercises. 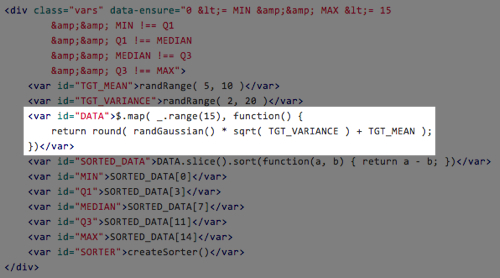 Head over to the exercise. Complete a couple. What pedagogical mistake has Khan Academy made in the highlighted lines? How would you fix it?

Don’t get put off by the code. If you’ve taught box-and-whisker plots, you can sort out the issue here.

Previously: What We Can Learn About Learning From Khan Academy’s Source Code.

This code will always generate 15 data points, and these points will not have any outliers (outside 1.5 * (Q3 — Q1)), so students can just pattern match and drag the lines to the 1st, 4th, 8th, 12th, and 15th places once they’ve sorted the data. It’s kind of fun the first time.

I think the largest error is the reliance on random numbers to provide a set of assessments that test an actual set of knowledge.

Random number generators are great for creating a large set of problems that are all basically the same, but in my experience you can provide better assessments/examples with a much smaller set of questions that are designed to illustrate the concept.

Others have danced around it, but the fundamental flaw (as in some, but not all, Khan exercises) is that you get

seven straight times, without any change in structure or difficulty, even though the underlying task has a huge variation in structure and difficulty.

I’ve updated the exercise so that it now includes anywhere from 8 to 15 points, so students are forced to deal with two middle numbers, both in finding the median and in finding the quartiles.

[Makeover] Tire Marks   [Makeover] Meatballs
Unless otherwise noted, everything you and I post here is licensed
for reuse under Creative Commons Attribution 4.0 International.