Uri Treisman’s Magnificent Speech On Equity, Race, And The Opportunity To Learn 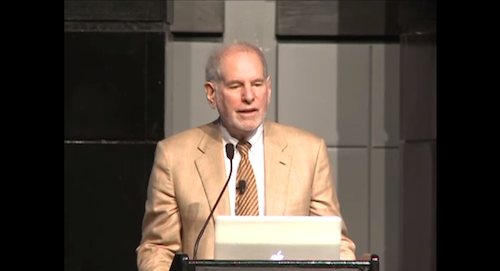 On April 19, 2013, the third day of NCTM’s annual meeting in Denver, Uri Treisman gave a forty-minute address on equity that Zal Usiskin, director of the University of Chicago’s School Mathematics Project, called the greatest talk he’d ever heard at the conference in any year. Stanford math professor Keith Devlin would later call it our “I have a dream” speech. At least one participant left in tears.

I’ve personally seen it three times. I got the video feed from NCTM and the slides from Treisman. I then spent some time stitching the two together, resulting in this video. His message is important enough that I’d like to use whatever technical skills I have, whatever time I have, whatever soapbox I can stand on, to help spread it.

You should watch it.

If none of those conditions apply to you, well, I can’t imagine the series of misclicks that brought you to my blog. Watch it.

Here’s a fair enough summary from Treisman himself:

There are two factors that shape inequality in this country and educational achievement inequality. The big one is poverty. But a really big one is opportunity to learn. As citizens, we need to work on poverty and income inequality or our democracy is threatened. As mathematics educators … we need to work on opportunity to learn. It cannot be that the accident of where a child lives or the particulars of their birth determine their mathematics education.

That was his destination and the talk took only three stops along the way:

A beautiful speech by Uri and a great contribution by Dan to put the slides with the video.

However, the quote about how the Common Core was written garbles the history badly. Here is a summary of the process.

CCSSO and NGA appointed a work team of about 50 people–educators, mathematicians, teachers, policy people–and asked me to lead it. They also appointed a writing team of 3 people–Phil Daro, myself, and Jason Zimba–to draft the standards. We solicited progressions documents from selected individuals or groups in the work team. The three lead writers produced a first draft based on these progressions. There was also a feedback group of about 20 people. You can find the pdf with the names of all these people by googling “Common Core State Standards Work Team”.

Minor iterations of the standards were circulated to the working team for comment and critique, of which there was an abundance. Major drafts (about 3 or 4) were circulated to the feedback group and the 48 participating states, which also produced a huge amount of commentary. Finally, a public comment period starting in March 2010 elicited about 10,000 comments, of which we looked at every single actionable comment.

Michael Pershan calls into question the data behind one of Treisman’s conclusions:

I’m now going to show you two graphs that I don’t believe anyone in the math community has seen.

All of these countries do well on PISA even though they have considerable child poverty. I put together a fuller picture of the data in this post, with links to the data that (I think) Treisman used.

Contest: Do You Know Blue?   “How To Learn Math,”Â An Online Course From Stanford Math Education Professor Jo Boaler
Unless otherwise noted, everything you and I post here is licensed
for reuse under Creative Commons Attribution 4.0 International.