The Digital Networked Textbook: Is It Any Different?

Let’s speculate that before this year’s cohort of first-year teachers retires from math education more than 50% of American classrooms will feature 1:1 technology. That’s a conservative prediction — both in the timeline and the percentage — and it’s more than enough to make me wonder what makes for good curricula in a 1:1 classroom. What are useful questions to ask?

Here’s the question I ask myself whenever I see new curricula crop up for digital networked devices like computer, laptops, tablets, and phones.

Is it any different?

That isn’t a rhetorical or abstract question. I mean it in two separate and specific ways.

If you print out each page of the digital networked curriculum, is it any different? 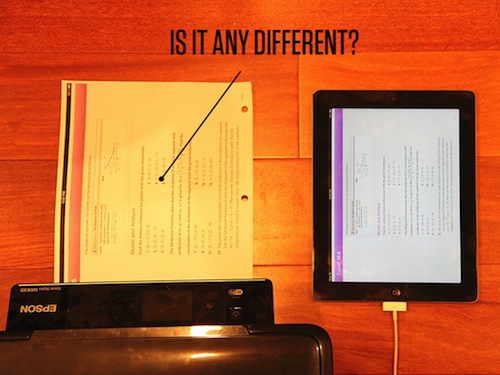 The answer here is “sort of.”

When I look at iBooks in the iBookstore from Pearson and McGraw-Hill or when I see HMH publish their Algebra Fuse curriculum in the App Store, I see lots of features and, yes, they require a digital medium. They have a) interactive slider-type demonstrations, b) slideshows that walk students through worked examples, c) stock video in the margins instead of stock photography, d) graded multiple-choice quizzes, e) videos of Edward Burger explaining math concepts and f) probably other items I’m forgetting. None of those features would survive the downgrade to paper.

So the question becomes, “Is it different enough?”

Are these offerings different enough to justify the enormous expense in hardware, software, and bandwidth? Do they take full advantage of their digital birthright?

I don’t think so.

“Is it any different?” here means “if you were hundreds of feet below the surface of the Earth, in a concrete bunker without any kind of Internet access, is the curriculum any different?” 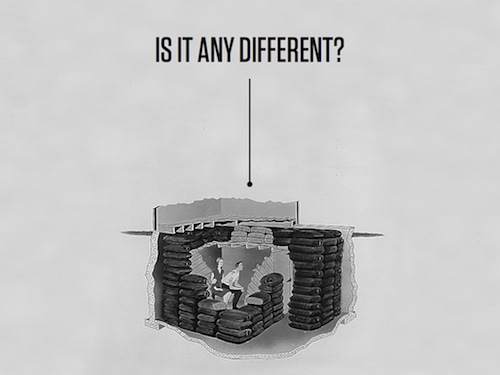 Here, in September 2013, the answer is “no,” which is a shocking waste of very expensive, very powerful device.

Look at the apps you have on the home screen of your smartphone and ask yourself “how many of these are better because they have a large network of people using them?” Me, I have 12 apps on my homescreen and eight of them — Tweetbot, Messages, Instapaper, Instagram, Phone, Mail, Safari, Spotify — are so much better because of the crowd of people that use them with me. When I switch off my phone’s network connection, they get so much worse. Those are the apps I care most about also, the ones that enrich my life, the ones that justify the expense of a smartphone.

Digital devices should allow you to:

Networked devices should allow you to:

There are other possibilities, of course, some of which we’ll only start to realize as these tools are developed. But don’t just sit around and wait for an industry as reactive as textbook publishing to start making those tools for you. Publishers and their shareholders react to their market and that’s you. As long as they can still profit by repurposing existing print curriculum they will. It’s on you to tell your publishing reps that the curriculum they’re selling doesn’t do enough justice to the powerful, digital networked devices they’re putting them on. It isn’t different enough.

2013 Sep 27. And here’s LA Unified buying a billion dollars worth of iPads and then wasting the network that might make that investment worthwhile:

By Tuesday afternoon, L.A. Unified officials were weighing potential solutions. One would limit the tablets, when taken home, to curricular materials from the Pearson corporation, which are already installed. All other applications and Internet access would be turned off, according to a district “action plan.”

This is always a problem in the early stages of a new technology. The “Technology Adoption Life Cycle” has proven itself over and over for the last 20 years to be the gold standard in analyzing tech markets.

The “innovators” adopt a technology because they need to be the first kids on their block to have whatever it is. The “early adopters” see strategic advantages and uses for it – and they are willing to put up with what they perceive as minor inconveniences like limited optimized uses in order to gain the advantages they seek.

That moment of “crossing the chasm” into the mainstream is that moment when a technology catches fire because vendors have figured out a way to reach beyond the techno-enthusiastic “early adopters” who have sustained their businesses to the techno-unimpressed “early majority” customers who are the major “show-me” skeptics. These skeptics form the first mass market for a technology, followed only later – and reluctantly – by a “late majority.”

Seems to me that we are still very much in an “early adopter” market in the race for digital textbooks. No one knows the “killer app” for digital curriculum is going to look like, but we do know it might bear some slight resemblance to the analog textbook. But this will not

As Steve Jobs always used to say, the “killer app” for the iPhone was making a phone call. But it was all the supporting infrastructure tht was built in (seamlessly integrated contacts, e-mail, texting, reminders, calendar, notes, & management of the technology) that transformed the act of making a phone call.

Great Classroom Action   Pennies, Pearson, And The Mistakes You Never See Coming
Unless otherwise noted, everything you and I post here is licensed
for reuse under Creative Commons Attribution 4.0 International.