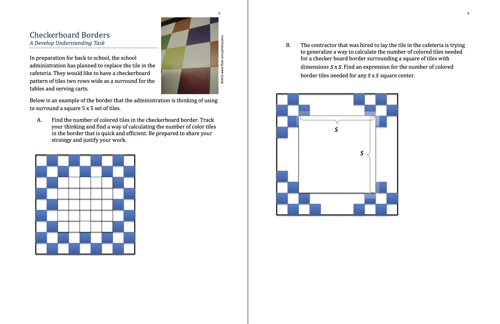 This task comes from the Mathematics Vision Project, a free curriculum from some sharp Utah educators. This is the first task in their “Secondary One” curriculum, a variation on the classic Pool Border task.

Tell your students, “I’m going to show you a picture for only a few seconds and I want to know how many blue squares you see. Just a guess. Don’t overthink it. Go from the gut.”

Show this image for a few seconds. 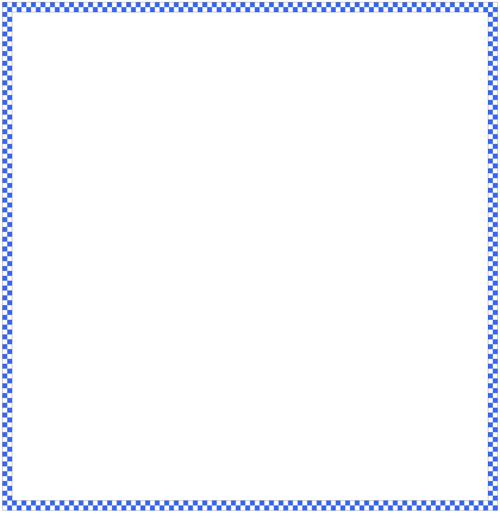 Ask them to think-pair-share their guess.

Tell them, “I know that if you had to, you could count up those squares one-by-one. But that sounds like a lot of work. Let’s look at some smaller versions of the pattern and see if we can think smart rather than working hard.”

Pass out this handout [pdf]. 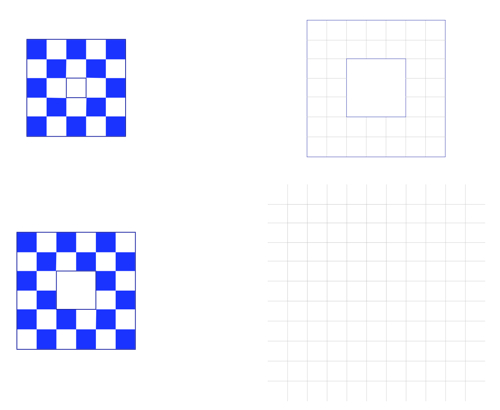 It has the four earliest iterations of the pattern. They have to count and/or construct each one, which should give them a better intuition for the pattern than the original task does.

Ask them to write down and share a fast way to figure out the number of blue tiles in the twentieth iteration of the pattern. (I initially wrote “Ask them not to draw it” here but I don’t think they’ll find drawing it all that enticing. That’s the point of using larger numbers.)

Ask them to share how they’re thinking about the number of blue tiles. They’ll help each other here.

Then show them the twentieth iteration and see if they were right. 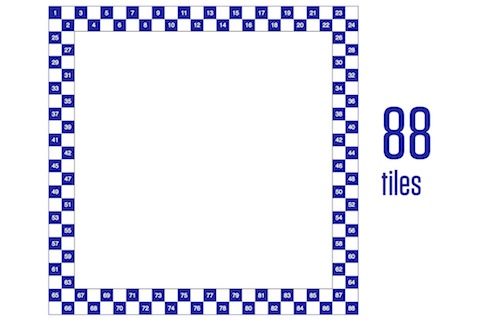 Now we tackle the huge square. We give students the information they want. The huge square is the 100th version of the pattern.

Some may generalize to a formula now. I imagine most will still just apply the informal verbal method they created earlier. Say, “If you can turn this sentence into variables, then a computer can handle any problem of this sort instantly and we’ll be done with them forever.”

Ask them to take their answer for the huge square and reconcile it against the error boundaries they set up earlier.

If students generalize to a formula in different ways, show those different formulas and connect them to the ways of thinking they shared earlier. Ask students to reconcile the differences. How are the formulas different? How could they turn one formula into the other?

We’re trying to challenge students who finish quickly here and buy ourselves some time to help students who need it.

Show the answer. Find out who had the closest original guess. Have the class give that student one clap. 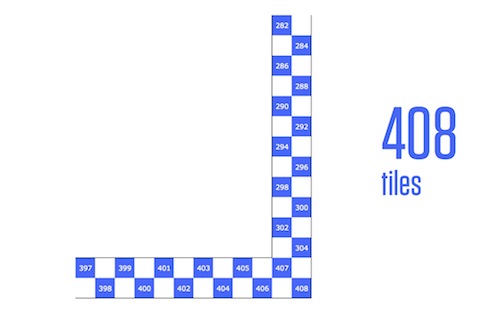 What does the real world buy us here? I know what the cafeteria context costs us. It costs us an extra page to include all that text. It costs us some participation from our English Language Learners. That’s fine if we get something worth all that cost, but I can’t see what we’re getting.

Lately, when I work with math teachers, I encounter a particular theory of student engagement that says, “Make the problem about something the students are familiar with or which is close to their everyday lived experience.” On Twitter, for instance, Sarah Lowe suggests students may be more intrigued by stones or gardens.

I don’t think this is wrong. But I think we overestimate the effect of swapping the context from checkerboard cafeteria tiles to a checkerboard dance floor or a checkerboard stone walkway or a checkerboard pizza platter while leaving the rest of the task intact. I just don’t think students are that easily placated, so I haven’t focused on context at all in my makeover. We’re just counting up abstract blue tiles in my task. Instead I’ve tried to start the task easy enough to bring in a lot of students and end hard enough to be worth their time, with or without any context.

I’d like someone to convince me that adding a context would raise a student’s heart rate over this problem, but I have a hard time seeing it.

I just did this activity in my College Algebra course (I teach at a two-year college) as an introduction to sequences and series.

19 students in class, 18 participated. (1 student walked out and came back when the activity was over.) I teach in an ‘active learning classroom’ with desks set up in groups. 4 groups of students working the problem together and individually.

3 different models for the pattern were given to me. I had already created my own model, and the 3 in class were all different from mine.

Each group explained their thinking. Most had not generalized their approach into algebra.

I helped them put it into algebra. I also showed that we could simplify the algebra for each approach and end up with the same thing!

Comments on the lesson:

This activity took about 20 minutes from start to finish. I definitely think it was time well spent! Thanks!

The Gathering Of The High Council Of The Math Teacher Bloggers   Negative Times A Negative
Unless otherwise noted, everything you and I post here is licensed
for reuse under Creative Commons Attribution 4.0 International.