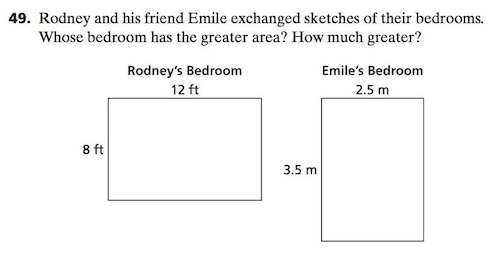 That’s everything. If I’m teaching this material tomorrow, I don’t have time to whip up a video or a photo.

So I’ll tell students, “Two students drew pictures of their rooms. Which is bigger or are they both the same?” (Good catch from Chris Lusto on Twitter: “‘How much greater?’ omits the possibility they have equal area. Why do that?”) 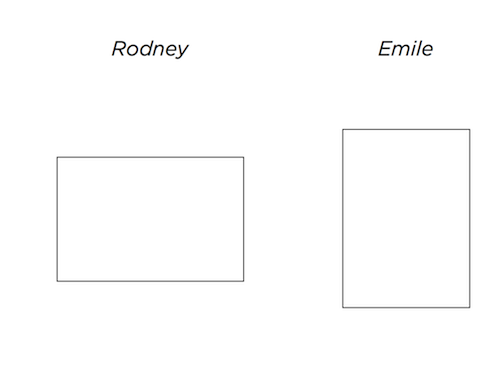 I’ll ask them to write down their guesses, then share with a neighbor. Then we’ll take a quick poll.

A student may ask if the two drawings are at the same scale, which would make for a nice, quick discussion (“Good eye. That’s really important to know. They are.) but it isn’t an essential moment.

I’ll say, “Okay. I’m going to give you the width and height of the rectangles and we’ll find out who guessed correctly. But first I have some bad news. Rodney is from the United States and Emile is from France. Do you know why that’s bad news?” 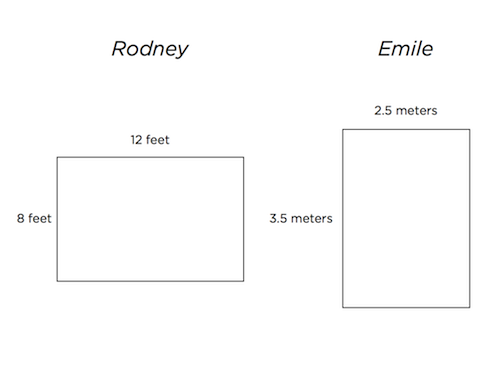 Here’s what I expect to be pretty interesting as students work with the fact that there are 3.28 feet in a meter:

Good ideas from the blogs:

Good ideas from the Twitters:

@ddmeyer instead of asking whose room is bigger, maybe ask which room would need more carpet (or other type of flooring)

@ddmeyer tie in linear equat & $$ to purchase/install carpet. Also if every so many sq ft requires an elec outlet how many would there be

@ddmeyer Picture of soccer field vs picture of football field. Soccer data in m and football in yards. Which one is bigger?

@ddmeyer I'd remove the numbers, the last sentence, and maybe add "They want to know if their rooms are fair." #mathchat

@davidwees The word "sketch" is misleading. Measurements suggest precision, "sketch" does not. Would add they're siblings. @ddmeyer

@davidwees or that they are exchange students, one in US, one in Canada. Will rooms during exchange be similar to home rooms? @ddmeyer

@ddmeyer 1) Draw a picture of your bedroom. Estimate the dimensions (don't specify which units); 2) Who has the biggest bedroom?

If you have a textbook task you’d like us to consider, you can feel free to e-mail it. Include the name of the textbook it came from. Or, if you have a blog, post your own makeover and send me a link. I’ll feature it in my own weekly installment. I’m at dan@mrmeyer.com.

Negative Times A Negative   The Unengageables
Unless otherwise noted, everything you and I post here is licensed
for reuse under Creative Commons Attribution 4.0 International.