School geometry seems to me one of the most lifeless topics in all of mathematics.

All metaphor aside, geometry class is by far the most mentally and emotionally destructive component of the entire K-12 mathematics curriculum.

… eventually we reach a question that sort of requires proof; it seems true, but is non-obvious, and it has arisen from the questions we have been asking about how properties relate to each other.

Questions that require proof are hard to create, hard to package in a textbook, and probably impossible to crowdsource. You’re trying to nail that point where the seemingly-true hasn’t yet turned into the obviously-true and that spot varies by the class and the student.

For example, “Square matrices are always invertible” might strike that enticing balance for one student while for another its truth is too obvious-seeming to be worth the effort of a proof and for others it’s too foreign for them to have an opinion on its truth one way or the other.

This is tricky, right? And Danielson offers us a description but not a prescription. He describes the satisfying proof process in his classroom but he doesn’t prescribe how to make it happen in ours.

No one I respect thinks students should discover all of geometry deductively. But as Harel, et al, say in a paper that has fast become the most meaningful to my current work:

It is useful for individuals to experience intellectual perturbations that are similar to those that resulted in the discovery of new knowledge.

To motivate a proof, students need to experience that “Wait. What?!” moment of perplexity, the moment where the seemingly-true has revealed itself, a perturbing moment experienced by so many mathematicians before them.

That’s more useful and more fun than the alternative: 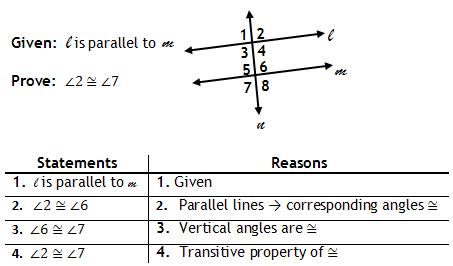 The problem here isn’t just the coffin-like two-column stricture. The proof doesn’t arise from “a question that requires proof” but from a statement that has been assigned. That statement makes no attempt to nail the gray, truthy area Danielson describes. It informs you in advance of its truth. It’s obviously true! You just have to say why. Tell me anything more lifeless than that.